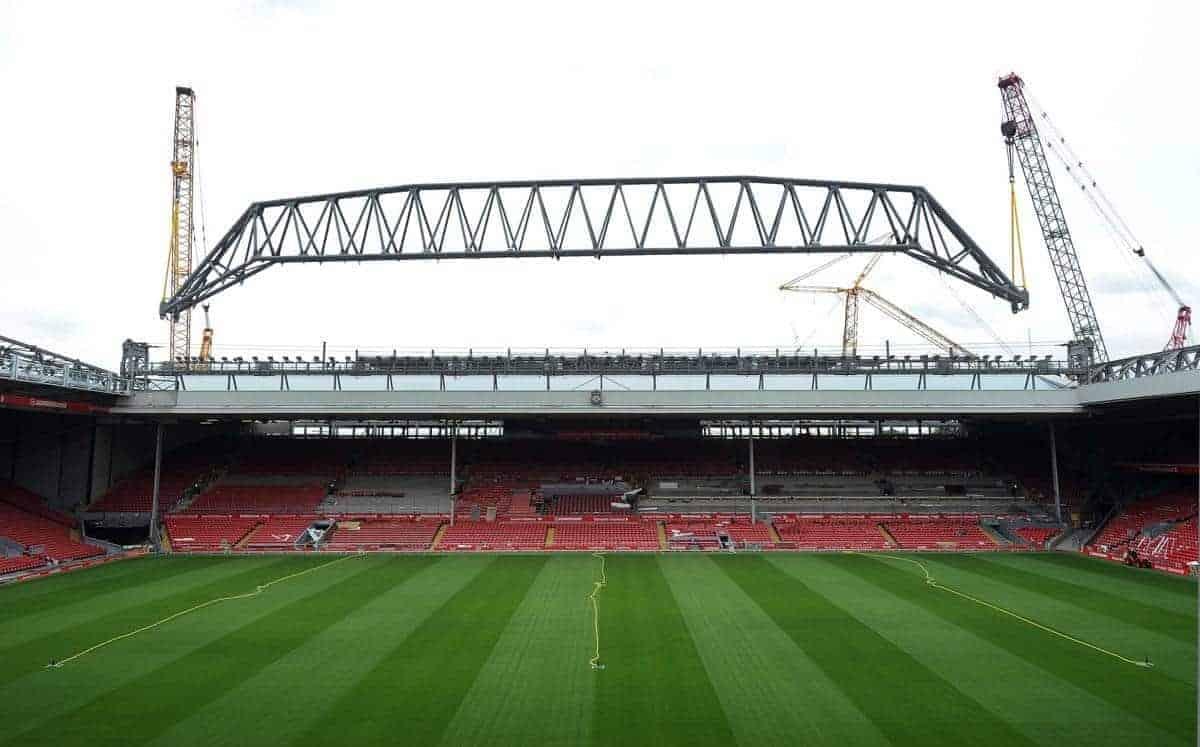 Fenway Sports Group are delighted with the progress being made on Liverpool’s Main Stand redevelopment at Anfield, and are in talks with commercial partners over naming rights.

Friday saw a significant milestone in the redevelopment process with a 650-tonne roof truss being lifted over the Main Stand, changing Anfield’s skyline forever.

Taking time to reflect on the project so far, FSG president and Liverpool FC director Mike Gordon told the club’s official website that all plans are on schedule.

“Work is progressing well and despite the fact that this is a complex project, we are on track in terms of budget and schedule,” he said. “We still expect that the new Main Stand will be open to fans and hospitality guests at the start of the 2016-17 season, which will be an impressive accomplishment by everyone in Liverpool who has worked on the project. John, Tom and I are grateful for their efforts.”

Gordon also confirmed that the club are speaking to interested commercial partners over naming rights for the new stand, although reiterated that stadium naming rights are not up for sale.

He explained, “Candidly, we’ve had a lot of interest in this area from third parties. While Anfield will always be Anfield, we are in fact in the market for a naming partner for the new Main Stand.

“Thus far we have had a number of very interesting conversations encompassing a wide range of partnership options. In reality, any Main Stand commercial sponsorship will ultimately depend on what potential partners are looking to achieve from such a relationship.

“I believe we at FSG have been clear all along that we intend to be creative and bold in all of our commercial activities in an effort to generate more revenue, which in turn is used to increase funding to those parts of the club that help us win football matches.”

Interestingly he hinted that any potential deal over naming rights could be a broader business arrangement, with fresh investment in the club not ruled out.

He added, “It is worthwhile to point out that these deals can entail complex discussions around a wide spectrum of possibilities, from naming rights and hospitality packages to bundling with other sponsorship opportunities across the club and under the right conditions, even to outright investment.

“The common thread to all of these options, or any other commercial activity of LFC, is that they must help to accomplish the goal of generating additional resources to invest in LFC in order to move the club forward and win trophies.”

For further information on the expansion of the Main Stand please visit www.liverpoolfc.com/stadium-expansion.

All photos and video courtesy of Liverpool FC.