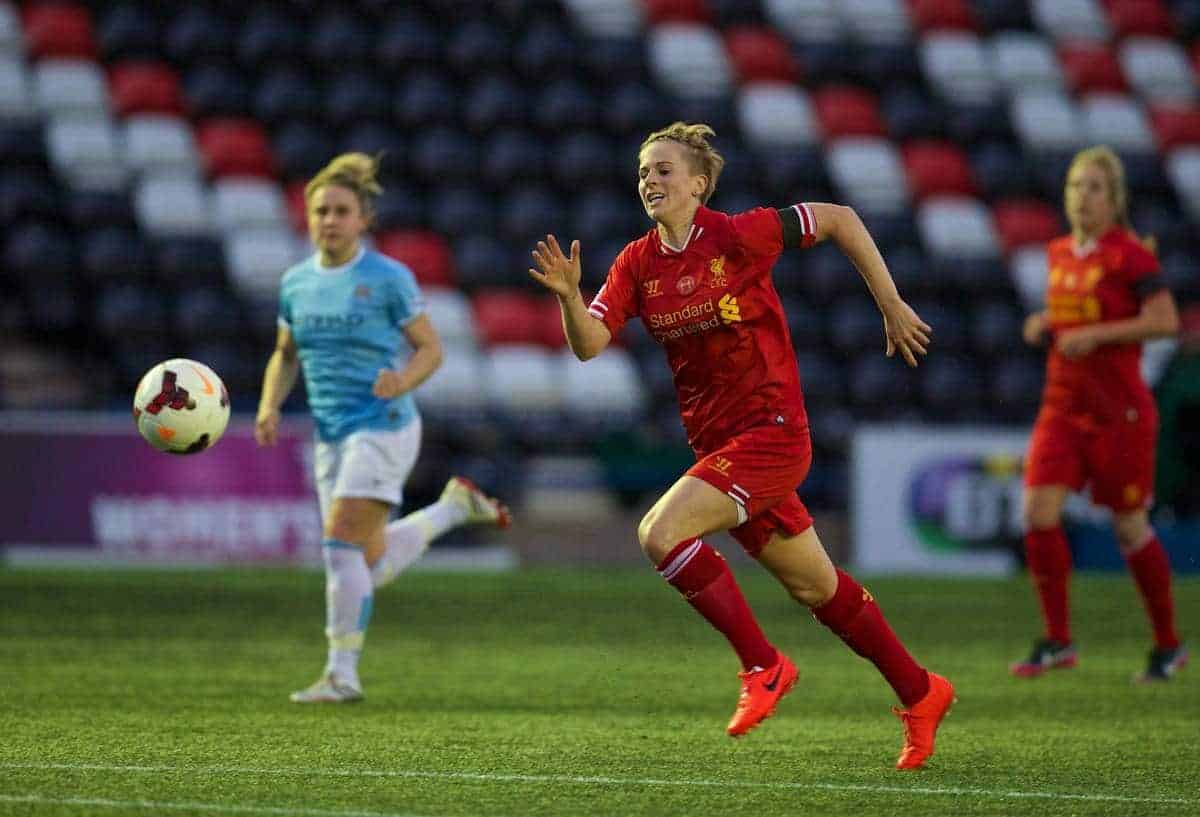 LFC Ladies recorded a fine 2-0 victory in the Merseyside derby on Thursday evening with a brilliant display from Reds striker Natasha Dowie.

Liverpool’s no. 9 scored the quickest goal of the season in the Continental Cup tie at the Select Security Stadium in Widnes on Thursday evening.

It was Dowie back to her best and Matt Beard’s side responded in brilliant way after their disappointing defeat to Notts County over the weekend.

Despite having limited options in squad selection due to injuries of Fara Williams, Asisat Oshoala and Satara Murray, Beard rotated the squad well with surprise role for striker Kate Longhurst playing as a left-back. Lucy Staniford was back in squad after the injury while Corina Schroder was named on the bench.

The spectators enjoyed their first derby of the season and the Reds impressed with the total dominance from the early minutes of the game. A mistake in the Everton defence caused a losing a goal as former Blue Natasha Dowie intercepted a short backpass from Vicky Jones and put it past Everton goalie Kirsty Levell after her first shot bounced off the Blues keeper.

Levell made the problems for herself in the early stage of the game with her poor goal-kicks and clearances and one of it almost caused her conceding another goal. Dowie collected Levell’s poor clearance, but the keeper made up for her mistake and saved the shot from Reds striker.

Liverpool went close to doubling their lead again but shot from youngster Maz Pacheco went just wide off the post.

The Blues had their first chance to level the score just after half-hour as Emily Holinshead forced Libby Stout to make a fine save. The Blues grew in confidence and five minutes later Michelle Hinnigan beat Stout, but the inside of the post denied her from levelling the score.

Three minutes later on the other side Line Smorsgard put a brilliant pass to Rosie White, but the new Reds recruit shot was well-held by Levell.

On 54 minutes Dowie scored a goal after brilliant move, but it was disallowed for offside. Dowie however, was on the mark on 60 minutes and this time she couldn’t be denied. A mix up in Everton penalty area led the ball to Liverpool’s no. 9 who took advantage from another Blues defensive error and had no problems with putting the ball into the net from six yards.

Dowie was on the mark again after a brilliant forward move from Longhurst who run to the edge of the penalty and after Staniforth’s efford was saved by Levell, Dowie’s goal celebrations were cut short and ruled out for offside again.

It was an impressive display from Liverpool Ladies with fine performances from Dowie and another excellent game from youngster Maz Pacheco. Matt Beard’s side are preparing for Sunday’s league trip to Birmingham and with eying the return of the injured players, they will be hoping to bounce back from league defeat and rejoin the title race.