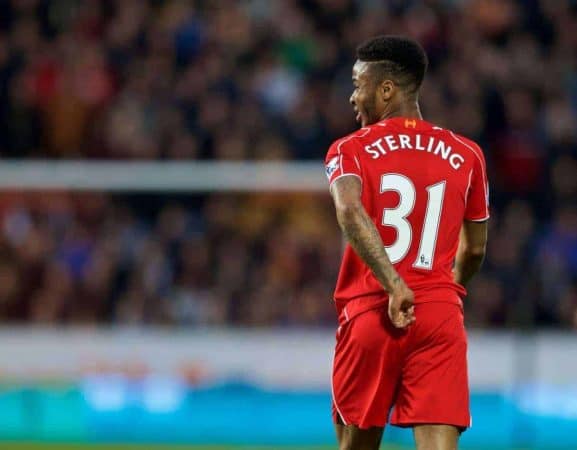 Following reports that Raheem Sterling would be included in Liverpool squad for their pre-season tour, the forward has asked to stay behind, reports claim.

Reports earlier on Tuesday suggested that wantaway Liverpool forward Raheem Sterling would travel with the squad for their pre-season tour of the Far East and Australia.

However, further reports have now revealed the 20-year-old has asked to be left in England.

This has opened up the possibility of a third bid from Sterling’s suitors Manchester City, who have so far failed in their attempts to prise the European Golden Boy from the Reds.

Andy Hunter of the Guardian writes: “Sterling has left Brendan Rodgers in no doubt over his determination to push for a transfer to Manchester City by informing the Liverpool manager he wants to be left out of the pre-season tour of the Far East and Australia.

“The England forward has held talks with the Liverpool manager since returning to training on Monday.

“It is understood he not only reiterated his desire to leave this summer but asked to be omitted from the two-week trip to Thailand, Australia and Malaysia.

“Liverpool’s squad depart for Bangkok on Sunday and are not due back on Merseyside until Saturday 25 July.

“It also opens the way for City to make a third offer for the winger, who is under contract at Liverpool until 2017 on a £35,000-a-week deal.

“Liverpool have not had contact with City since their second bid was rejected last month, although a fresh approach is expected soon.”

Liverpool value Sterling at £50 million, and have so far rejected bids of £35 million and £40 million as they hold out for the full fee.

Hunter continues: “Whether Liverpool accede to Sterling’s request to be left out depends on an acceptable offer arriving from City before Sunday rather than the player’s wishes.”

If Sterling does leave, however, Hunter has suggested two possible replacements.

“Barcelona winger Pedro is a possible target despite only recently signing a four-year contract with the European champions,” he said.

“Denis Cheryshev, the Real Madrid winger who spent last season on loan at Villarreal, is another option that appeals to the Liverpool manager.

“Rodgers also hopes to add the Aston Villa striker Christian Benteke to his squad before the start of the campaign, irrespective of whether Sterling stays or goes.”

This should serve as a prompt for City to up their offer for the forward, and if Sterling leaves, Liverpool will be expected to make further big moves in the transfer market.

The likes of Benteke and Pedro would join Danny Ings, James Milner, Adam Bogdan, Joe Gomez, Roberto Firmino and Nathaniel Clyne through the entrance door at Anfield this summer.