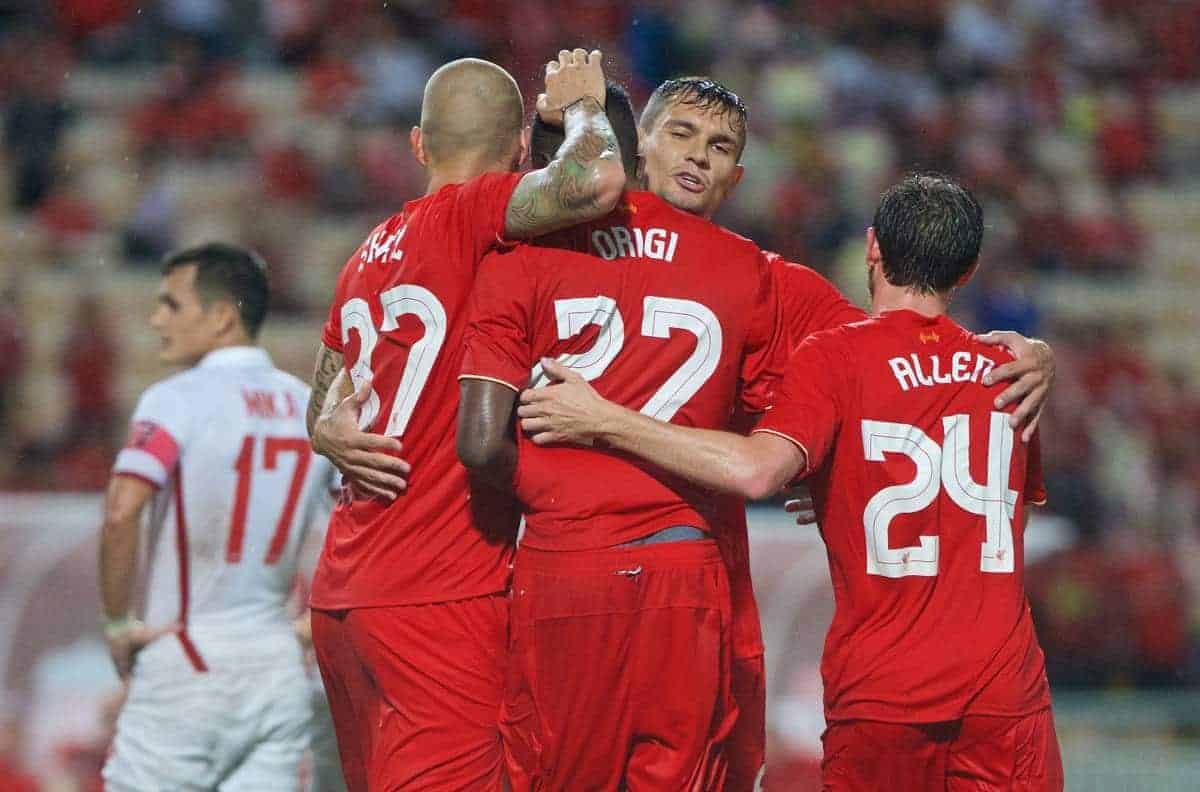 Liverpool started their pre-season tour of the Far East and Australia with a 4-0 victory over the True Thai All Stars in Bangkok.

It was a strange pre-season opener for Liverpool as they played out a 4-0 victory of the True Thai All Stars in testing conditions at the Rajamangala Stadium in Bangkok on Tuesday.

Switching from a sticky, humid first half to a downpour of monsoon proportions after half-time, Brendan Rodgers’ side were put through their paces by the Thailand climate.

Nevertheless, with four goals and a clutch of bright performances, Liverpool can be pleased with this win.

Fielding a different XI for each half, Rodgers will have learned some important things about his side going into the 2015/16 season.

Starting off in a 4-4-2 diamond formation, Liverpool looked to overrun the All Stars with some intricate work in the central areas.

Rickie Lambert and new attacking signing Danny Ings operated as a forward two, with Lazar Markovic in a free-flowing No. 10 role just behind the English pair.

It was Markovic who burned brightest in the first half, and the Serbian put the Reds in front after just three minutes.

Latching onto a through ball from the equally impressive Joao Carlos Teixeira—returning after breaking his leg in April—Markovic rounded the All Stars goalkeeper and prodded home.

The 21-year-old has much to prove this pre-season, and his flair was crucial in the first half.

Ings had the ball in the net on 24 minutes, but Mamadou Sakho was adjudged to have fouled the goalkeeper in the build-up after a great delivery from the corner from Teixeira, while young midfielder Jordan Rossiter should have scored with a point-blank header eight minutes later.

Sakho put the Reds 2-0 up as they approached the break, however, with a thumping header of his own—again from a Teixeira corner.

Switching to a lineup that resembles closer to what will be expected against Stoke City on the opening day of the Premier League season, Rodgers’ 4-3-3 kept up the pace as the rain poured.

Combining well throughout, new Reds captain Jordan Henderson and compatriot Adam Lallana worked to put the Reds 3-0 ahead on 52 minutes.

After some great footwork from the 27-year-old, he found the corner of the net with a low drive.

The English pair’s quality was matched by the persistence of new arrival Divock Origi.

The Belgian, who troubled the All Stars’ goal all afternoon, first clipped the post, then was foiled by a great save from the Thai goalkeeper before setting up Milner for a run on the edge of the area with a clever flick.

He then side-footed a volley against the woodwork before finally finding the back of the net with a bullet header from a Henderson corner.

A charitable referee ended proceedings shortly after the 90-minute mark as the Reds were crowned winners of the True Super Trophy.

Though it was only a warmup friendly, Rodgers will be pleased with his side’s efforts.

Markovic, Teixeira, Ings, Origi, Henderson, Sakho and Joe Gomez in particular point to a bright 2015/16 campaign ahead for Liverpool.