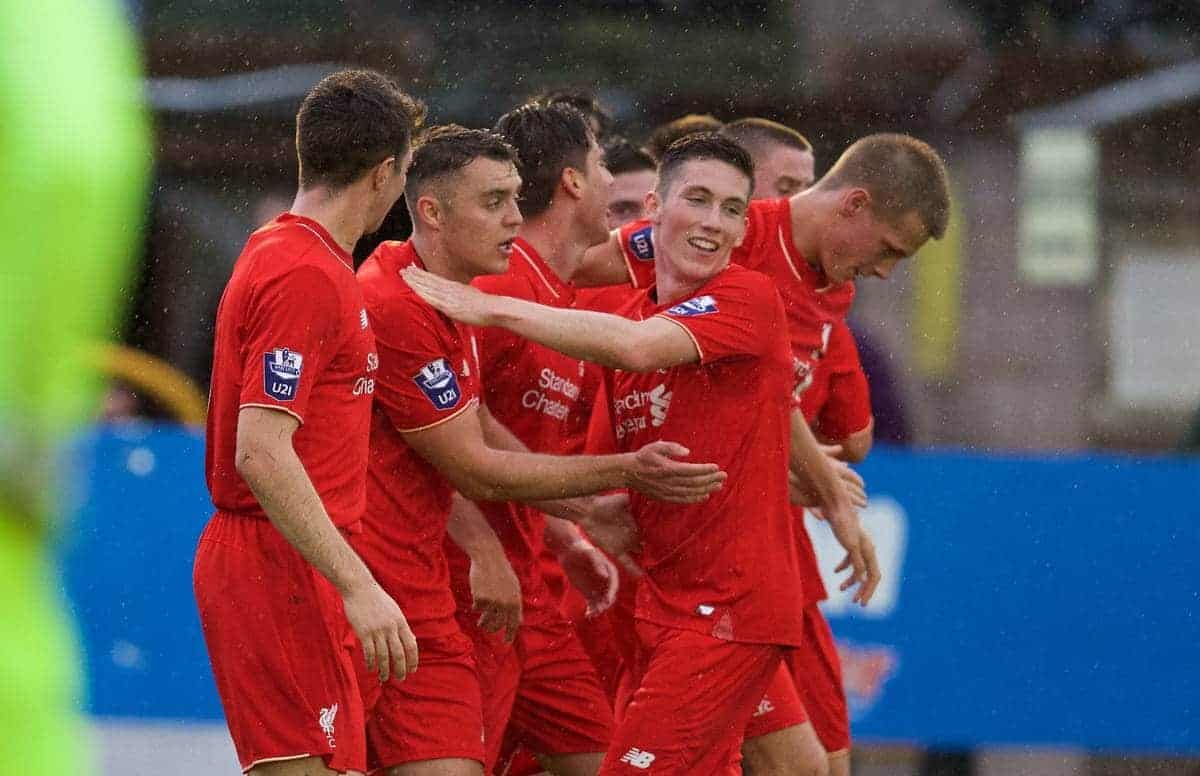 Liverpool Under-21s drew 3-3 with their Merseyside rivals Everton on Wednesday night, with Joao Carlos Teixeira impressing for the Reds. It was a veritable game of two halves for Liverpool’s Under-21s side as they went from 3-0 up to draw 3-3 with their Everton counterparts at Southport FC’s Haig Avenue on Wednesday night.

A rumoured 100-strong host of scouts attended the game, with the likes of Wilson and Canos linked with loan moves away from Merseyside this summer.

Perhaps most desperate to make an impression however was one star on the cusp of the first team.

But how did Teixeira and the rest of Liverpool’s young stars perform in Wednesday night’s victory? As is typical within Liverpool’s youth ranks, Michael Beale’s side were deployed in a first-team-aping 4-2-3-1 formation.

Jordan Rossiter and Cameron Brannagan operated as the midfield pivot, with the former assuming the deep-lying role of Jordan Henderson and the latter serving as the U21s’ James Milner alternative.

Rossiter sat in front of the Reds’ defence more often than not while Brannagan pushed forward, pressing and harrying the Everton back line.

Ahead of the duo, Teixeira, Canos and Wilson supported lone striker Jack Dunn, with the attacking-midfield trio’s roles very similar to those of Philippe Coutinho, Adam Lallana and Jordon Ibe under Brendan Rodgers this term.

Canos drifted inside from a right-wing position, while Wilson did the same from the left.

Teixeira filled Coutinho’s No. 10 role, as the U21s’ principle playmaker and link between midfield and attack.

Unlike the senior side, Dunn operated as a drifting off-the-shoulder striker, with his qualities far removed from those of Christian Benteke.

Arguably as a result, the young Reds played a slick attacking game in the first half in Southport.

Unfortunately, Everton‘s switch to a three-man defence and the introduction of Pedro Chirivella in the second half saw Liverpool’s tactics stutter, with the Toffees taking control in a fast-paced encounter.

The result is never the focus in youth-team games, however, and some of the young Reds’ performances will have encouraged both Beale and Rodgers. “Our boys know from being away with the first-team squad in the summer that the level is a lot higher than U21s football,” Beale said prior to the game.

“So maybe for one or two of the boys they will have to seek a loan experience first because as we’ve seen from Jordon [Ibe], he went to Derby and then came straight back into Brendan’s first team.

Seeing the progress Jordon has made should give the likes of Sergi Canos, Ryan Kent and Harry Wilson every bit of confidence that if they go on the same path the way he has, then they will get a chance as well.”

With the Reds’ U21s manager hinting at prospective loan moves for some of his young stars, and a plethora of scouts on hand at Haig Avenue, this was a big opportunity for Wilson, Canos and Co. to impress.

Those with a keen eye for a future star will have been buoyed by the performance of Wilson in particular.

The Welsh winger was bright from kick-off in his left-sided attacking role, both cutting inside to drive into the box and surging towards the byline to trouble Everton‘s right-back, compatriot Gethin Jones.

It was Wilson’s intelligent movement that saw him into a dangerous area on the edge of the penalty area in the first 15 minutes, where he was hauled down by Mason Holgate.

Dusting himself off to convert the resulting spot-kick, Wilson marked a performance of true promise.

Along with Wilson, Dunn was bold and persistent as Liverpool’s lone striker and the midfield tandem of Brannagan and Rossiter dovetailed excellently. Furthermore, despite his introduction arguably unbalancing Beale’s formation, Chirivella supplied some nice touches in the buildup.

Ryan Kent, who remained on the bench throughout, will have been disappointed to have been kept out of the lineup with a view to earning a temporary move. The star turn on the night, however, was undoubtedly Teixeira—the 22-year-old was a class apart from his U21s team-mates.

After contributing with some strong performances for Rodgers’ first team during pre-season, Teixeira has been relegated to a reserve role so far in 2015/16, with the manager preferring to name both Danny Ings and Divock Origi on his subtitutes’ bench despite playing a single-striker system.

Nevertheless, despite a lack of game-time the Portuguese midfielder was in fine form in Southport.

With great skill on the ball and understanding of space, Teixeira was able to drift and carve open opportunities through tight gaps in the Everton back line.

Ostensibly filling Coutinho’s No. 10 role—and wearing the No. 10 shirt—Teixeira took up the Brazilian’s mantle as Liverpool’s most valuable player.

His fine long-range strike early in the first half, after turning and driving towards the Toffees’ penalty area, capped an impressive attacking display.

However, there was more to Teixeira’s game than playmaking. As he showcased during his season-long loan with Brighton & Hove Albion last term, Teixeira’s work rate and defensive contribution were invaluable as the Reds applied pressure in the first half, with his 22 years lending him a comparatively imposing physique.

He did tire in the second half, but after a bright all-round performance Teixeira can have one eye on the first team.

With the likes of Lallana and Ibe failing to impress so far this season, and Coutinho withdrawn late into the second half in Monday night’s win over AFC Bournemouth, there could be a role for Teixeira in Rodgers’ side.

Bringing the Portuguese off the bench late on would inject some energy and creativity in close ties for the Reds.

After a standout performance in the Liverpool U21s’ 3-3 draw with Everton on Wednesday, Teixeira could view a squad position for the seniors in the coming weeks.