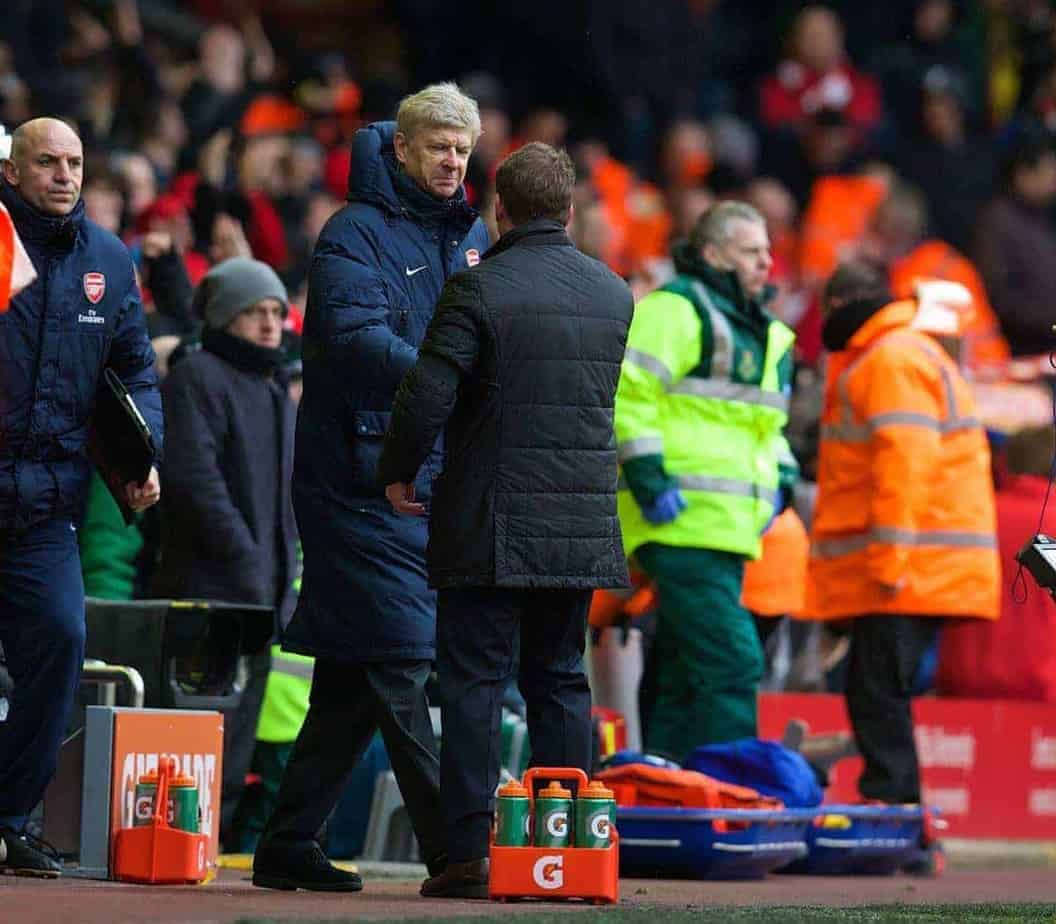 Should Brendan Rodgers stick with his faltering 4-2-3-1 formation against Arsenal on Monday, Liverpool could be in for a long night, writes Henry Jackson. The Reds will make the visit to north London on Monday knowing that victory will take them six points ahead of Arsene Wenger’s side after just three games of the Premier League season.

Two wins from two, despite not playing particularly well, is a positive start for Liverpool, and the hope is that they will continue to kick on at the Emirates.

That will be much easier said than done, however, with Arsenal‘s ground one that the Reds have not had much to shout about at in the past.

Since Arsenal made the short move from Highbury to the Emirates in 2006, it has proved to be troublesome for Liverpool time and time again.

They have picked up just one win there in all competitions in the nine years since it opened- a 2-0 win in August 2011- and the performances have often been dire.

Even that 2011 triumph like a bit of a cheap victory, in truth, with youngster Emmanuel Frimpong getting himself sent-off with the score at 0-0, and Aaron Ramsey scoring a very unfortunate own goal late in the day. Other than that, the only other real high point has been the dramatic late draw Kenny Dalglish‘s Reds side achieved in April of the same year, with Dirk Kuyt’s late, late penalty salvaging a point.

From a resounding 3-0 loss in 2006- who else remembers Steven Gerrard and John Arne Riise bickering?- to last season’s 4-1 battering, Liverpool have endured much misery on the turf of their top-four rivals.

Brendan Rodgers will be hoping to put a stop to that come Monday night, but there are real concerns about the system he will likely use for the showdown in England’s capital. We all know that Rodgers can be stubborn, much like Rafa Benitez during his time in charge at Anfield, and he has total faith in his own ability.

His formation of choice for the gritty wins over Stoke City and Bournemouth has been the 4-2-3-1, but it has not looked convincing at all.

Jordan Henderson and James Milner have been left outnumbered at times, with the former sitting deep and the latter pressing further up the field- a ‘double pivot’ for the hipsters among you- and that will play into Arsenal‘s hands.

The Gunners’ most potent weapon is their midfield. It has a lovely balance to it these days, and is probably the most impressive in the league on its day.

With Francis Coquelin marshalling the troops from his holding role, Aaron Ramsey offering box-to-box industry and Santi Cazorla running the show with his trickery and creativity, Liverpool will be in for a serious game.

Throw Mesut Ozil and Alexis Sanchez into the equation, who will sometimes drop deeper in order to affect the game, and it’s easy to see why the 4-2-3-1 could be disastrous for Liverpool.

You only have to look at the recent 2-0 win Wenger’s men had against the Reds in November 2013 to find the perfect example of it not working against Arsenal.

Steven Gerrard and Lucas Leiva were deployed alongside one another in the second-half that day, once Rodgers had changed from a 3-5-2 system, and they were completely overrun.

Philippe Coutinho was too attack-minded in his ‘number 10’ role, and Henderson had bizarrely been moved to right-back.

4-2-3-1 can be a suicidal way to play against a side as fluent and dangerous as Arsenal are in midfield, and Rodgers is asking for trouble if he uses it again on Monday. There have been some rumours doing the rounds that Rodgers is intending to play exactly the same starting eleven for Liverpool’s first four matches this season, prior to the international break.

This is sure to frustrate many Reds supporters, who are not only voicing their concerns about the 4-2-3-1, but also the personnel involved.

Henderson should be fit, despite limping off early in the second-half against Bournemouth, with Milner again his partner.

Hopefully Rodgers goes with the 4-3-3 against arsenal with can starting.Need that extra protection infront of the defence.#LFC

Some may claim that the English duo have far more legs than Gerrard and Lucas did back in 2013, and will therefore deal with Arsenal‘s midfield better, but that will not solve the problem.

Emre Can should come in in place of Adam Lallana or Jordon Ibe, solidifying the midfield and helping negate the threats the Gunners pose.

Even Lucas, who may well be on his way out of Anfield, would be a reliable option, as Jack Lusby eludes to.

The rest of the team picks itself, with Simon Mignolet, Nathaniel Clyne, Martin Skrtel, Dejan Lovren and Joe Gomez the first-choice back-line, and Coutinho occupying the central attacking midfield role behind Christian Benteke.

A trip to the Emirates is always a tough 90 minutes for Liverpool, but Rodgers really is playing into Arsenal‘s hands if he opts for a 4-2-3-1 formation.

Wenger will be licking his lips at the thought of Coquelin, Ramsey and Cazorla dominating Henderson and Milner, and there is every chance his side will come out on top because of it.

A switch to a 4-3-3 or 4-4-2 diamond makes so much more sense for Liverpool, but Rodgers seemingly has his mind made up.

Perhaps the system will be a roaring success, with many proved wrong, but there is a real danger that those back-to-back clean-sheets will feel like a distant memory come 10pm on Monday evening.