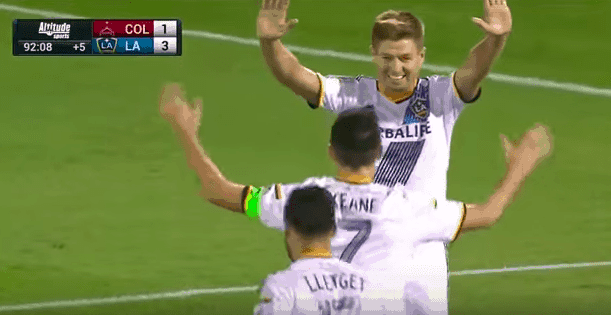 In the final seconds of the game, Keane ran clear into the Colorado half, and using Gerrard as support played a one-two before sliding home.

Earlier goals from Sebastian Lletget and Alan Gordon had turned a first half 1-0 deficit around for Galaxy.

The pair played together at Anfield when Liverpool signed Keane from Tottenham in the summer of 2008, but the Irish forward’s career didn’t last long, being sold back to Spurs six months later.

Keane scored 5 goals in 28 appearances for the Reds, whilst Gerrard netted 186 times in 710 games for the club before leaving earlier this year.

It was Galaxy’s first away win in almost a year, and Gerrard said he was relieved to have broken their poor form away from home.

Gerrard will be making a return to England this season as one of the pundits for BT Sport’s coverage of the Champions League.