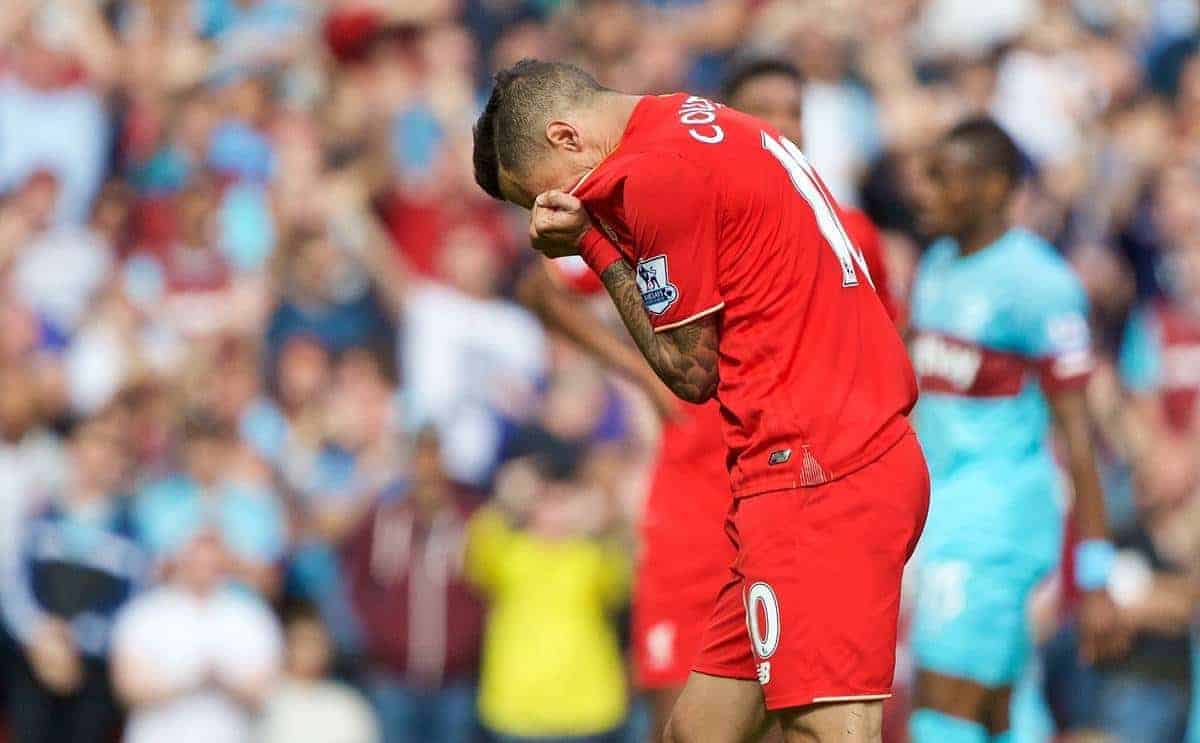 Benji Deane takes a look at the decisions facing Brendan Rodgers during this international break – particularly in defence and following Coutinho’s dismissal.

Questions have been raised since Liverpool’s eye-opening defeat to West Ham in front of the Kop on Saturday, and it seems Brendan Rodgers is left with decisions to make and much work to do during the international break. But what are the key issues for the Reds manager and how can he solve these?

I’m sure I can speak for all Reds fans in saying that Saturday is a day best forgotten in a hurry. But for one man, Rodgers, the humbling by the Hammers will provide food for thought over the coming days. With the international break upon us, Rodgers evidently has a lot on his hands to restore the early season optimism built on three clean sheets.

Granted, only Philippe Coutinho‘s magic saved us away to Stoke decisions went our way against Bournemouth, but the cautious positivity felt among the majority of supporters gave the thought that we were starting to walk the right path to rebuild. Shrewd signings, facilitated by a rarely seen sense of urgency by Ian Ayre and co, seemed to have done the trick. Big name signings in Benteke, Firmino, Clyne and Milner had the fans smiling again, and with raw talents Ings and Gomez acquired, the squad began to look revitalised.

One bad result later, and the media and a portion of fans are at pains to point out Rodgers’ and Liverpool’s failings. Saturday’s 3-0 loss could be a blip, but whilst I for one believe it is just that, the Anfield management must look at several key issues arising from that game.

Nobody needs reminding of the frailties and poor decision making of our centre backs in that match. A horror show from Lovren, and a costly clearance from Skrtel set the tone for a bad day on Merseyside. Wind back to before kick-off however, and the pair were praised – and rightly so – for largely solid performances, aided by the superb Gomez and Clyne. So how can this be rectified?

Wherever it did go wrong, Rodgers will be criticised for his selections in that area in light of the result. Perhaps a recall for Mamadou Sakho doesn’t feel too far off.

After a reported £20m fee, some would argue that it would hinder Lovren’s progress to drop him, and it seems that a knock to the confidence is all he needs after a shaky performance this weekend. Rodgers must work with Lovren to assure he is confident and quick in the making decisions. But others would point to our options in the squad in Sakho and Ilori, and this could prove the way forward.

With many missing for the international break, it will leave little time for Rodgers to work with a full squad before a crunch tie with Manchester United, and as such I believe that wholesale change is not the answer – or at least yet.

Sakho has shown himself to be arguably our best defender, and as an assured physical presence, a recall for the France international is surely the right decision here. Rodgers will have the full period of the break to work with him and many Reds fans would feel more comfortable seeing his name on the team sheet come 12th September.

Skrtel however, is a different kettle of fish all together. He divides opinion; whether it be his tendency to shirt pull in the area or make defensive errors, or his tenacity and knack of producing vital blocks. One wonders, given his errors and the fact that he is not getting any younger, whether it would be time to give Tiago Ilori a chance.

The 22-year old Portugese has turned down a loan move to Sunderland and I would welcome an opportunity for the youngster to prove his worth this season. However, with perhaps one of the biggest games of the season in United away on the horizon, this may not be the right time for him to step in. That said, I wouldn’t bet against him featuring before the Christmas fixtures are upon us.

How to cope without Coutinho

Another sore subject from Saturday is the dismissal of Coutinho. He was clearly distraught to have been sent off, but perhaps more distraught will be Rodgers, who now cannot select his star player for the trip to Old Trafford. So how does the manager deal with this?

In my eyes, given the length of the break, a change in shape could prove beneficial. The 4-4-2 diamond system, used to such success in recent times, can be an asset to a strong squad against the Red Devils and there is evidence to suggest Rodgers’ favoured 4-3-3 has not been as productive as it could have been. A gap of 14 days will give enough time to work on any change in system and for players to get to grips with this.

Although three clean sheets have been kept, we have scored just two goals, and aside from the countless chances created away against Arsenal, we still lack that killer consistency in the final third. Benteke has looked promising, but could surely do with more assistance up top, and new recruit Danny Ings should be given a chance against United.

Benteke’s hold-up play has been brilliant since his arrival from Aston Villa, and I can’t help but think that playing Ings just off his shoulder to make use of that threat would make us more potent up top. Ings is a versatile striker, and his cameo against West Ham means he should be given more opportunity.

The loss of Coutinho is a definite headache, but should be seen as a positive for Liverpool. It has long been said that new arrival Roberto Firmino’s best position is in the hole behind the striker(s), and Rodgers should use the United fixture as a chance to test his ability in his preferred position.

Firmino’s work ethic and hunger to chase back and press means another dimension would be added at the top end of the midfield, and his eye for a pass will help feed Benteke and Ings up top.

How the Reds could line up

Using the 4-4-2 Diamond system, Rodgers should line up as follows:

GK: Mignolet
The selection of the Belgian international is a no-brainer here, and I’m backing Mignolet to build on his recent clean sheets agains United.

Defence: Clyne, Skrtel, Sakho, Gomez
Whether or not Rodgers decides to stick with Lovren remains to be seen, but I’m going with Sakho to provide reassurance and a physical presence at the back alongside Skrtel. Young Gomez has proved a great buy at a reported £3.5m, and along with Clyne, should definitely start.

DM: Can
Can will be high on confidence now, after his call up to the Germany squad, and his recent powerful performances and his ability to turn defence into attack quickly should see him start ahead of Lucas.

CM: Henderson (c), Milner
Providing Henderson is fit, there is no contest here and the workhorses that are Henderson and Milner will get the nod.

AM: Firmino
Despite an unspectacular performance against West Ham, Firmino’s best position is attacking midfield and now that Coutinho has been ruled out of the game, Rodgers should look to test that theory and start the Brazilian behind the strikers.

ST: Ings, Benteke
Up top I’ve gone with the pairing of Ings and Benteke. Former Burnley striker Ings deserves a full opportunity soon, and I believe he would thrive on Benteke’s hold up play. We’ve also not looked too likely to stretch defences this season, other than the Arsenal game, and giving Daley Blind and Chris Smalling an extra strong striker to contend with along with Firmino will cause more problems than we did on Saturday.