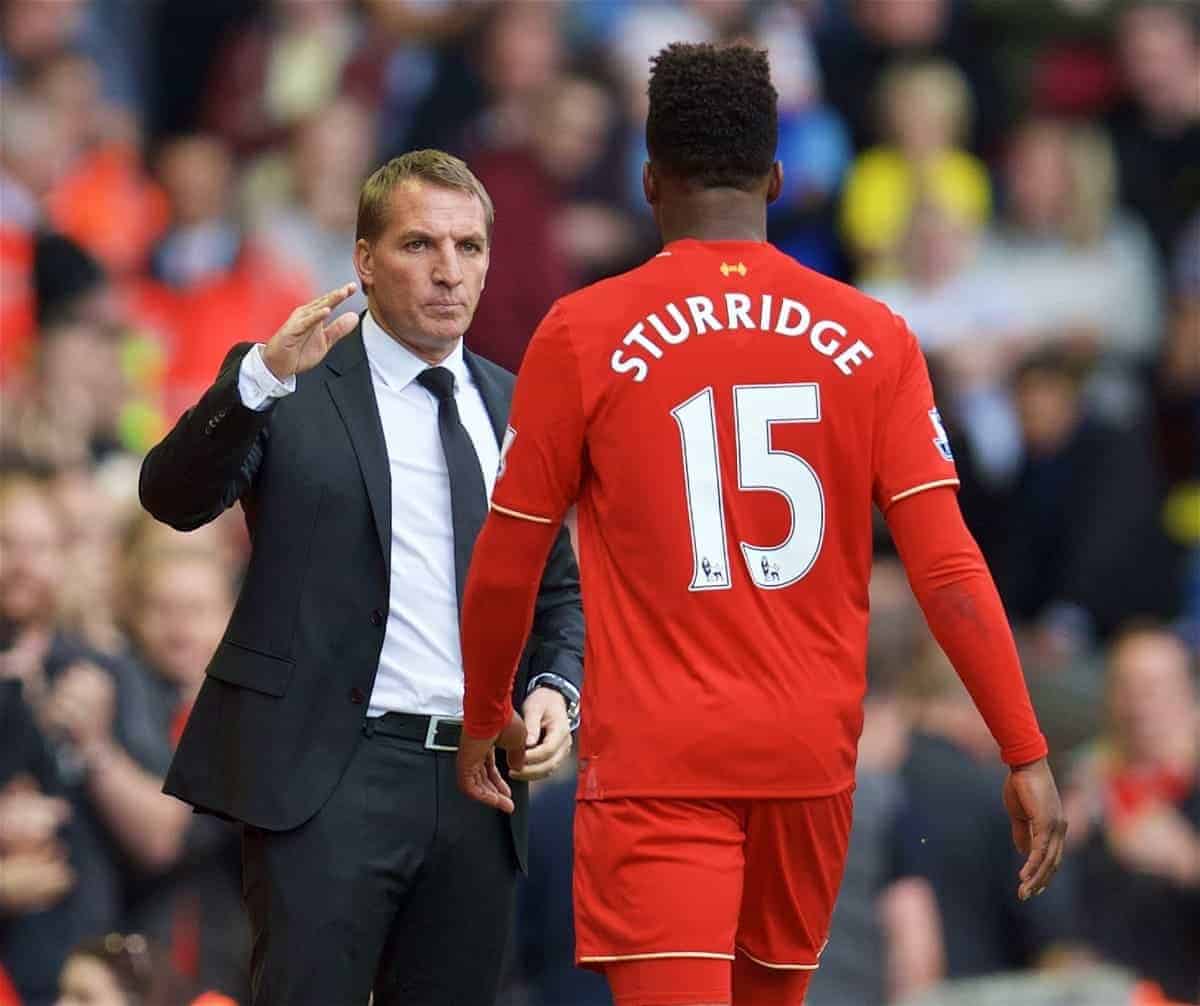 Daniel Sturridge‘s two-goal performance inspired Liverpool to a 3-2 win over Aston Villa, and Brendan Rodgers has much to be positive about as a result.

Finally, a moment of positivity for Liverpool supporters.

Though Rudy Gestede’s brace made things difficult for Brendan Rodgers’ side at Anfield on Saturday, an early goal from James Milner and two from Daniel Sturridge secured the Reds a vital Premier League victory.

Sturridge in particular will have lightened the load on an increasingly under-fire Rodgers.

Here are five talking points from Liverpool’s 3-2 win over Villa.

Quite why Rodgers persevered with the 4-2-3-1 and 4-3-3 formations of the early games of the season is unfathomable: they’ve never worked for him with a post-Luis Suarez Liverpool, but the manager continued to revert to factory settings with little to no gain.

Thankfully, this performance once again underlined the virtues of his progressive 3-4-1-2 formation—tweaked from last season’s successful incarnation to accommodate a pair of centre-forwards.

There is a much better flow to Liverpool’s attacking game in this system, with the 3-4-1-2 magnifying the talents of the majority of Rodgers’ outfield players.

A prime example of this is Alberto Moreno, who is thriving after being tasked with greater attacking responsibility in a wing-back role.

Rodgers’ sides are renowned for their attacking proficiency, with the less said about their defensive stability the better—the same can be said of his outfit at Anfield on Saturday, but the 3-4-1-2 has at least inspired Liverpool to a much higher standard of performance.

Liverpool’s improved attacking display was underpinned by the fragility of their defence, with the three-man back line of Emre Can, Martin Skrtel and Mamadou Sakho troubled by the powerful Gestede and full-backs Jordan Amavi and Alan Hutton.

Gestede presented a threat in last season’s FA Cup quarter-final clashes between the Reds and his former club, Blackburn Rovers—even knocking Skrtel unconscious with an early challenge in the initial tie.

Signed as a replacement for Liverpool-bound Christian Benteke, Gestede is a monster in the air, and his two goals here underlined this.

Gestede won more aerial duels (six) than any other player, with Sakho particularly at fault for the Benin international’s second goal.

Important stat from a defensive perspective: Alan Hutton & Jordan Amavi made seven crosses today vs. #LFC. Too many! pic.twitter.com/LtzU9JhxBG

Amavi and Hutton relentlessly exploited gaps between Sakho and Moreno, and Can and Clyne, delivering seven dangerous crosses into the Liverpool penalty area.

It can be argued that Gestede’s aerial prowess would trouble any Premier League defence, but there is much work to be done for Can, Skrtel and Sakho in this respect—they should not be bullied by a player with such scant technical ability.

An Interesting Role for Philippe Coutinho

In the opening games of the season, Philippe Coutinho was by far and away Liverpool’s best player—but this led to Rodgers over-relying on the Brazilian, fielding him in a confused role as winger, No. 10 and auxiliary striker.

This eventually saw the Brazilian frustrated with his attacking output, firing 10 shots on goal in last Sunday’s 1-1 draw Norwich City and hitting the target just twice.

At Anfield on Saturday, however, the 23-year-old was deployed in an intriguing role in Rodgers’ midfield three.

Philippe Coutinho was quietly effective as No. 8 for #LFC today – a much better position for him, creatively. pic.twitter.com/GcUKw94ztE

Dropping back closer to defensive midfielder Lucas Leiva in the midfield, Coutinho took up a No. 8 role, maximising his creative talents: laying on two assists for his team-mates.

This was balanced well with the overlapping Milner, as well as Lucas, who performed excellently breaking up play in the middle of the park, making 11 successful tackles.

Coutinho was given more freedom to create in this new role, and Rodgers should note just how effective he was against Villa.

Daniel Sturridge is Back in Business

After a promising 63-minute display against Norwich, Sturridge announced his return from a long-term injury layoff in style with his two goals at Anfield on Saturday.

The 26-year-old had spent almost six months on the sidelines with a hip injury, and with Liverpool struggling to convert chances without him, this return came at a pivotal juncture.

Though still lacking match sharpness, as evidenced by his sloppy first touch and seven losses of possession, the effect Sturridge had on Liverpool’s attacking unit was invaluable—his movement, holdup play and defence-stretching pace contributed to a much-improved overall display.

That he will be disappointed not to have come away from Anfield with a hat-trick is testament to his influence on Saturday, and the knock-on effect for Rodgers may be vast.

The manager was in desperate need of a victory over Villa, with pressure mounting on his position on Merseyside—and the 42-year-old will be grateful for Sturridge’s intervention.

It Was Only Aston Villa After this result, Rodgers rightly noted how Liverpool are now five points off the top of the Premier League table, but also rather bizarrely stressed that his side and supporters should not get “carried away” with this victory.

The manager may block himself out from media criticism during times of trouble such as this, but Rodgers surely must be aware of the malaise surrounding Anfield at present.

Few Liverpool supporters will be getting carried away after this win—it was, after all, only Aston Villa.

Tim Sherwood’s side set themselves up cynically, dropping deep and looking to counter whenever possible, and Liverpool arguably should have put the game to bed well before Sturridge’s second strike.

This will have bought Rodgers more time in the Merseyside hotseat, but the real challenge is yet to come.

October’s Merseyside derby will be the greatest indicator of progress, and Rodgers’ position is still under pressure, despite this Anfield triumph.