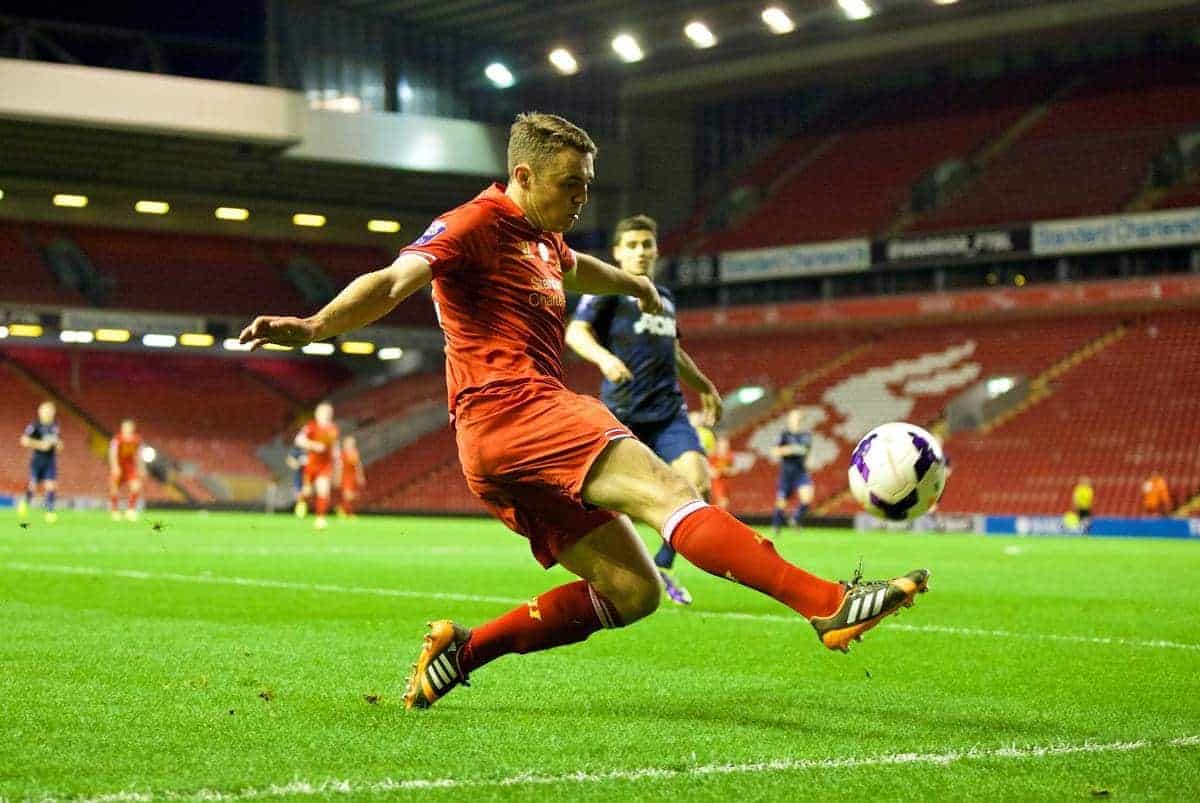 The squad Klopp inherited from Brendan Rodgers is decidedly thin and with injury to Joe Gomez meaning there’s no cover for either Alberto Moreno or Nathaniel Clyne at full-back, Randall has been named on the bench in each of Klopp’s opening three games.

The 20-year-old could be in line for a first appearance for the club in Wednesday’s League Cup tie against Bournemouth.

Klopp has stressed his faith in youth since his appointment as Reds manager, and this could see Randall thrive after his promotion to the senior squad.

But who is Randall, and can he establish himself as a long-term option for Klopp?

Joining the Liverpool academy at the age of six, Randall has steadily progressed through the youth-team ranks, becoming a mainstay under U21s coach Michael Beale towards the end of 2013/14, after captaining the U18s side.

This clearly brought Randall to the attention of former manager Brendan Rodgers, who called him up to his squad for Liverpool’s post-season friendly with Shamrock Rovers.

The Reds defeated their Irish opposition 4-0, with Randall replacing Ryan McLaughlin in the 63rd minute.

Last season, Randall continued his development under Beale, making 16 league appearances for the U21s as they came close to securing the U21 Premier League title.

Randall also spent a month on loan with League Two side Shrewsbury Town, but was limited to one, very brief substitute’s appearance during his time at the New Meadow.

A Liverpool-born defender, Randall’s presence in the first-team squad will come as a positive for many supporters, particularly following the departure of Steven Gerrard this summer, but as Klopp told reporters in October, this will have bear no factor on his inclusion:

“This part is very important for sure, but first of all we have to give these players enough time for development, for important.”

If Randall is to feature under Klopp, it is down to merit, so what can he bring the German on the field? Randall is a stocky, 5’9″ right-back, capable of supporting attacks with energy and consistency, as he showed in the Reds’ victory over Shamrock Rovers in 2014.

Receiving the ball from Cameron Brannagan on the right wing, Randall cut inside and surged towards the Rovers’ defence, ducking between defenders before slotting a perfectly weighted ball through for Jack Dunn, who finished with aplomb to put Liverpool 4-0 up.

Randall has deputised as a striker during his time in the academy, but it is undoubtedly in the defensive sector that he is most useful.

This season, he has been utilised as a right-back, centre-back, right midfielder and defensive midfielder, underlining not only his versatility, but also his defensive quality.

This will no doubt have endeared Randall to Klopp, who has plenty of gaps to fill in his Liverpool squad.

A passionate academy talent, Randall has shown his leadership qualities during his time at Kirkby and Melwood, as well as captaining the England U18s.

An aggressive, front-footed defender with attacking instincts, Randall could develop into a perfect understudy for first-choice right-back Nathaniel Clyne in Klopp’s first team.

But will he fit in under the German?

How Will Randall Fit in Under Klopp?

At present, Klopp’s only senior right-back option is Clyne, with both Joe Gomez and Jon Flanagan injured, and with Rodgers having sent Andre Wisdom out on loan to Norwich City—as well as terminating Javier Manquillo’s spell on loan from Atletico Madrid a season early.

This has seen Clyne overworked in the Liverpool defence, and calling Randall into the first-team squad represented a rational option for Klopp.

On paper, Randall has the qualities to succeed in Klopp’s attack-heavy system—Clyne has been seen to interchange with James Milner as Liverpool’s most-advanced right-sided option so far.

The major test now is whether Randall has the mentality to do so, though his endurance in the youth ranks suggest he could achieve this.

Randall is reportedly set to undergo contract talks with the club in the near future, and as Klopp referenced when asked about Brannagan’s new long-term deal, this suggests the manager has been impressed with his efforts so far.

Klopp said he “saw enough” from Brannagan to extend his terms, and that Liverpool’s young players have nothing to fear despite the potentially disruptive aspect of a new manager’s arrival.

His first test could present itself in the coming weeks as Klopp rotates his squad to counter a demanding fixture list.

Randall looks capable of proving himself to the German, and could look to emulate the success of Flanagan in 2013/14 by establishing himself as a regular option in the Liverpool first team.