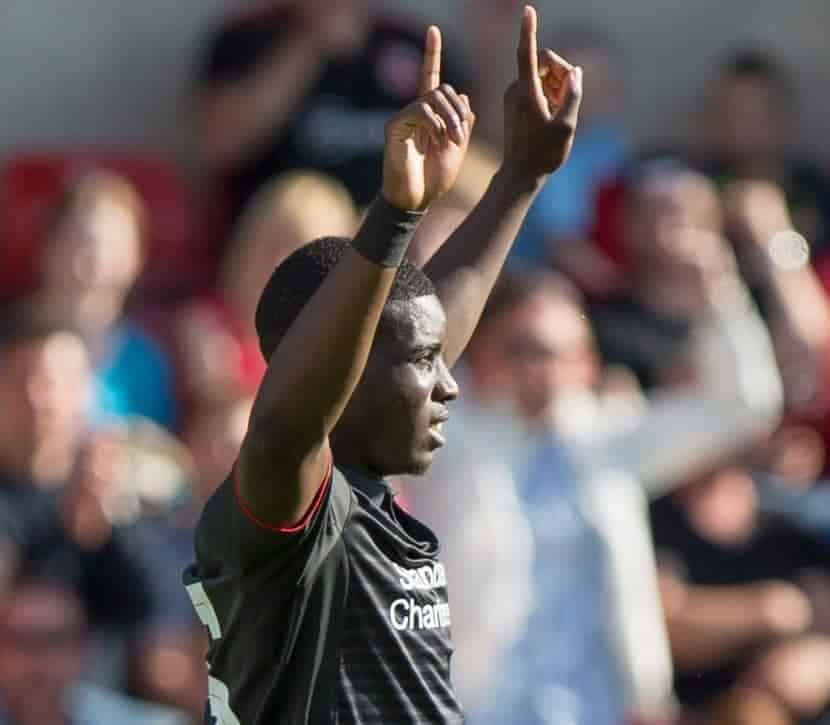 We round up how the 18 loaned members of the Liverpool squad performed for their temporary clubs over the weekend. After spending the international break with England’s U19 side, the Reds youngster returned to Championship action for Wolves on Sunday afternoon.

It would prove to be a miserable return to the Molineux side who slumped to a 4-2 loss at Derby, but despite the defeat, Ojo enjoyed a promising afternoon on an individual level after coming on as a second half substitute for Kenny Jackett’s side who trailed 4-1 when he was introduced.

Positively, the 18-year-old took no time to make an impact on arrival, instantly grabbing an assist for Adam Le Fondre’s consolation effort just a minute after entering, with an excellent looping header while back-peddling finding the striker who volleyed home.

Ojo will hope to build on his lively cameo and if he continues to impress with Wolves, it will be interesting to see if he could be the 2015/16 Jordon Ibe and earn a recall for first team duties at Anfield.

After a spell side-lined which ruled him out of action over the international break, Markovic returned to the Fernerbache side for their 1-0 win over Kayserispor on Sunday.

The Serbian started and played 63 minutes on the right side of midfield on his comeback, but he produced arguably the quietest performance of his Fener loan to date – despite creating a chance for Nani after a good run – before being replaced as Vitor Pereira moved to preserve his sides’ slender 1-0 lead.

Positively, Markovic appeared to come through the game unscathed and he will hope to rediscover his good form prior to injury when Fenerbache take on Ajax in the Europa League on Thursday night.

Vigouroux was the only of the three County Ground based Reds to feature for Swindon in their 2-0 defeat to Millwall on Saturday, with Williams and Stewart both missing through injury.

The Chilean stopper continued in goal for the Robins in the loss and though he will naturally be disappointed with conceding two goals, Vigouroux also made a number of good stops to keep the score-line at a level of respectability.

It was a poor result at the New Den and one that saw manager Mark Cooper sacked after the game – something that could have an impact on the loans of all three Liverpool youngsters currently at the club.

The Reds duo returned to Aberdeen after international involvement but it was an unhappy comeback as the Dons went down 2-0 to Ross County on Friday night.

Ward resumed duties between the sticks and though he wasn’t at fault for either goal – also making a couple of good saves to keep the score down – the Welshman couldn’t prevent his side slipping to a fourth straight defeat as he endures the first tough period of his loan spell.

Teammate McLaughlin continues to see his match action limited however, with the Northern Irishman again an unused substitute for Derek McInnes’ side, who have now suffered four straight defeats.

The Reds’ forgotten attacking midfielder enjoyed another 71 minutes of action on Sunday for loan club Deportivo La Coruna in their 2-2 draw against Athletic Bilbao.

Alberto – operating in the No.10 role – endured a quiet afternoon by his recent standards, failing to directly contribute an assist or goal despite having three shots, and his ineffective display saw him withdrawn just after the 70 minute mark with his side 2-0 down.

It would prove one of three inspired tactical changes by Victor Sanchez, with the man replacing the 23-year-old coming on to help complete a spirited fight-back setting up the last minute equaliser, and Alberto could now face a battle to keep his starting shirt.

Liverpool’s recently signed Nigerian striker played the first action of his loan spell with FSV Frankfurt during the international break – featuring in a friendly against Jurgen Klopp’s former club Mainz 05.

The 18-year-old played the second half of the game and produced a decent display in attack – which pleased manager Tomas Oral – where he almost registered on the score-sheet for his side in a game that finished 1-1, only to see his strike flash narrowly wide.

Disappointingly after a positive friendly showing though, Awoniyi missed out on Bundesliga 2 action once again at the weekend, as he was frustratingly left out of match-day involvement for Frankfurt’s 1-1 draw against Nurnberg on Sunday.

After a rewarding international break with England’s U19 side – for whom Kent scored in a 2-1 win over Turkey – the talented youngster returned to action for Coventry on Saturday afternoon.

He endured a relatively subdued first game back for the Sky Blues in their 0-0 draw with a Lloyd Jones-less Blackpool side, but he did come close to breaking the deadlock himself, only to see a curling effort well saved before being replaced after 78 minutes of the goalless stalemate.

What a day!! Great win for us. @10judgey WOW ????? Enjoy the victory bees!!! #Together #brentfordfc ??? pic.twitter.com/CQnjotLCpC

Canos made his first start for Brentford and played 69 minutes in the Bees’ 2-1 win over Rotherham on Saturday – a game which saw the Spaniard impress.

Though he didn’t make a direct contribution with a goal or assist, he caught the eye with an energetic display operating on the right of a three man attacking midfield, where he caused problems for the visitors with his dibbling and directness before being replaced after suffering with cramp.

The Italian striker was absent from the AC Milan match-day squad for their 1-1 draw against Torino, due to a hernia problem which saw him train on his own programme throughout the week as he recovers to full fitness.

Wisdom continues to see his game time limited for Norwich, with the defender an unused substitute for their heavy 6-2 defeat against Newcastle on Sunday – a result that could prompt manager Alex Neil to make changes and possibly reintroduce the Reds loanee to the XI.

Ilori’s wait for first team action at Aston Villa goes on, with the Portuguese defender again left out of the Villains’ match-day squad by Tim Sherwood for their trip to Chelsea that ended in a 2-0 defeat.

After playing 70 minutes for Wales U21s during the international break, Wilson returned to Crewe for their 1-0 League One defeat to Gillingham on Saturday but had to watch the 90 minutes from the bench as an unused substitute.

German striker Yesil was restricted to a second half substitute appearance for Luzern in their 1-0 defeat to Grasshoppers on Saturday night.

The youngster came on into difficult circumstances with his side trailing but was lively when he entered, though he couldn’t quite take advantage of two half chances that fell his way as Markus Babbel’s side pushed for an equaliser.

The young Brazilian completed another 90 minutes for SJK on Sunday, who moved to the top of the Finnish table with a 2-0 win over Inter Turku – a game which saw Allan turn in a lively performance despite not directly contributing a goal or assist on the day.

The Reds centre back continues his recovery from double surgery on a knee injury picked up, with the 20-year-old expected to be out for around two-to-three months as a result.