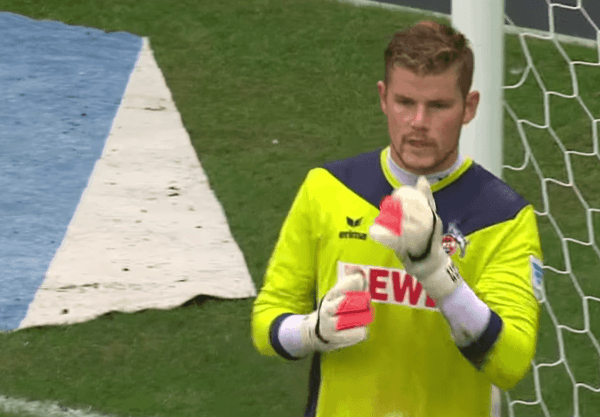 Reports in Germany suggest that Jurgen Klopp could look to the Bundesliga in January, with his sights set on Cologne goalkeeper Timo Horn.

With Klopp likely assessing his squad with one eye on the January transfer window, a move for Horn could see him shore up his goalkeeping ranks in the new year.

That is according to the German publication Bild, who suggest that Horn has been made a target by Klopp.

Relayed by Spox.com, Horn is said to have a release clause of around £6 million in his current contract with Cologne, set to expire in 2019, which would represent great business for Liverpool.

At 22, Horn has considerable first-team experience, after establishing himself as Cologne No. 1 in 2012/13, and has made 45 appearances in the Bundesliga, following their promotion last season.

This campaign, Horn has continued his steady progress between the sticks, including a star performance in October’s 3-0 win away to Schalke.

Horn made seven saves in that victory, and has averaged more saves per 90 minutes this season (5) than any other Bundesliga goalkeeper.

A towering presence at 6’3″, Horn has strong command of the penalty area, with great reflexes and shot-stopping ability.

Speaking to Bild in October, he listed his calming influence as one of his key strengths.

Continuing to discuss his future with Cologne, Horn avoided committing to the side for the long term.

“In football everything happens so fast,” he said. “[To promise to stay] in my eyes [would be] rather unrealistic.”

At around £6 million, Horn would be an astute signing for Liverpool—a player who could fill the No. 1 shirt for over a decade.

However, with tenuous reports also linking Liverpool with Barcelona’s German goalkeeper Marc-Andre ter Stegen this month, it could well be that this rumoured interest is mere conjecture.

Indeed, with Bild also linking Liverpool with a move for Bayern Munich forward Robert Lewandowski, it would be wise to take these reports with a pinch of salt.

But if Liverpool are interested in a signing another goalkeeper in January, Horn would be a great option.