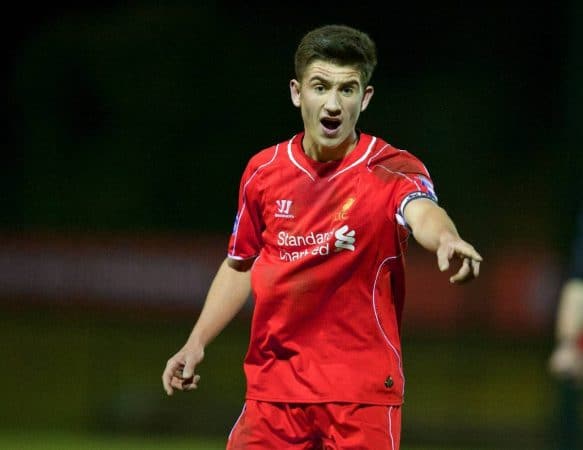 Liverpool U21s fell to a disappointing 3-2 defeat to rivals Man United on Monday evening, but there were many positives to discuss.

Lining up against United in a frenetic clash at Leigh Sports Village on Monday night, Micheal Beale’s Liverpool U21s will be disappointed to lose out in a close-fought 3-2 defeat.

Goals from Marouane Fellaini, Nick Powell and Sean Goss secured the victory for United, despite a strong comeback from the Reds in the second half.

Jerome Sinclair and Madger Gomes both found themselves on the scoresheet to bring Liverpool back to 2-2, but Goss’ goal provided the killing blow late on.

As ever, Beale will not be focussing on the result—more so the performance.

With that in mind, here are five talking points from the U21s’ 3-2 defeat.

Fielding an intriguing lineup from the start, Beale included three natural left-backs in what was a makeshift defensive line, with Joe Maguire at right-back, Jose Enrique at centre-back and Brad Smith operating in his familiar role on the left flank.

Though Enrique initially struggled to gain composure alongside Daniel Cleary at the heart of defence, his young team-mates both shone as Liverpool’s full-backs.

Smith, fresh from signing a new contract with the Reds after a summer of flirting with a move away, looked to impose his pace and physicality bursting forward into attack, and came close to setting up Sinclair on several occasions.

On the opposite flank, Maguire played with enthusiasm and vigour, making a number of dangerous, overlapping runs to combine with Harry Wilson, as well as contributing strongly in defence.

With Jurgen Klopp’s first team currently short at full-back, the German could consider Smith and Maguire as able backup options.

With a disappointing hamstring injury keeping Jordan Rossiter from appearing under Klopp in the first team so far, the 18-year-old made his long-awaited return for the U21s on Monday night.

Taking up his position at the base of Beale’s midfield diamond, Rossiter broke up play efficiently, found space to create openings with some neat touches and played several inviting passes from deep for the likes of Smith and Sinclair.

Lining up directly opposite the hulking Fellaini, Rossiter looked comfortably in dealing with his experienced opponent.

It wasn’t until Rossiter was withdrawn that Fellaini began to find space regularly in the Liverpool box.

Klopp will no doubt assess this performance and note Rossiter’s tactical intelligence and maturity in midfield, as the local lad is leagues ahead of his young colleagues. A first-team role awaits.

While names such as Rossiter, Cameron Brannagan and Pedro Chirivella are frequently mentioned as future stars of the Liverpool midfield—or, rather unhelpfully, the next Steven Gerrards—one player regularly avoids the attention: Alex O’Hanlon.

But the 19-year-old Irishman, in inspired form on the left flank of Beale’s diamond on Monday night, deserves recognition as a genuine prospect in the U21s ranks.

A bright, bold midfielder, O’Hanlon’s defining quality is his outstanding range of passing, able to dictate play from deep with sumptuous long balls or instigate quick moves with one-touch passes in tighter areas.

Crucially, O’Hanlon looks to be developing his tactical game, too, with the former St Kevin’s Boys youth showcasing a fine appreciation of space and how to find it in the middle of the park, with some impressive close ball control allowing him to navigate into comfortable positions.

Liverpool beat both Chelsea and Real Madrid to sign O’Hanlon in 2011, so the academy heads are well aware of his talent, but it may not be long before he receives acknowledgement among Rossiter, Brannagan and Chirivella.

Madger Gomes Could Be the Next U21s Star

Sheyi Ojo looks primed to follow suit in 2016, while Brannagan, Chirivella, Wilson and Sergi Canos can all look to fight their way into Klopp’s thinking in the long term.

But, as the academy ranks are focussed on finding the next star, one may just have appeared in Monday night’s second-half substitute Madger.

After scoring a vital winner in the U21s’ 4-3 win over Sunderland a week earlier, Madger was introduced late on against United as Liverpool looked to secure a result—the young Spaniard took up the No. 10 role behind Sinclair and Wilson, and promptly scored the Reds’ second.

Madger is 18, and is a determined, fleet-footed forward capable of playing in a number of positions.

If he goes on to secure a regular role in Beale’s side this season, it may not be long before he follows Sterling, Flanagan, Ibe and Rossiter onto the first-team scene.

“We decide when it’s over,” Klopp said at the beginning of November, after watching many supporters leave Anfield following Scott Dann’s winner in the 2-1 defeat to Crystal Palace.

“Between 82 and 94 you can make eight goals if you want, you only have to work for it.”

Klopp’s words were not meant as a criticism of the Liverpool support, but more a rallying cry for his disheartened troops.

The German’s remit since arriving two months ago has been to restore belief on Merseyside, starting with his squad, and he wants his side to battle to the end for a result.

At Leigh Sports Village on Monday night, Beale’s U21s did just that, working their way back to 2-2 despite looking out of the contest following Powell’s strike, with Chirivella, Brannagan, Wilson and Sinclair all upping their performance levels, no doubt buoyed by the vibrant Madger.

Though United secured the spoils late on, it must be noted that this was a Red Devils side that featured not only Fellaini but Argentina’s last World Cup goalkeeper, Sergio Romero.

Against a much more experienced side, Liverpool showed their fighting spirit—and Klopp should be impressed.