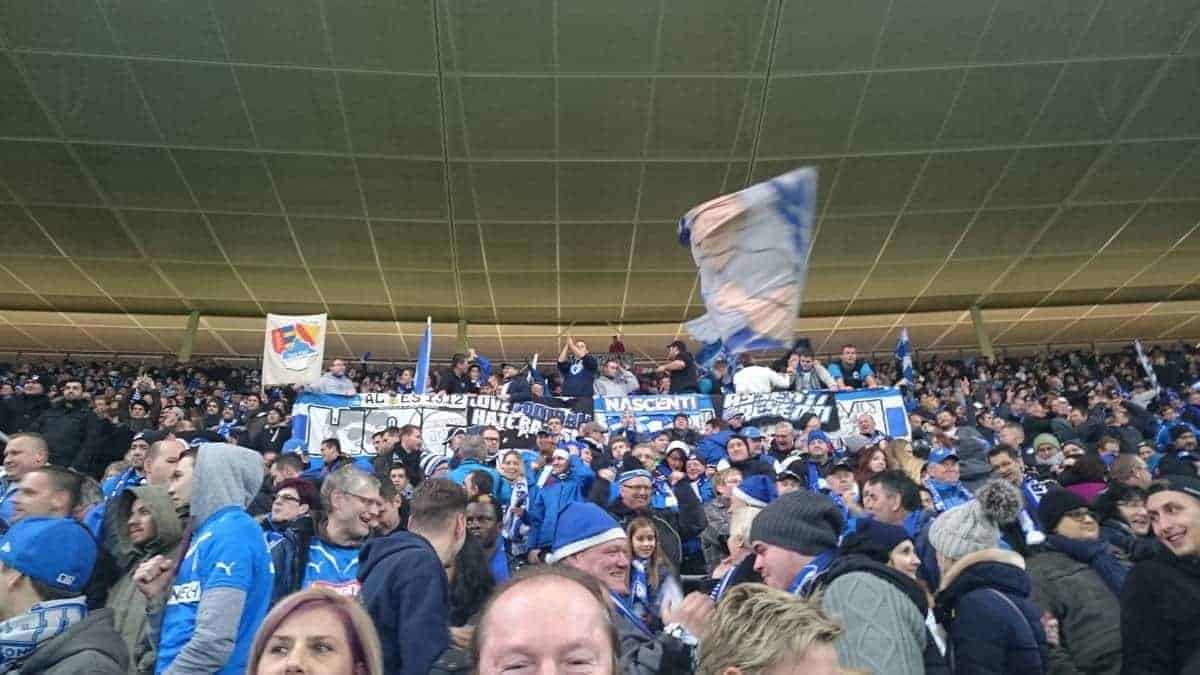 Chris Williams went to watch two games in Germany last weekend, finding the whole experience a world away from what the matchgoing fan is served up in England.

I’ve seen the future and it’s German – I’m not talking about LFC or Jurgen Klopp I’m talking about football; not just the game on the pitch the atmosphere in the stands and the way your average German fan is treated.

It’s amazing but it’s also depressing in equal terms – it’s what every football fan wants and needs but it’s also the polar opposite of the Premier League and that genuinely (and I don’t use this lightly) saddened me as much as it blew my mind.

Maybe I should just start with how I ended up there.

Last summer I was on holiday in Ibiza; I watched the World Cup Final in an Iberian bar, it was full of locals all screaming at the TV every time Messi touched the ball. As a quiet observer at the back I watched a determined German side win the ultimate prize in world football; that, plus the devastation of Brazil, made me decide that in 2015/16 I was going to the Bundesliga.

It just so happened that when Klopp took over he described the passion he’d witnessed at FSV Mainz 05; cheers Jurgen there was my first club to go and see. You’re probably wondering why I didn’t chose Dortmund or Bayern Munich; well I wanted to, but their tickets are so hard to obtain it’s untrue, I could have paid over £200 for a ticket on StubHub, or another legal touting site, but ultimately its 22 fellas kicking a pig’s bladder about on some grass and 2 ton for a ticket is a bit moody.

Fast forward to the December 2015 and I’m driving down to Heathrow for the night to take the early Friday flight to Frankfurt. First up would be FC Mainz 05 v VFB Stuttgart that night, then TSG 1899 Hoffenheim v Hannover 96 on Saturday before flying home Sunday.

So then; football ‘die Bundesliga’ way. What is it? Is it hyped? Is it actually any better than the self-proclaimed ‘best league in the world’ the Premier League? In short, yes!

Hoffenhiem came in even cheaper at €12 (£8.73) and €9 (£6.54). Imagine a kid getting into a Premier League ground for a top flight game for less than £7! If that isn’t good enough your match ticket gets you free local rail and bus travel. So now not only am I getting to go to a Bundesliga game for £8 I can get a train or bus to and from the stadium for free. That is unbelievable.

Once you’re inside though it gets even better; the vast majority of stadia are less than 10 years old so they have good facilities; toilets, snack and drink bars, fan shops. So a scarf cost me €19 but the pint of German pilsner I bought and then took onto the terrace cost me €3, contrast that with £3 for a crappy plastic half bottle of Carlsberg I need to drink before I go back to my seat at Anfield.

Half-time queues for food and drink? Nil; there is no cash taken in the ground. All supporters have a ‘FanKarte’ which you preload with money via any of the 20 stewards issued with a machine per block, this then gets scanned at the till so no waiting for change, you just get your stuff and go, you could say the service is very German, clinical in every way. Oh yeah and if you’re visiting like I was, take your FanKarte to the ticket office on the way out and you get your €2 deposit back.

So far then we’ve got cheap entry, cheap food and drink and a payment system that lets fans get back to the terrace as quickly as possible. So then what else is there? How about a free programme for every home game? Yep there’s that as well, stacked on the wall just help yourself on the way in or out.

Now here comes the contentious bit for stadia in England; my lad and I took our place on the terraces behind the goal. Traditional step and bar terrace at Mainz and rail seating at Hoffenhiem. It’s a long way from the old Kop where you couldn’t move at times, the Bundesliga model is exceptionally safe. The maximum attendance isn’t like sardines in a can it’s a comfortable area where women, men and children (from what I saw, 2 and 3 years old upwards) standing at a football match, safely and really enjoying themselves.

The atmosphere is undeniably electric, caused mainly by the average age on the terrace around the 20 to 25 mark. You could see that lads stand in the same area each week. They meet their mates at the same place, drink beer together and sing LOUDLY for 90 minutes. Maybe it is just the German culture but they didn’t get shirty, get lippy or arsey they just had fun watching their team play the game they love to watch and by Christ did they push their teams on.

It took me back to football atmospheres as I remember, my lad was in shock at the electric atmosphere, he couldn’t believe the noise at both stadiums. We just happened to coast in on two normal league matches but the terraces were decorated like an Anfield European night; flags, banners, scarfs it was an unbelievable sight. Almost as if the game on the pitch was secondary to the passion and culture on the sides and behind the goal.

That Yellow Wall you’ve seen at Dortmund, that exists at 17 other stadiums week in week out. The TSG v Hannover game was a relegation dogfight, 17th against 15th, it should have been a dire affair but it wasn’t. It was equal in the stands to any European night I’d seen in the last 15 years.

The German experience isn’t a myth, it isn’t over hyped; it is the future of OUR national game and the FA seriously need to look to the Bundesliga as the gold standard. Who would have ever thought that cheap tickets bring a younger passionate crowd? Who’d have ever thought that police and stewards that value and respect fans, on the whole, don’t see any trouble? Who’d have thought that a working class game in a working class atmosphere would provide such electric results on the safe stands?

Most relevantly though after what happened at Anfield last week, both managers took their players to the home terraces to say thank you for their support. After a 0-0 and a 1-0.

It’s engrained in their culture that the fans are part of the club. Don’t be a cynic just embrace it. If you can’t, maybe it’s time to hand your ticket on to the next generation of fans?

In short, Germany has it all; safe standing and alcohol on the terraces, coupled with a culture that can handle a drink. This equals the sort of atmosphere we crave in England; oh and when it’s all over you can jump on the bus and go into town for free.