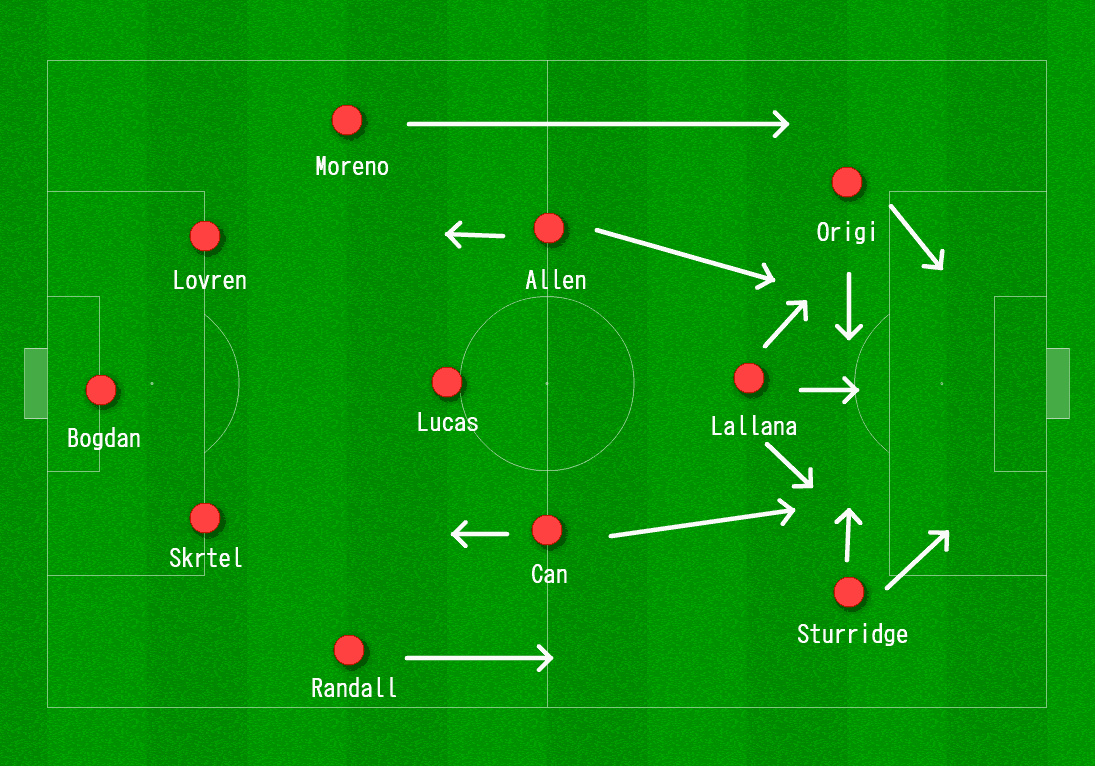 Jurgen Klopp fielded a new formation for Liverpool’s League Cup clash with Southampton, and reaped the benefits with a 6-1 win. “A new system,” Klopp explained to the Sky Sports studio after Wednesday night’s triumph at St. Mary’s Stadium, “the diamond with these two strikers.”

The German has made a habit of tailoring his system to suit the challenge ahead in his first two months as Liverpool manager, and he continue in this pragmatic vein on the south coast.

Though effectively a variant on his typical 4-3-3 system, the nuanced use of a midfield diamond helped Liverpool to an emphatic 6-1 win.

Buoyed by the return of Daniel Sturridge, Klopp built his attack around the England international, fielding him alongside Divock Origi in a fluid front line, with the pair interchanging with Adam Lallana at the tip of the Reds’ midfield.

The strong interplay between Sturridge, Origi and Lallana saw Liverpool craft several promising opportunities, but the support of Joe Allen and Emre Can proved the decisive influence.

Both midfielders, switching between the left and right flanks of Klopp’s diamond, laid on sumptuous passes for Sturridge to put Liverpool ahead at 2-1 before the half-hour mark, as well ably supporting full-backs Alberto Moreno and Connor Randall—who improved dramatically after a troubled start.

With Origi netting Liverpool’s third before the end of the first half, Klopp saw fit to withdraw Sturridge and introduce Jordon Ibe on 59 minutes.

Origi and Ibe both scored before Klopp brought on Brad Smith in place of Moreno and Jordan Henderson in place of Allen, with the diamond continually proving to be a devastating setup against a flailing Saints.

Ibe, who has matured since Klopp’s arrival at the beginning of October, impressed in a central role, while Origi’s movement and interplay was hugely effective.

Henderson continued his rehabilitation after recovering from a broken foot, pressing heavily in the final third and employing a smart, one-touch passing style to outsmart Southampton‘s sluggish back line.

Lallana, who started the game slowly, turned in a performance of the highest quality following the emergence of his attacking colleagues.

The £25 million man served in an intriguing role at the tip of Klopp’s diamond: a water carrier, rather than a creator.

It took time for Liverpool’s new system to go through the gears, but as Origi nodded home for his hat-trick on 85 minutes Klopp will have been encouraged by his side’s adaptability.

The Reds now head to downtrodden Newcastle United on Sunday afternoon, lifted by another sensational win.