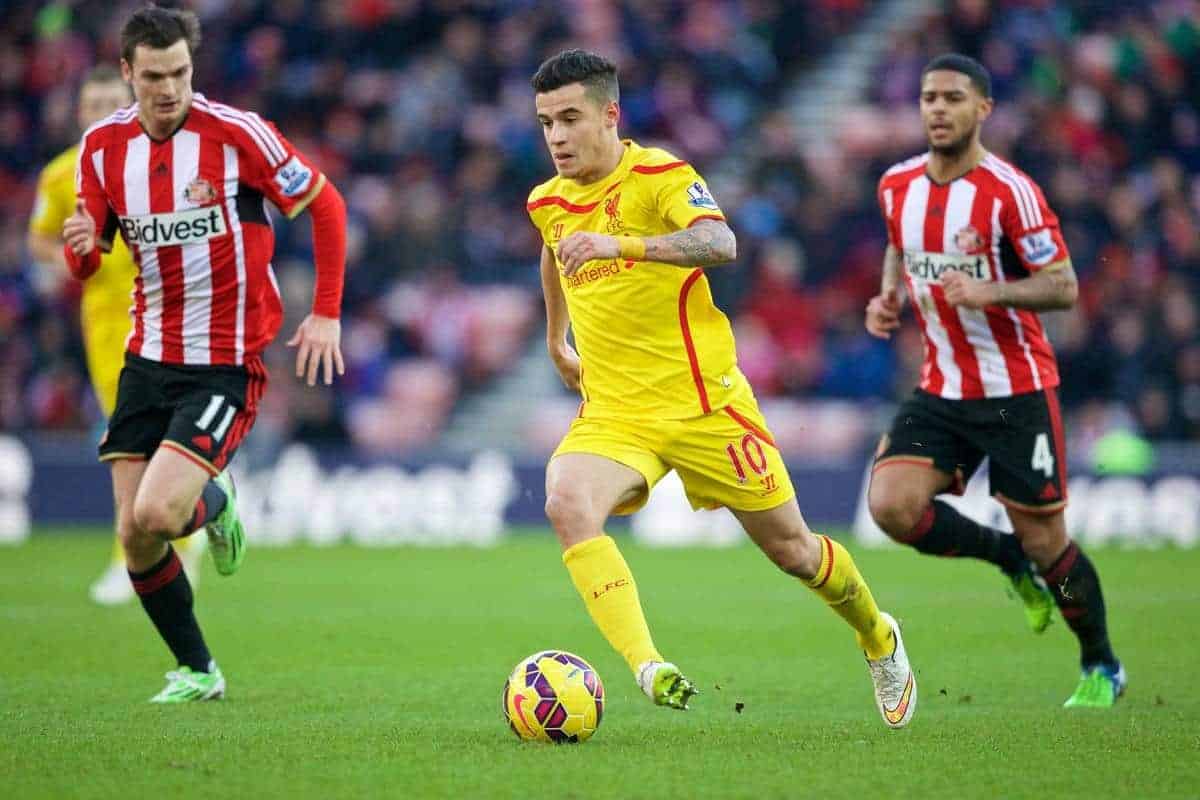 Jurgen Klopp’s Liverpool travel to Wearside to take on struggling Sunderland on Wednesday night as the Reds reach the half-way mark of the Premier League season. After ending the winless run against Leicester, Klopp’s Reds look to build on their Boxing Day success when they face Sam Allardyce’s relegation threatened side in the final fixture of 2015.

Having missed the opportunity to position themselves strongly for a real top four push with some sloppy results, Liverpool must continue to reverse the damage done over recent games with another dominant performance and three points in the north east.

The Reds must take real encouragement from faltering top four rivals, but Klopp’s men must stay concentrated on themselves first and foremost in order to avoid another costly slip up against a side scrapping for their Premier League survival.

The Reds play their 165th meeting between the two clubs and final away league fixture of the year at the same ground which they played their first of 2015.

Liverpool have had the upper hand of the Mackem’s in recent years – tasting defeat only once in the last 11 meetings – and also have a solid recent record at the Stadium of Light, losing once in their last five visits.

The Reds have recorded back-to-back victories on their last two trips, a 3-1 success in October 2013 courtesy of goals from Luis Suarez and Daniel Sturridge, and the last being a 1-0 win in early January.

Lazar Markovic’s finish after a strong run just eight minutes in proved enough to win the game, on a day that also saw the Serbian crash the crossbar with an outstanding scissor kick and the home side end with 10-men following Liam Bridcutt’s dismissal.

Klopp will be looking to make it a third consecutive win on Wearside on his first outing at the recently happy hunting ground. Sunderland have endured a dreadful season so far accumulating just 12 points from 18 games – a total that has left them fighting for their top-flight survival.

They come into Wednesday’s clash in woeful form and low on confidence after suffering four straight defeats – the last a 4-1 Boxing Day loss to Man City – and having lost six of their last eight matches.

Allardyce’s side have lost the second highest amount of games in the league and boast the leakiest defence in the division having shipped 37 goals in just 18 matches.

Liverpool ended a miserable run of form with victory over Leicester, handing the Reds a welcome first win in four league games.

The home side have scored only nine times at home all season but have also conceded the same amount, suggesting a tighter affair than thought awaits.

A successive win for Klopp’s side at the Stadium of Light is priced at 7/10, with a draw valued at 14/5 and Sunderland victory available at 4/1.

Allardyce has a number of injury concerns for the visit of Klopp’s side.

Defenders Adam Matthews and Younes Kaboul, and midfielder Sebastian Larsson are missing, while the Mackem’s boss is sweating on the fitness of John O’Shea who is touch-and-go due to a calf injury sustained on Boxing Day.

Allardyce could make changes to his side in attempt to spark an upturn, and that could include reinstating Lee Cattermole to the midfield set-up.

Costel Pantilimon, Ola Toivonen, Duncan Watmore and Jermain Defoe are pushing for starts after all started on the bench at the Etihad.

Sebastian Coates and Fabio Borini – who has scored twice in his last two outings and made no secret of his desire to notch against Klopp’s side – are both in line to feature against the Reds for the first time since leaving Anfield.

Applying relentless pressure and attacking a poor defence at every opportunity could see the Reds enjoy a good evening, and Klopp’s men will have to ensure they deal much better with the physical approach to come from Allardyce’s men.

Ahead of Liverpool’s visit, Allardyce said:

“From our point of view, Liverpool can be beaten – Newcastle showed us that – if you get the game plan right and you can frustrate them.

“Tony [Pulis] nearly beat them at Liverpool, denied just by a last minute equaliser, so they have some weaknesses that can be exposed.”

Klopp said prior to the north east trip:

“We want to improve our situation, we want to develop, we want to get more points in this important moment in the league.

“We have to be prepared again. There’s no doubt about individual quality and character, what we have to create is a stable performance.

“The next station is Sunderland. We have to go there and be concentrated from the first second.”

The game will be shown live on Sky Sports One in the UK with kick off in the north east coming at 7:45pm, while it can also be found on beIN Sport, Fox Sports, NBCSN, SuperSport and Canal+ around the globe.