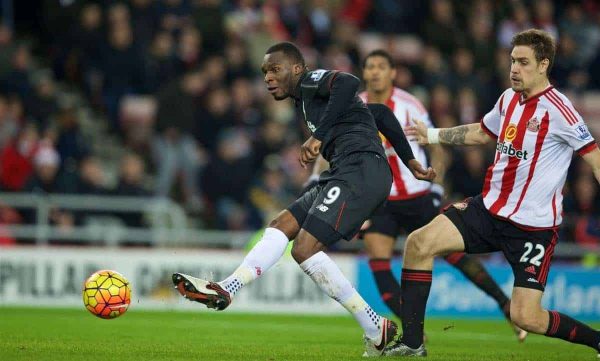 Sunderland 0-1 Liverpool: Benteke makes the difference to round off 2015

Christian Benteke sealed another valuable 1-0 victory for Liverpool on Wednesday night, as Jurgen Klopp‘s side edged out Sunderland.

After varying results against two of the Premier League‘s surprise packages in Watford and Leicester City, Jurgen Klopp steeled his side for a tough clash with a different proposition in Sunderland.

Despite a slight improvement under Sam Allardyce, Sunderland remain favourites for relegation this season, and Klopp knew he would be in for a fight at the Stadium of Light.

Making just one change to his starting lineup from Boxing Day’s 1-0 win at home to Leicester, Klopp brought in Christian Benteke in place of the injured Divock Origi.

With a trip to take on West Ham United to come on January 2, a 1-0 against the Black Cats will give him heart.

Operating in a 4-2-3-1 formation, Liverpool looked to dominatw from kickoff, and both Benteke and Nathaniel Clyne went close in the opening stages, with the right-back’s audacious 40-yard strike stinging the palms of Vito Mannone.

Sunderland‘s strong three-man midfield gave Liverpool little time to build, however, and Jermain Defoe had a great chance to put the home side 1-0 up on 15 minutes, but his long-range effort was pushed over by Simon Mignolet.

Perhaps owing to the strong Wearside winds, much of the chances from the opening stages came from outside the penalty area.

Continuing the trend, Philippe Coutinho span a free-kick just over Mannone’s bar on 17 minutes, before Roberto Firmino struck the post after a smart turn on the edge of the ‘D’.

Allardyce was forced into a change on the half-hour mark, bringing on young forward Duncan Watmore after Jack Rodwell went down with an injury.

Firmino had another chance to put Liverpool ahead, but Mannone was there to stop him once again, as his bullet header was pushed away from goal.

That proved to be the last good chance of the half, as Kevin Friend brought to an end 45 minutes of hopeful shots and poor touches.

It took Liverpool mere seconds to find a goal after the interval, however, as Benteke benefited from a kind rebound to slot home beyond Mannone.

The Fields of Anfield Road echoed around the Stadium of Light, as the Belgian gave supporters something to savour.

That goal gave Liverpool the impetus to push on, but it was Borini who crafted the next chance, wriggling between a handful of black shirts before firing an attempt into Mignolet’s grasp.

Mirroring Rodwell’s disappointing withdrawal, Jordan Henderson was forced off on the hour mark, with Lucas Leiva taking the captain’s place—as well as his armband—as Henderson struggled off with a recurring foot injury.

Seemingly growing in confidence following his goal, Benteke began to contribute intelligently in buildup play in the final third, combining with Coutinho to trouble Mannone.

Ironically, it was the Brazilian who then took a turn for the one-dimensional, sending a worrying number of long-range efforts high and wide of Mannone’s goal, hampering Liverpool’s attacking play.

A frantic Klopp clearly noticed this, replacing Coutinho with Jordon Ibe as the clock ran down.

Bar a horrific challenge from Jeremain Lens on Mamadou Sakho and a squandered chance from Ibe, Benteke was there to give the closing stages its most memorable moment, almost mirroring a wasted opportunity from the win over Leicester, side-footing into Manonne when through one on one.

Though Klopp will be incredulous at his side’s lack of work ethic late on, he will no doubt be pleased as the Reds secured another priceless victory.