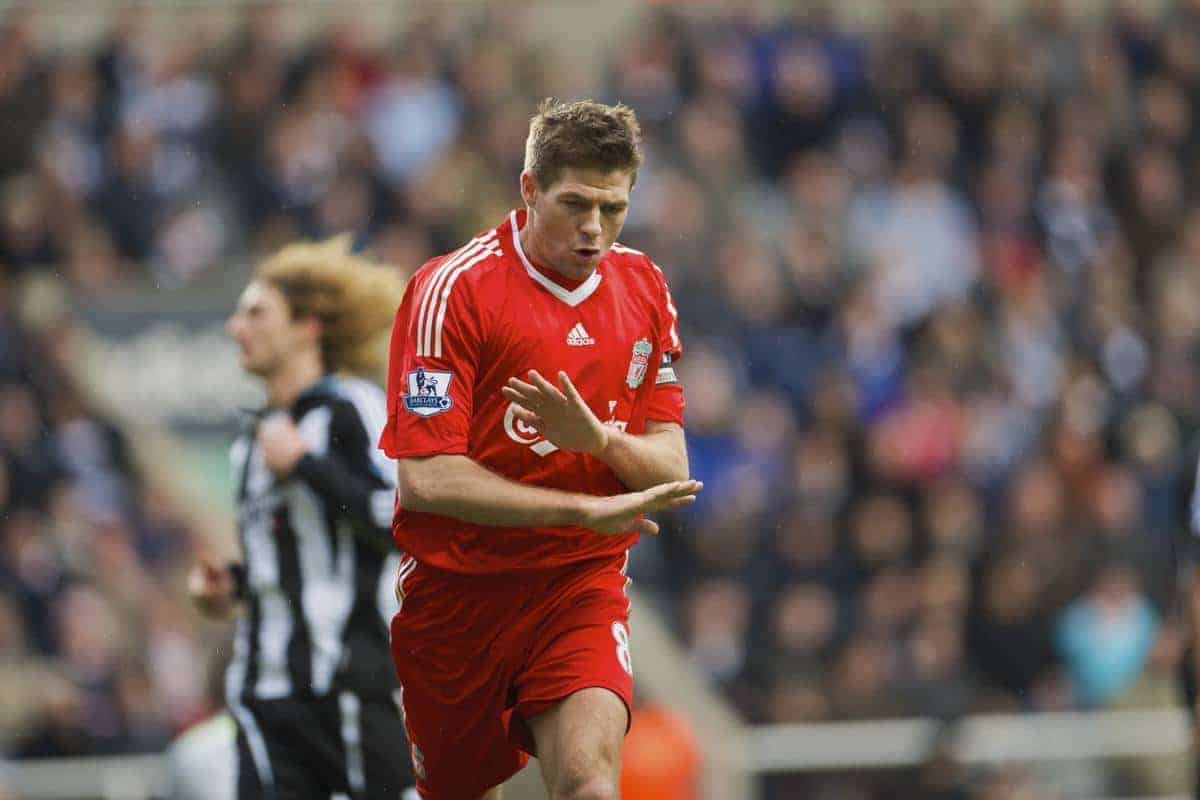 It’s almost seven years since Liverpool destroyed Newcastle at St James’ Park to move to top of the Premier League table. Only one of the starting XI that day remain at the club.

It was the moment we realised Liverpool had a real chance of winning the 2008/09 Premier League title.

Rafa Benitez’s side produced a masterful display against Joe Kinnear’s Magpies, winning 5-1 in front of a stunned home crowd. In truth, it could genuinely have been eight or nine.

Steven Gerrard, at the peak of his powers at this point in his career, fired the visitors in front, before Sami Hyypia added a second.

A Newcastle goal before the break did little to stem the flow of Reds attacks in the second-half, with Gerrard, Ryan Babel and a Xabi Alonso penalty completing the rout.

This was the Reds’ most complete team of the Premier League era, and one that probably underachieved in not pipping Man United to the title that year.

Liverpool visit St James’ Park on Sunday hoping for much of the same as that day back in December 2008, but what is that starting XI up to in 2015?

Pepe Reina remains the Reds’ standout goalkeeper of the last 25 years, with the Spaniard enjoying nine great years on Merseyside.

Having fallen out of favour under Brendan Rodgers, the Spaniard joined Napoli on loan in 2013/14, before making a surprise transfer to Bayern Munich a year later.

Things didn’t work out for Reina in Germany, however, with the incomparable Manuel Neuer first-choice at Bayern, and he re-joined Napoli, this time permanently, in June.

Jamie Carragher was another who was in his prime back in December 2008, and he went to make a staggering 737 Liverpool appearances.

He is rightly regarded as one of the finest centre-backs in Reds history, despite playing at right-back on that day seven years ago.

Since retirement, ‘Carra’ has become one of the most respected Sky Sports pundits around, and his Monday Night Football analysis with Gary Neville was always a must-watch, prior to Neville becoming Valencia manager.

How Jurgen Klopp could do with him at the back now.

Another monster of a centre-back, Hyypia was a completely different to Carragher in style, but every bit as good.

2008/09 proved to be his last in a Liverpool shirt – he was often not first-choice by that point in his career – and his emotional final game at Anfield will live long in the memory.

Hyypia finished his playing career at Bundesliga side Bayer Leverkusen, and he went on to manage them between 2012 and 2014.

Following a failed spell at Brighton boss last year, he is now in charge of Swiss outfit FC Zurich.

Daniel Agger will forever be seen as a player who never quite reached his potential at Anfield.

The Dane was a hugely gifted centre-back, especially on the ball, but injuries curtailed his progress time and time again.

He left Liverpool in the summer of 2014, and despite still being just 29 years of age, those aforementioned injury problems had really caught up with him. Big things were expected of Emiliano Insua as a youngster – he was just 19 when Newcastle were dismantled 5-1 – but his career never really took off.

The left-back made 62 appearances for Liverpool in total, scoring once, before joining Galatasaray on a one-year loan in 2010.

A year later he moved to Sporting Lisbon, before making a fairly surprising move to high-flying Atletico Madrid in 2013.

A loan season at Rayo Vallecano in 2014/15 was followed by a move to Stuttgart earlier this year, where he remains to this day. One of the most popular Liverpool players of recent times, Javier Mascherano has been a world-class footballer ever since moving to Anfield in early 2007.

The brilliant Argentinian spent two and a half years with the Reds, before Barcelona came calling in the summer of 2010.

Mascherano’s game has gone up a further notch during his time in Spain – centre-back has often been his position, unlike at Liverpool – and he has been a key player in one of the finest club sides of all time.

Now 31, he is still just about in his prime.

Back in December 2008, Lucas Leiva was the most unpopular player at Liverpool. He could do no right in the eyes of many, and it seemed hard to envisage him having a future with the Reds.

The 28-year-old has made enormous strides since those dark early days at the club, however, and he is now one of the first names on the team-sheet under Klopp.

Lucas has become an increasingly popular figure with the supporters over time, with his quality on the pitch and likeable personality off it a big reason for that.

He is a completely different player to the one that was often shamefully booed seven years ago.

What can be said about Gerrard that’s not already been said?

The legendary former captain is widely regarded as Liverpool’s greatest ever player, along with Kenny Dalglish, and he reached unrivalled heights during his 17 years with the Reds.

His career at Anfield may have ended on a rather sour note, with the slip against Chelsea and a poor final season at the club, but 186 goals in 710 appearances from midfield outlines his brilliance.

Gerrard’s career is in its final stages now, with the 35-year-old currently playing for MLS side LA Galaxy.

Yossi Benayoun was probably Liverpool’s most underrated player during 2008/09, with the Israeli playing a big role in a memorable season.

The classy attacking midfielder/forward spent three good years on Merseyside between 2007 and 2010, before moving to Chelsea and enjoying loan spells at Arsenal and former club West Ham.

After playing for Queens Park Rangers in 2013/14, Benayoun moved back to his homeland to join Maccabi Haifa last year – where he’s still played aged 35.

Babel is certainly an example of someone who has never reached his potential. That ‘next Thierry Henry’ tag feels a long time ago now.

The Dutchman was an exciting signing when he moved to Liverpool from Ajax in 2007, but he always flattered to deceive.

The Reds finally ran out of patience with him in 2011, and he was sold to German club Hoffenheim, where he spent just one season. There hasn’t been a more committed, likeable Liverpool player than Dirk Kuyt for many years, and he became a real cult hero at Anfield.

He scored 71 goals in 285 appearances between 2006 and 2012, which from an often right-sided role is an excellent return, before moving to Fenerbahce.

Kuyt signed a one-year deal with former club Feyenoord in April this year, and some devastating form has seen him score 13 times in just 16 appearances this season.

> Premier League’s big-hitters should all taste victory this weekend

> Joe Allen makes his case to replace suspended Emre Can vs. Newcastle