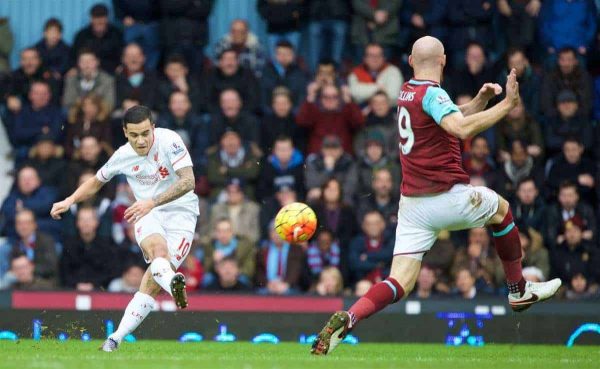 When backs are against the wall a team needs its best players to stand up and be counted. Something that doesn’t happen in this current Liverpool squad.

There are several players at Liverpool who are paid to do just this and in the case of Philippe Coutinho, who is one such player, his contract signed at the start of 2015 was a reward for some excellent performances.

There are others who should also contribute more, but plenty has been said about poor attacking performances from the likes of Roberto Firmino and Christian Benteke; the latter’s flaws being even more glaring when he fails to score, as was the case against West Ham on Saturday.

But Coutinho – undoubtedly one of Liverpool’s best players – is a player who needs to start reminding us of what he can do with those magical Brazilian feet other than cut inside from the left and shoot right-footed over the bar.

The obligatory end of year highlight reel contained several Coutinho moments, including his crossbar rattler against Southampton in February, and a screamer against Manchester City the month later, but his attempts to replicate these since can waste some good attacking positions for his side.

His last goal, and arguably last good performance, came against Manchester City; a game in which his compatriot Firmino was leading the line, and when Jurgen Klopp’s men were firing on all cylinders.

After this he missed a few games with a thigh injury, and hasn’t performed since returning.

The striking problem ahead of him doesn’t help things. He longs for the return of Daniel Sturridge as much as anyone, and is often forced to shoot because there is simply nothing else on.

The Reds’ No.10 is a player who like runners ahead of him, and at Upton Park there was the odd glimpse of this when he played in Moreno on the left and looked for similar passes to the Spaniards replacement Brad Smith.

You’d expect the most attacking playmaker to be finding the striker more often than not, but his favoured outlet was the aforementioned Moreno down the left, or Emre Can inside or behind him. He passed to these players seven times each, with his next favourite – and often very predictable – option being to shoot.

He let off a total of six shots, which was more than any other player on the pitch, and of these shots five were blocked and the other one ballooned over the bar. It’s been a familiar story in recent weeks.

Against West Ham the 23-year-old completed 71% of his passes and did manage to create two chances for his team-mates, including the cross for Joe Allen’s header in the final minutes from which the Welshman should have scored.

One of his passes out to Moreno should also have led to a goal, but Benteke failed to make contact with the ball once Moreno had played it back to him. These are the moments where Coutinho could do with a little help from his teammates.

The excuse that he needs a pacy intelligent runner ahead of him can only stretch so far (even though it is a valid reason for his troubles), and while his shooting technique has improved since his early days at the club, it’s safe to say that he tries one or two long shots too many.

If he continues to play with an apparently incompatible striker in the shape of Benteke, then the answer might lie in a positional change.

Moving Coutinho to the centre where he has the option to play in both full-backs rather than one, as well as looking for the forward runs of his fellow midfielders, would lead to more of the types of ball which he’s been playing out to Moreno.

It might also suit fellow Brazilian Firmino, who could find more space on the left than he does in the packed areas he’s currently working in. It’s a position the No.11 was used to playing at Hoffenheim, and it would also mean he could make runs down the left which would in turn provide another outlet for Coutinho.

When Firmino moved from the Bundesliga to England in the summer, it seemed like the ideal system would have himself and Coutinho swapping places between the left and central positions, but this hasn’t happened so far.

As much as Coutinho’s level of effectiveness has a lot to do with those around him, he also needs to take some responsibility of his own and not merely revert to wayward long shooting when there are no options available.

His link-up play with Emre Can has been encouraging, and maybe this partnership could help kickstart a resurgence as Klopp and the fans hope he can reach a level of consistency, and return to being one of the best players in the league.