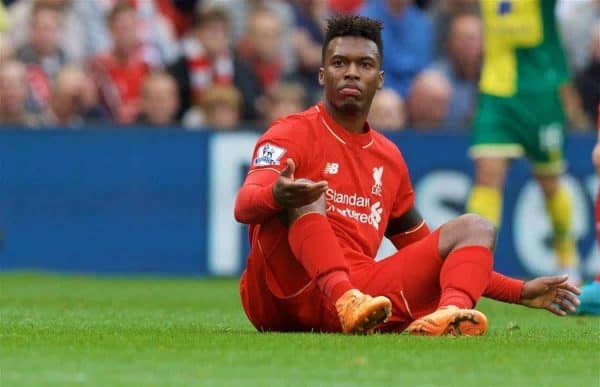 Dan Holmes on Daniel Sturridge, Liverpool’s top paid player and the man who gives the side a completely different dynamic up front – when he’s fit.

Never before has such a potent goal scorer had such uncertainty surrounding his future. In Daniel Sturridge, Liverpool undoubtedly possess one of the finest marksmen in the country. Here is a player who scored more Premier League goals in his first 50 games for the club than any other in Liverpool’s history. Think on that for a moment.

That’s more than Robbie Fowler, Michael Owen, Fernando Torres and Luis Suarez. Considered simply for what it is, that is truly remarkable.

Yet – and there really is a yet – he stands on the precipice of being Anfield’s forgotten man. His at times comedic injury record has disrupted his career to a degree almost unprecedented. The man just cannot put together a sustained period of fitness. His recurring injuries are now as predictable as his goals.

All manner of accusation has been levelled at the forward. Most notably, his manager Jurgen Klopp suggested that he needs to learn how to differentiate between different degrees of pain. This particular assertion holds merit and would probably be accepted by Sturridge himself. Klopp’s meaning being that players returning from long-term injuries will always pick-up minor knocks during their rehabilitation, and the forward need not consider such things recurrences of his previous complaints.

However, others have been less diplomatic. There is a groundswell of opinion that Sturridge just ‘doesn’t fancy it’, that he is a prima donna who only wants to play when it suits him. No tangible evidence exists to quantify such accusations, but they are made all the same.

When you consider them against another common criticism of Sturridge – that he is individualistic and concerned only with personal glory – they seem even more ludicrous. Why would a player who so clearly thrives on scoring goals (as though this is such a rarity) only choose to play so fleetingly?

Sturridge lives for scoring goals. All the goals. Left-footers, right-footers, volleys, headers and back-heels. There is nothing else in his mind. To suggest that a player with this particular mind-set would ‘duck’ games just doesn’t hold any weight. Neither do claims that his injury problems are ‘psychological’, though it would be interesting to know how agonising a ‘psychologically’ torn muscle is.

Former Liverpool captain Steven Gerrard’s revelation that he once had to convince Sturridge to play against Manchester United hardly softened anybody’s stance on the England frontman’s plight.

More reasoned voices quite correctly point to Sturridge’s lack of availability offsetting his value on the field. It’s hard to argue with this line of thinking. After all, nobody has ever arrowed one past a goalkeeper from a rehabilitation centre in Boston.

It is not outlandish to claim that a less gifted forward would have been cast aside far sooner, but can Liverpool – so outrageously profligate in front of goal– afford to offload such a guaranteed source of goals? Not until they find them from elsewhere they can’t, and they have not made even a semi-respectable job of that. Having said that, how many Premier League clubs could replace a striker with a record like Sturridge’s?

Sturridge’s ability to score goals immediately upon his return to the side – witness his gloriously clinical pair of braces against Aston Villa and Southampton – is another way in which he has kept himself relevant. He doesn’t need to play himself back into form, which is astounding when you consider the length of his lay-offs. It is a priceless asset to have for someone who has been playing so little.

After the aforementioned game against Southampton in the quarter-final of the League Cup, Klopp revealed that he now understood what everybody was talking about when they spoke of Sturridge’s ability. His two goals on the night not only turned the game in Liverpool’s favour, having been a goal down, they also served the footballing public with a timely reminder of how few chances he actually needs to find the net.

The first was classic Sturridge, as he squared up Steven Caulker, shifted the ball onto his left foot and rifled it home with pinpoint accuracy beyond Maarten Stekelenburg. The second owed more to the ice running through his veins. Popping up behind the Southampton backline to sweep the ball beneath Stekelenburg on the half-volley. The sublimely weighted pass Emre Can was able to send his way would not have been on had Sturridge not been playing. His pace and anticipation give his team-mates that option.

Liverpool look a different proposition with him in the side. Phillippe Coutinho, he of the mercurial passing range, is the most obvious beneficiary of Sturridge’s expert runs across the front line and it would be fascinating to see Sturridge spearheading an attack just advanced of the interchangeable trio of Lallana, Firmino and Coutinho.

No more aimless pot-shots from Coutinho, standing still in possession from Firmino or pointless pirouetting from Lallana. These wasteful traits can surely be put down to the lack of movement the three have in front of them. Upon receiving possession, usually in a relatively deep position, any one of the three have too often been the most advanced attacker in the side, something ill-suited to any of their skill-sets.

A fully fit Sturridge is capable of breaking records, and, considering his side have been breaking all the wrong kinds recently, particularly in respect of goals scored, they just cannot afford to cast aside such an expert provider of football’s most valuable commodity.

Once he has negotiated his way through his mid-season pre-season, Sturridge will return and categorically will score goals. He always does. Could the same be said of any other player in the Liverpool squad? If it could, there might not be such a need for persisting with Sturridge, but it can’t. For that reason alone, Klopp must persist with this most prolific of problems.