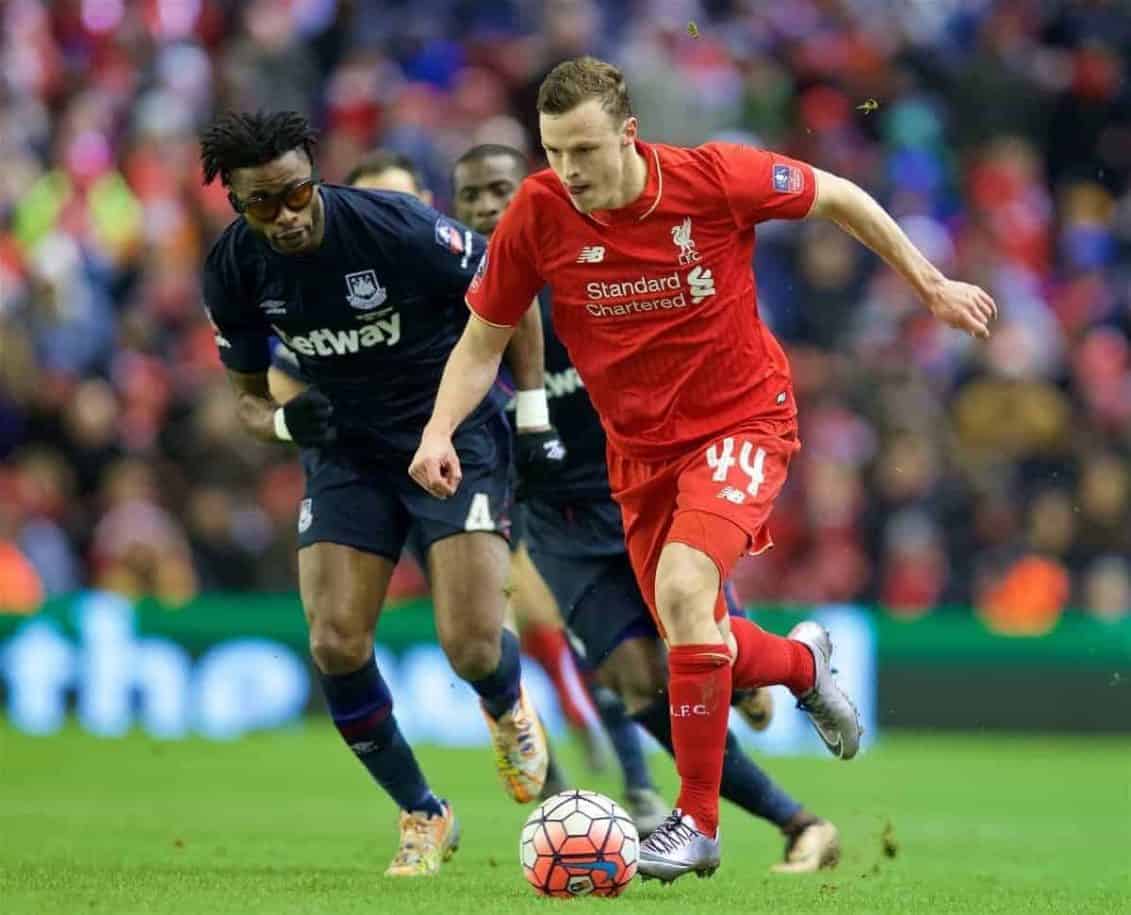 A much-changed Liverpool failed to beat West Ham United in this FA Cup fourth round tie, which will now go to a replay, and here we rate the Reds’ output.

Shouts at his defenders regularly, and now looks like he wants to come for crosses, even if he doesn’t always get them.

Passed the ball out of play instead of making the easy pass to Steven Caulker, and didn’t really have any saves to make.

Still too slow when it comes to decision making when the ball is in his hands, or at his feet.

More of the same from Clyne as he got up and down the right throughout the game, contributing on and off the ball.

Had the unenviable task of marking Dimitri Payet, and kept the Frenchman reasonably quiet.

Set Joe Allen up for a good chance early in the second half, and played another dangerous ball into the box shortly after.

Defended well towards the end when West Ham tried to attack down his side. Looks like a useful addition to the squad, but lucky not to have been penalised for handball when a cross came into the box from a West Ham free-kick; his motion to the ball as it came down looked deliberate and it could easily have been given.

Picked his battles well in defence, and looks as settled as any of Liverpool’s right-sided centre-backs do, despite his lack of time with the side.

Made an important block from Michail Antonio late in the game.

Still looks like he has a mistake in him when he tries to win things he shouldn’t be going for, as demonstrated by the yellow card he picked up in the second half.

Despite the booking he was still confident enough to put in a full-blooded tackle on Victor Moses shortly after, which he timed perfectly.

Rapid down the left, and can whip a cross in, but can be sloppy in defence and occasionally put his team-mates under unnecessary pressure when in possession.

Got caught under a few high balls, mistiming jumps when attempting to win headers, but despite being his least convincing performance in his few appearances so far, it still wasn’t bad.

Stationed in front of the back four, he was heavily involved throughout the game as he broke up opposition attacks and contributed well when his side had the ball.

Covered for the full-backs when needed, and also stepped in for the centre-backs if one of them went forward.

Had the odd wayward shot, but this shouldn’t detract from a good performance in the areas of the game which are more relevant to his position.

Performed well in a midfield three and was arguably the best of the bunch. He was good on the ball and showed great composure under pressure.

The 19-year-old was given the responsibility at set-pieces and did better than most in a red shirt have this season, though he did fire a free-kick straight at the wall in the first half.

Saw a powerful left-footed effort from outside the area turned past the post by Hammers keeper Darren Randolph in the first half, and played an inviting through-ball to Christian Benteke at the start of the second.

Looks very comfortable at this level despite his age and relative inexperience, and was the team’s best passer with 92 percent accuracy.

Captain for the day, speaking regularly to his team-mates during breaks in play and giving encouragement rather than shouting the odds.

Involved in some good link-up play between defence, midfield and attack, and was the glue in a fairly impressive midfield trio.

His attempt at an overhead kick – which he only missed because he was pushed – was a highlight of the game.

Almost anonymous in the first half, and when he did manage to carry the ball forward he lost it before he could do anything productive.

Improved slightly in the second period but still ran into trouble at times. Managed to play a good ball which put Benteke in on goal before being substituted.

Found himself in some good positions and showed some neat touches. Played a through-ball for Benteke which the striker was inches away from reaching.

Needed to be stronger on the ball and more aware of where the defenders were early on, but he improved greatly in this regard as the game went on.

Had Liverpool’s best efforts on goal when he forced a save from Randolph just past the hour mark, and had a similar left-footed effort saved shortly after.

Occasionally holds the ball up but too often he fails to find a team-mate once he has it.

He was just a few yards from goal when the ball landed at his feet following a deflected shot from Stewart, but he cleared the ball away from danger rather than turning it towards the goal.

Was put through by Ibe as the game approached the last 15 minutes, but he saw his shot saved by Randolph.

Sheyi Ojo (on for Jordon Ibe 80′) – N/A – Started a good attack shortly after coming on, and fitted in well down the right.

Jerome Sinclair (on for Cameron Brannagan 86′) – N/A – Looked like the quick striker Liverpool need at this moment, but he wasn’t on the pitch long enough to see if he has the quality to go with it.

Jose Enrique (on for Joao Teixeira 90′) – N/A – His first and possibly only action was take to take the worst free-kick you’ll see this season, which takes some doing by Liverpool’s standards.

The manager’s decisions are somewhat forced onto him by the run of games and amount of fit players, but the team he put out still managed to produce some chances in attack, while an untested back four kept a clean sheet—this has to go down as a positive for Klopp the coaching staff.

His midfield three of Allen, Brannagan and Stewart were impressive, but the team struggled for a cutting edge in attack, with only Teixeira looking likely to score of the three attackers.

Ojo and Sinclair could perhaps have been brought on earlier to try to prevent the tie from going to a replay.