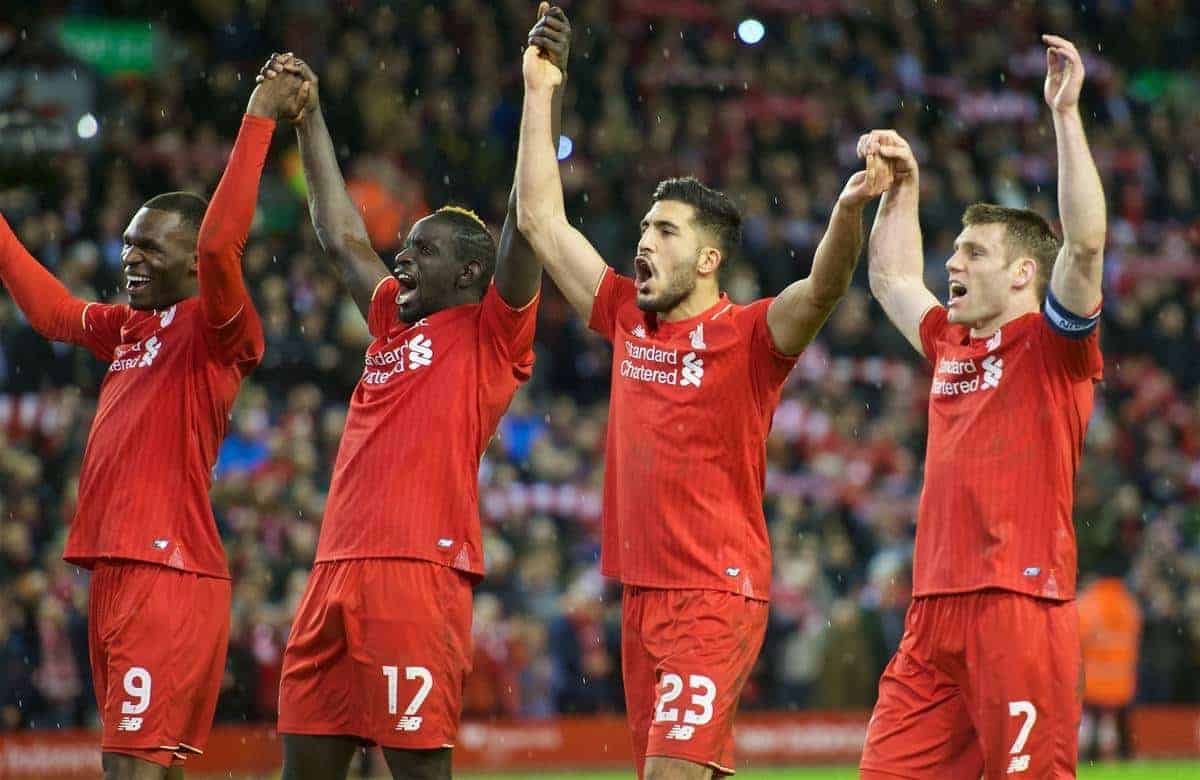 After Liverpool booked their place at Wembley with a penalty shoot-out win over Stoke City, we assess the performances of each Red on the night.

The Belgian was ridiculously beaten by the first shot on his goal once again, but displayed good handling and decisiveness with some high balls lobbed in his box from the visitors.

Deserves huge credit for two vital saves in the shootout from Peter Crouch and Marc Muniesa, setting the Reds on their way to victory.

Making his first Reds start since May 2014, the Scouser did a commendable job on what was a difficult return in a high intensity affair.

Put some crunching tackles in first half though could have done better in tracking or handing Mark Arnautovic over to Kolo Toure for Stoke’s goal.

Overall Flanagan did an adequate job in his first appearance for 20 months, which earns him an extra 0.5.

Another solid if unspectacular performance in the 85 minutes played by the experienced Ivorian at the heart of the backline.

Had little to do but competed well and cleared his lines decisively, though could have done better tracking Arnautovic for the Stoke goal—even though the linesman should still do his job and flag for offside.

The Frenchman is still searching for his best form, but turned in a solid overall display in an erratic Reds defence.

Made one error in allowing the ball to bounce in the box, and could have done more to cut out Bojan’s pass across for Stoke’s goal, but was strong in the air, good in possession and made some absolutely vital blocks.

Should have done better with his Kop end header.

The Spaniard is under pressure for his recent poor displays, and he did little to ease the mounting concern with another erratic performance.

Over aggressive at times, especially with Jonathan Walters, and switched off badly first half allowing the Evertonian in for a one-on-one which he thankfully spurned.

Rightly screamed at by Klopp for engaging in needless off-ball antics.

Not a great night for the Brazilian, who struggled with the pace of the game and with his distribution in holding midfield throughout.

Filled in at centre-back alongside Sakho but could have been replaced with him offering very little and being bypassed easily. Did net an excellent penalty though.

Far from the best performance Can will enjoy in a Reds shirt, with the German turning in a flat display on the big occasion.

Fired one rasping shot on goal, but gave the ball away countless times and looked at odds with the pace of the game, though battled hard for 120 minutes on tired legs.

Missing his spot-kick summed up his night.

A difficult and flat night for the captain, who lacked his usual energy and influence again, and struggled with his passing in the 55 minutes on the field.

Clearly still being hampered by the heel injury which really does need sorting and it is becoming a growing concern with its impact on the 25-year-old visible and severely restricting.

A typically selfless and hardworking performance from the vice-captain, who filled in at right-back when Flanagan departed.

Lacked quality in his attacking play though, scruffy with his passing and failing to link-up with Roberto Firmino and Adam Lallana, contributing to a blunt attack.

Milner deserves credit, however, for his desire in 120 minutes of action and for scoring his spot-kick.

Coming back into the starting XI, Lallana displayed good energy off the ball again, but produced nowhere near enough on it.

Busy in his work rate but didn’t provide Firmino with enough support and continues to frustrate with a real lack of killer instinct in his game—but did step up and tuck away his penalty.

The Brazilian had a difficult task up top with a real lack of support around him when leading the line and supporting Christian Benteke.

Worked tirelessly for little reward, still showed signs of his quality with some lovely touches and carried the Reds’ biggest creative threat on the night which was nullified by his own teammates.

The Belgian typically frustrated with a static performance after coming on, despite showing some nice control on occasions.

Did net an absolutely nerveless spot-kick that trickled into the net, so played his part in sending the Reds to Wembley.

The Welshman should have started at Anfield, and provided the calming and composed influence missing all night when he came on, displaying his typically tidy distribution to give the Reds some controlled possession and a foothold in the game.

Most importantly, made himself a hero firing the Reds to the final netting the winning penalty with a confident effort into the top corner, continuing his recent brilliant impacts which earns him an extra 0.5.

The teenager was off the pace when he entered, failing to track Erik Pieters’ run late on, as well as blazing wildly into the Kop on his left foot.

It was a mixed night from the Liverpool boss, who watched his side produce a woeful display but achieve the ultimate aim of securing a Wembley visit.

Made the sensible call to start Lallana, but should have freshened up his midfield after the poor Norwich City display—introducing Allen would have helped Liverpool’s lack of energy and composure in the middle of the park.

But the German has guided his side to ‘Anfield South’ just over three months after taking charge which, considering what he’s dealt with in that time, is an excellent achievement.

Now to pick up the trophy!