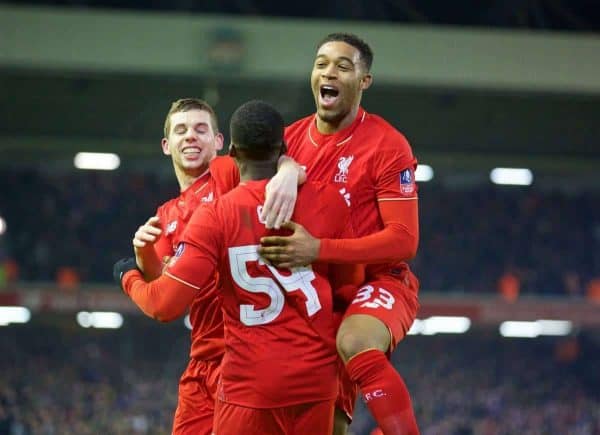 Liverpool cruised to a 3-0 win over Exeter City on Wednesday in their FA Cup third round replay. Here is how we rated each Reds player on a freezing night on Merseyside.

Mignolet was a virtual passenger all evening, and must’ve been close to freezing.

The Belgian really did have almost nothing to do, but did claim a second-half cross in a confident manner. That was about it, so he doesn’t merit a rating.

A solid but unspectacular showing from Randall, who looks limited in terms of his attacking thrust.

He had started the second-half quite strongly, in fairness, and looked a little disappointed to be substituted for Jon Flanagan shortly after half-time.

Like the whole of the Liverpool defence, Ilori was never really called into action throughout, but there was an air of confidence about him.

The Portuguese youngster is worth persevering with.

Enrique was bizarrely made captain on the night, and this could arguably be the last we ever see of him in a Reds shirt.

His passing was a little aimless at times, but even the much-maligned Spaniard failed to make a mess of things against a non-existent Exeter City side.

Another strong showing from the Australian, who looks a genuinely solid back-up to Alberto Moreno at left-back these days.

He set-up Joe Allen’s opener with a precise cross and was eye-catching both defensively and going forward.

The highly-rated midfielder once again looked a classy figure in the Liverpool midfield, using the ball well throughout.

A lot of what Brannagan does is understated and he looks a very mature footballer for his age. Could have a big future.

Allen was one of the most experienced players on the pitch and it showed.

The 25-year-old looked a class act in possession and scored the all-important opening goal with a simple finish. He’s staking a claim for playing more regularly, and has started adding more goals to his game.

Stewart understandably looked short of match practice in the original tie at Exeter, but here he showed his potential.

He looked silky in the middle of the park alongside Brannagan, and had a physical presence about him that was noticeable. Good positional sense in front of defence.

Ibe had a fairly quiet first-half and was at times frustrating, but he came alive after the break and tore the visitors to shreds.

The young Englishman was desperately unlucky not to score his first Anfield goal, with the ball cannoning off the underside of the bar, and was Liverpool’s best player.

Teixeira drifted in and out of the game a little at times, but like so many of Liverpool’s talented youngsters he was pleasing to watch.

The attacking midfielder scored his first ever Reds goal late in the day, finishing clinically in front of the Kop.

This was a great chance for Benteke to score a few goals and gain some much-needed confidence, but once again, he fluffed his lines.

The former Aston Villa man had numerous chances to score, but consistently missed the target, and comically blew a chance to find the net in the dying seconds. Just not good enough.

Looked better outside the penalty area than in it – where his movement, or lack of it, was alarming.

The popular full-back received a rapturous reception when he made his return from almost two years out injured and was typically reliable. Showed some good touches going forward and some good passing.

A lively presence from the bench, Ojo scored his maiden Liverpool goal with a supreme, curled effort.

A good night at the office for Klopp, whose side earned a comfortable win despite him making 10 changes to the side that lost to Man United on Sunday.

Bringing in the likes of Ibe and Allen made an obvious difference, having not used them at St James Park in the original tie, and key players will now be well rested for Saturday’s trip to Norwich City.