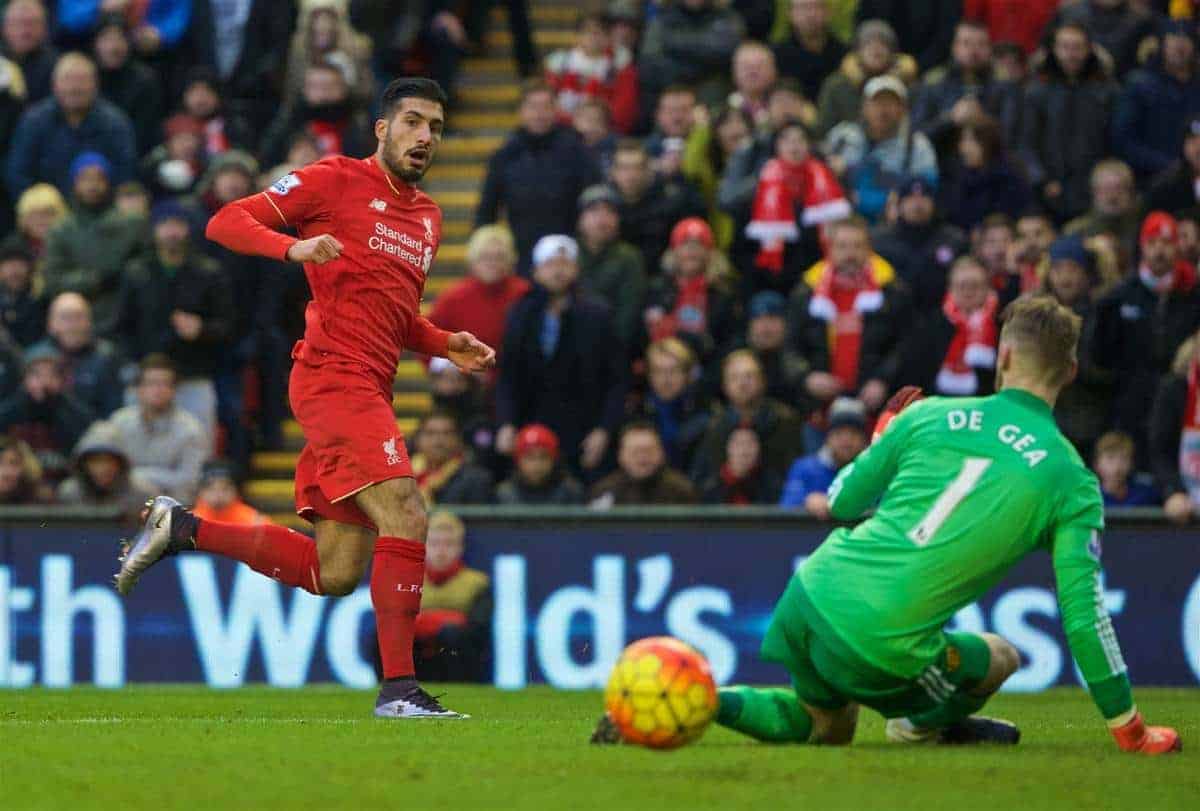 Fresh from the last-minute jubilation of Wednesday night’s 3-3 draw with Arsenal, Jurgen Klopp steeled his side to take on United at Anfield, in one of the biggest games of the Premier League season so far.

It was United who stole the spoils however, with a single Rooney strike—against the run of play—giving Louis van Gaal’s side the victory.

Big performance needed here from #LFC, which is to say, big first 3 minutes needed. so far has always set tone for next 87.

Hate today's game with a passion. That said, no victory feels sweeter if you can pull it off.

COME ON YOU REDS! #LFC

Though the tempo was relatively measured in the opening stages, Lucas Leiva received vociferous support for a bullish challenge on Marouane Fellaini.

Liverpool’s first opportunities came from a pair of great passes from their Brazilians, but both Adam Lallana and James Milner were unable to make the most of Lucas and Roberto Firmino‘s creativity.

That was boss from Lucas.

Sumptuous ball by Lucas, that

What a pass by Firmino there. Think Milner could've pulled back there and waited, but won't blame him for shooting.

Now imagine what Firmino would do when flanked by two top class players. He certainly picked the right week to find his true form ?

With 30 minutes on the clock, it was all Liverpool, with some impressive passing from a fluid midfield unit giving Klopp’s side the advantage.

But with Liverpool dominant, a plethora of chances fell to Jordan Henderson—who consistently proved to be the wrong man for the job in front of goal.

Not exactly Luis Garcia against Juve from Hendo there.

Jordan Henderson has had better games for Liverpool.#diplomacy

The half ended at 0-0, despite the Reds’ strong attacking play and United’s listlessness, with supporters rueing Liverpool’s lack of cutting edge.

A lot of bad decisions, slow decisions, they all seem tired, in mind more than legs

Would love a midfielder who knew how to score.

#LFC clearly the better side but an inability to take chances leaves this wide open. Has Utd 1 chance 1 goal written all over it..

With Liverpool unable to gain an advantage 30 minutes into the second half, questions turned towards the output of Klopp’s wingers.

Why is Milner diving in every single time?

Lallana steals a living. Ineffective in every respect. He should try talking less to the press and working on an end product

Are we the worse counter attacking team in the league?

Rather predictably, United then went 1-0 up, with Wayne Rooney’s goal little surprise to those watching.

Rooney had all the time in the world….

Bringing both Christian Benteke and Steven Caulker on in attack, Klopp looked to push for an equaliser, but Liverpool failed to repeat their heroics from midweek, and supporters were left deflated.

Being the better team for large chunks of games doesn't matter.
Moments decide football games, and Liverpool are mostly terrible at them.

If you can't score you don't win.. We are abhorent at finishing. Players are simply not good enough. Lallana should NEVER wear red again

Imagine losing twice and conceding with every shot to this #mufc team. No top 4 this season and rightly so. #LFC

A dreadful result against an appalling team that only underscores the need for a forward. #lfc

We outplayed them in every single aspect and still managed to lose. It's the United we all remember.

What is Klopp meant to do with these donkeys

There was, however, a faint glimmer of positivity…

Oh well, at least LVG stays for longer I guess.