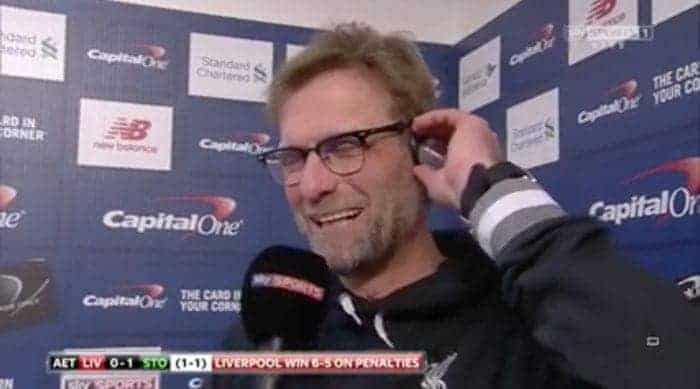 Klopp on a potential Merseyside Derby Final is interesting, but his interview sign-off is even better! More here: http://skysports.tv/m3PoIR

When thanked for his time by Sky Sports presenter Simon Thomas at the conclusion of the interview, Klopp nonchalantly replied, “You’re welcome. I had to! Everybody told me I had to!”, referring to his contracted media duties.

Having seen his side lose 1-0 to the Potters on the night, Joe Allen’s decisive penalty in the resulting shoot-out sent the Reds through to the League Cup final.

Liverpool’s final opponents at Wembley on Sunday, 28th February could be local rivals Everton should the Toffees hold onto the 2-1 lead they take over Manchester City into the second leg of their semi-final tie on Wednesday night.

On the prospect of an all-Merseyside final, Klopp told press, "I heard about it (a Merseyside final) being the biggest thing but only if you beat them.

"We will watch the game tomorrow and Man City being a goal down it is possible and if everything comes together in a good way it is a derby at Wembley.

"That will be great for the whole city. This city will have deserved it because it is a great place for football and how Blues and Reds live together in a normal life is how football should be.

"In a derby do everything that you can do to beat them."

Liverpool now turn their attentions to the FA Cup, in which they face West Ham at Anfield on Saturday.