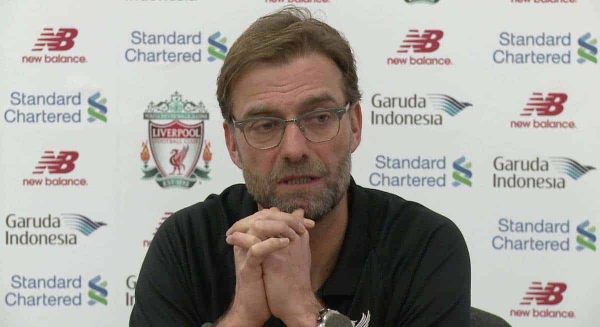 The Reds take on Mark Hughes’ Stoke, with both sides desperate to secure passage to this season’s League Cup final.

Liverpool head into this Anfield clash with a one-goal advantage, having defeated the Potters 1-0 in the first leg, courtesy of a Jordon Ibe strike.

Speaking to reporters on Monday, Klopp provided an update on his squad’s fitness, and spoke of his excitement ahead of what will be a “special atmosphere” at Anfield.

“We have the best situation you can have ahead of the second leg, we won the first game and now we play at Anfield,” he said.

“Let’s take the whole power of LFC and go to the final.”

Klopp said he would be happier if his side won 1-0 again, after witnessing a remarkable display at Carrow Road on Saturday afternoon, with Liverpool defeating Norwich City in a 5-4 thriller.

Though he bemoaned the Reds’ slow start against Norwich, Klopp said they should not lack motivation on Tuesday night.

“Reaching a final is great, but in the end it’s only memorable when you win it,” he continued.

“Tomorrow is only one target: go to the final.

“It’s football. You should not waste opportunities for winning something.”

Liverpool could be without Nathaniel Clyne for this semi-final, though Dejan Lovren has returned to full training after suffering hamstring injury in the first leg at the Britannia Stadium.