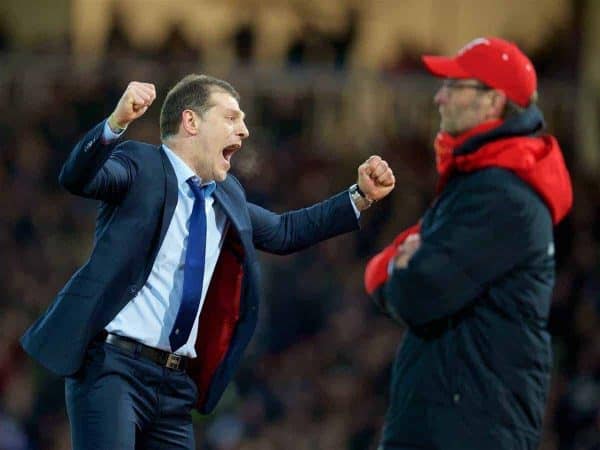 Following Liverpool’s gut-wrenching FA Cup fourth round replay defeat to West Ham on Tuesday, we round-up the best media reaction from the game.

Jurgen Klopp‘s young Reds side just did not deserve to go out in such cruel circumstances.

Angelo Ogbonna’s header in the last minute of extra-time saw Liverpool eliminated from the FA Cup, but they were the better side throughout, with the returning Philippe Coutinho levelling the scores after Michail Antonio’s opener.

Once again a lack of clinical finishing let them down, most notably from Christian Benteke, and Ogbonna’s winner was another set-piece goal conceded.

There were many positives on the night, however, with Daniel Sturridge looking superb off the bench, Lucas Leiva colossal at centre-back and Tiago Ilori, Pedro Chirivella, Kevin Stewart all excellent too.

Here is how the watching media saw the game:

James Pearce of the Liverpool Echo admitted that it was a heartbreaking night in east London, but singled out numerous Liverpool players for praise:

A night of rich promise for Liverpool in the capital culminated in heartache as they were dumped out of the FA Cup by Angelo Ogbonna’s last-gasp winner at Upton Park.

Just seconds away from their third penalty shootout of this marathon campaign the Reds were floored by the Italian’s defender pin-point header from Dimitri Payet’s free-kick. The curse of the set-piece once again.

It was a cruel end to a gutsy performance which had surpassed all expectations given the personnel on duty.

Pedro Chirivella, Kevin Stewart, Tiago Ilori, Joao Carlos Teixeira and Brad Smith – who boasted just 21 appearances between them before kick-off – could all hold their heads high. Jon Flanagan was a rock on his return to the side.

Pity poor Lucas Leiva, crestfallen at the end, who produced such an heroic shift as a makeshift centre-back as he repeatedly put his body on the line. The long-serving Brazilian, who was Liverpool’s fourth captain in as many FA Cup ties this season, led by example throughout.

The Telegraph‘s Jonathan Liew focussed on the pleasing return of Sturridge:

Shortly before the hour English football’s most gifted, pain-averse talent finally appeared on a football pitch, an occurrence so rare it brought local residents to their windows to see what all the fuss was about.

And for a man without a full 90 minutes in his legs since October, Sturridge actually looked a good deal better than you might expect.

There was one delicious nutmeg that served as a glorious reminder that when Sturridge is on form, he has the skills not only to pay the bills, but to make a sizeable down payment on the next instalment too.

Although Martin Samuel of the Daily Mail was impressed with Klopp’s approach to the game, he feels the need to strengthen this summer is still evident:

There will be those who question Jurgen Klopp’s selection for this match, even accuse him of disrespecting the FA Cup.

He did nothing of the sort. For a start, a man standing on the touchline roughly three days after an appendix operation is hardly treating the competition with contempt.

Klopp was supposed to stay seated throughout, but could not resist the odd march into the technical area to bark an instruction.

His team, too, was not what it seemed on paper. There may have been few first-team regulars — and one of them, Lucas Leiva, was played out of position at centre half — but a shake-up is long overdue at Liverpool and who knows where some of these new names will be when it is completed.

The Echo‘s Kristian Walsh was particularly taken with the midfield performance of Stewart:

It’s one of the unlikelier success stories of Liverpool’s season. Kevin Stewart‘s season – and, indeed, Anfield career – looked to be going nowhere.

On loan at Swindon, he suffered a knee injury in September. Another promising ‘kid’ – he turned 22 that same month – succumbing to the depth of big-money squads and household names.

As it transpires, everyone has had a chance this season. Not many have taken it as well as Stewart, however. He was one of Liverpool’s better players – being out-jumped by a savvy Angelo Ogbonna should not taint that – and he has been throughout the FA Cup run. With a youngster alongside him, Pedro Chirivella, Stewart looked like the senior pro, the Premier League player of plentiful appearances.

Some of his colleagues, and senior ones too, would be well-served to take note. There can be a lot said for discipline, holding position and playing on the back foot first.

Lucas (8/10) – Pressed into emergency action again at centre-back and produced a commendable performance. His positional play was flawless throughout; he made countless interceptions and clearances. The only criticism: The captain conceded some needless free kicks, including the one that ultimately decided the game at the death. In fairness, he barely touched Antonio Valencia, who was continually going to the ground all night under even the most minimum of contact. It was incredibly cruel on the Brazilian, who thoroughly deserved to be on the winning side.

Ilori (7/10) – Improved as the game progressed. Some sloppy passing out of defence twice almost caused problems for his side, while he was also fortunate not to concede a penalty for a second-half tug on Valencia, whose theatrical fall may have counted against him as the referee waved away his appeals. The young defender has not played much football this season and looked shattered even before the end of normal time, but he gutted it out and can be pleased with his performance.

Coutinho (7/10) – Back from injury and back on the scoresheet. He was denied by the post in the first half but found the net just after the break with an impudent free kick that he rolled underneath West Ham‘s wall, which had jumped in the air, expecting him to try and go over them. Replaced not long afterwards as a precaution, but Klopp will be delighted to have “the little Magician” back in the fold.