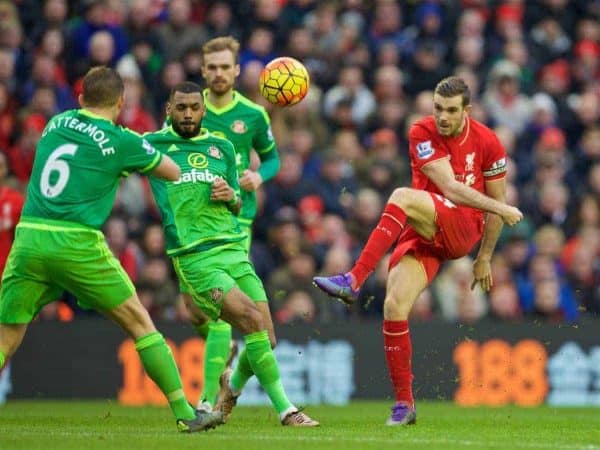 Liverpool gifted Sunderland a point at Anfield on Saturday afternoon, here’s how the watching media reacted to the game.

Can we just fast forward to the summer now please?

Once again an infuriating afternoon saw Liverpool’s lack of professionalism come to the fore, as they squandered a 2-0 lead at home to the relegation-threatened Black Cats.

Roberto Firmino and Adam Lallana looked to have set the Reds on their way to a comfortable victory, only for Simon Mignolet to gift Adam Johnson a goal back and Jermain Defoe to equalise in the dying minutes.

The Guardian‘s Andy Hunter bemoaned the quality of Liverpool’s performance:

Jurgen Klopp had his appendix removed by surgeons at Aintree hospital, two points removed by Jermain Defoe in the 89th minute and any notion about harmony at Liverpool removed by a mass protest against rising ticket prices at Anfield. Pity the poor soul who woke the Liverpool manager to tell him this result.

A low-quality spectacle was played against the backdrop of an edgy, impatient atmosphere that resulted in even the usually mild-mannered Lucas Leiva arguing with a fan behind the Liverpool dugout in the second half.

Liverpool enjoyed 82% possession in the first half yet their movement was predictable and threat minimal, as in the midweek defeat at league leaders Leicester City. Zeljko Buvac, Klopp’s Serbian assistant, attempted to cajole improvement from the touchline but that was not a straightforward ask against deep, unambitious opponents.

Injuries to Dejan Lovren and Joe Allen disrupted the rhythm too, the defender departing as a precaution against a previous hamstring injury and the midfielder with a similar problem that will require a scan.

Dominic King of the Daily Mail echoed that sentiment, admitting that this team is a far cry from the one of two years ago:

Again there was anger and again it was justified. Liverpool should not have come out of this clash with anything other than a win and all goals from Adam Johnson and Jermain Defoe exposed was how brittle Jurgen Klopp‘s side are and how fragile the bond is between the team and the Kop.

Without Jurgen Klopp patrolling the touchline – the German was in hospital after having surgery to remove his appendix – Liverpool struggled for long periods though goals from Roberto Firmino and Adam Lallana looked set to provide some solace on a miserable afternoon.

But this is the Liverpool of 2016, a team that has taken five points from the last 18. Erratic, horribly short of quality and lacking identity, not even an appearance in the Capital One Cup final is providing a welcome distraction. It is days such as these that illustrates how much discord there is.

To think it was almost two years to the day since Liverpool lit up this stadium with one of the most dynamic, ruthless performances of the modern era, a 5-1 evisceration of Arsenal in which they had raced into a four goal lead within 20 minutes.

That was so good, BT Sport made an advert about the game. This, for 45 minutes, was so bleak that even the official club channel would have struggled to edit something positive or entertaining from the ‘action’; Liverpool passed the ball back and forth but never went anywhere with it.

The Telegraph‘s Chris Bascombe felt it was a strange occasion all afternoon, with Jurgen Klopp‘s absence adding to the feeling of unease:

Jurgen Klopp’s absence on the touchline due to suspected appendicitis was one of numerous contributory factors to a strange, subdued atmosphere at Anfield.

Tension was already in the air due to the planned ticketing protests and the first half performance of the side did nothing to stir positive emotions, although there was a vast improvement in the second half before the ridiculous finale.

Klopp’s assistant Zelkjo Buvac took on the role of patrolling the technical area, but there was a feeling from the first whistle many in the crowd were counting down the clock until the 77th minute.

Liverpool’s coaching staff must be counting down the hours until the end of the season when they get to work on building a squad to rejuvenate Anfield.

David Maddock of the Mirror felt the Reds’ tactics were a little flawed because of their personnel, but admitted injuries didn’t help:

More than one manager has suggested this season that Klopp’s pressing tactics are all well and good, but you can’t press if the ball is flying straight over your head. It was a clever ploy from Sam Allardyce, and reduced the home team to very few chances.

In situations like that, the use of Benteke or the returning Sturridge (or both) off the bench early in proceedings was an obvious tactic, but Liverpool weren’t able to employ it because of the first half injuries, which meant they had to keep the final sub as insurance against another player limping off to avoid being reduced to 10 men.

That didn’t help Liverpool get any attacking momentum, or the numbers around the box they required. Their system relies on creating space for the full backs, and Moreno currently doesn’t have the intelligence in his passing to capitalise on the space he creates.

The need for width was no better illustrated than in the opening goal when it finally arrived on the hour mark. It was a simple execution, Milner got wide, crossed deep and Firmino cleverly came off his marker to head back across the keeper.

It’s not rocket science, and the second goal cam when Firmino himself drifted wide, to prove the point.

In his ESPN player ratings, David Usher was critical of Mignolet and Mamadou Sakho, but felt Firmino impressed:

Mignolet (3/10) – May as well have walked out of the stadium along with the supporters, as he failed to set up his wall properly and then allowed the resulting free-kick from Johnson to beat him at the near post. That put his team in an unnecessarily nervy situation and it was little surprise when they then conceded again soon after. The Belgian had earlier been lucky not to be punished after throwing the ball directly to a Sunderland player when attempting to launch a quick counter attack.

Sakho (5/10) – In a game where he had virtually nothing to do, the Frenchman was found wanting late on when finally asked to do some defending, as he was beaten too easily by Defoe for the Sunderland equaliser.

Firmino (8/10) – Went close twice with powerful efforts from distance before opening the scoring with a well-placed header. The Brazilian then turned provider after winning the ball in the Sunderland half and he showed good awareness to pick out Lallana for the second goal. A lively outing full of good link play and endeavour, his performance should have been the story from the game but calamitous play from those behind him ensured it wasn’t.

NEXT: How the national and international media reacted to the walkout protest