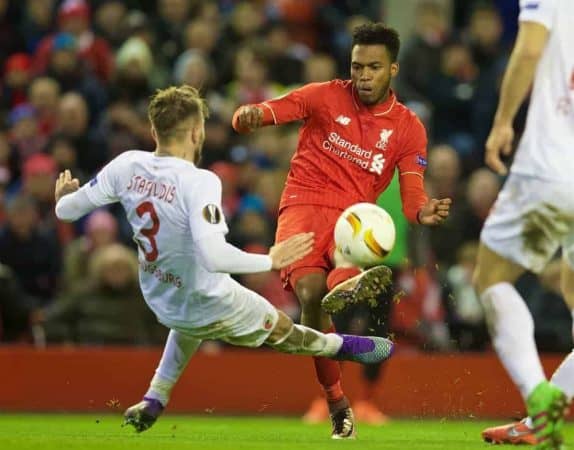 Job done, not emphatic, but deserved – How the media reacted to Liverpool 1-0 Augsburg

We round up the best of the media reaction after Liverpool reached the last-16 of the Europa League with a narrow 1-0 win against Augsburg at Anfield.

Jurgen Klopp’s Reds put a sloppy first leg behind them to see off Markus Weinzerl’s side with a dominant display on Merseyside.

Liverpool controlled the game for the vast majority at Anfield, despite James Milner’s fourth minute penalty proving the only difference between the two sides after 180 minutes of action.

Only a combination of saves from Marwin Hitz and sloppy finishing prevented the more comfortable win the play of Klopp’s side deserved – something that will need to improve if Klopp’s side are to win Liverpool’s first silverware since 2012 at Wembley on Sunday.

But it was a well-deserved victory for the Reds, who moved into the last-16 phase for the first time since 2011, and here is how the media reacted to the game.

As expected, Liverpool’s wastefulness in the final third and in front of goal that saw the Reds make heavy-weather of overcoming the Bundesliga side dominated post-match reports.

Chris Bascombe of The Telegraph wrote:

An early platform seemed an ideal opportunity for Liverpool to show poise and class – easing themselves to victory while preserving energy for their Wembley trip. Instead there was the customary relief at a narrow home win. It’s been a while since any Anfield victory was anything but torturous for The Kop.

Klopp could point to several missed opportunities and an opposing goalkeeper who repelled Daniel Sturridge and Roberto Firmino, but he’ll know the distance between where Liverpool are and where they need to be might need space travel to navigate.

Liverpool’s adventure in Europe continues but they made heavy weather of doing so; this was not the performance of a team that looks primed to deliver silverware.
Sluggish in parts and erratic in front of goal, Liverpool passage was secured thanks to James Milner‘s first half penalty but their profligacy was almost costly and Manchester City, Sunday’s opponents in the Capital One Cup final, will not be losing any sleep.

Here, an inability to make life easy for themselves was all the more infuriating given they were handed – quite literally – the perfect start.

Liverpool monopolised possession and chances, always appearing on the verge of catching the eye only for the final pass to prove wayward from midfield or the telling touch from one of their striker’s elusive.

David Maddock of the Mirror wrote:

While the creativity of movement and passing is there, the finishing isn’t yet. Not quite. In the first hour, Liverpool should have been out of sight, but spurned so many chances through a combination of uncertain finishing and some fine goalkeeping from Marwin Hitz.

They will need to take their chances against City on Sunday though, to have any chance.

However, the Independent’s Simon Hughes heaped praise on Augsburg stopper Marwin Hitz keeping the Reds out, rather than focus on Liverpool’s lax finishing:

Hitz, a goalkeeper who was charged and fined by the German FA two months ago for sabotaging the ground near the penalty spot before a kick was missed in a game against Koln, did require such skulduggery to enhance his display, for the performance of the Swiss was surely a career best, denying Liverpool a more comfortable victory.

More positively, there was praise for Liverpool’s dominance of proceedings and – at times electric – attacking play, with more goals and a healthier score-line the only missing components.

Liverpool were edgy in defence but their play in the final third showed the benefits of a first full week’s training since Christmas. There was greater intensity and understanding to their attacking performance than there has been for several weeks. The quickfire combinations between Philippe Coutinho and Daniel Sturridge on the left were a constant worry for the Augsburg defence.

Unlike the reverse fixture at the WWK Arena which ended scoreless last week, the Reds asserted their dominance from the off and were aggressive in and out of possession. They pressed and probed well.

It was a performance was filled with wonderful one-twos, step-overs, flicks and pirouettes, but the enterprising play was not reflected on the scoreboard.

On this, Maddock wrote:

Daniel Sturridge‘s return has revitalised the front line, and his partnership with Roberto Firmino is already looking as though it could blossom into something special, because the pair have an understanding that already utilises well their impressive movement…and will only get better.

With Philippe Coutinho also slowly returning to his best, this is a trio that can terrify defenders in time, because they are quicksilver and unpredictable, an enticing combination.

Liverpool have now kept three clean sheets for the first time since the first three games of the season. Klopp’s only change was to replace Kolo Toure with Lucas at centre-back and so, by selecting more or less the same side in three successive games, he has been able to breather much coveted continuity and rhythm into Liverpool’s play.

But though a night that was far from perfect, it was acknowledged firmly as “job done” for Klopp’s side ahead of Sunday’s trip to Wembley:

Everything just about worked out for Liverpool and Jurgen Klopp here. Progression in the Europa League was secured but not by playing an increased number of minutes and exerting more energy ahead of Sunday’s League Cup final with Manchester City.

Richard Jolly echoed sentiments with his assessment for the National:

This formed the warm-up. Liverpool go to Wembley having booked their place in the last 16 of the Europa League, kept a third consecutive clean sheet and buoyed by a win. This was job done, not as easily or emphatically as they may have hoped but progress was deserved.

But it was legitimate, as were Liverpool’s claims of a merited victory that provided Klopp with the preparation he craved before Sunday’s Capital One Cup final against Manchester City. His only complaint was the nervous finale – in which Kostas Stafylidis curled a free-kick a fraction wide in the 89th minute – which could easily have been avoided with more ruthlessness in front of goal.