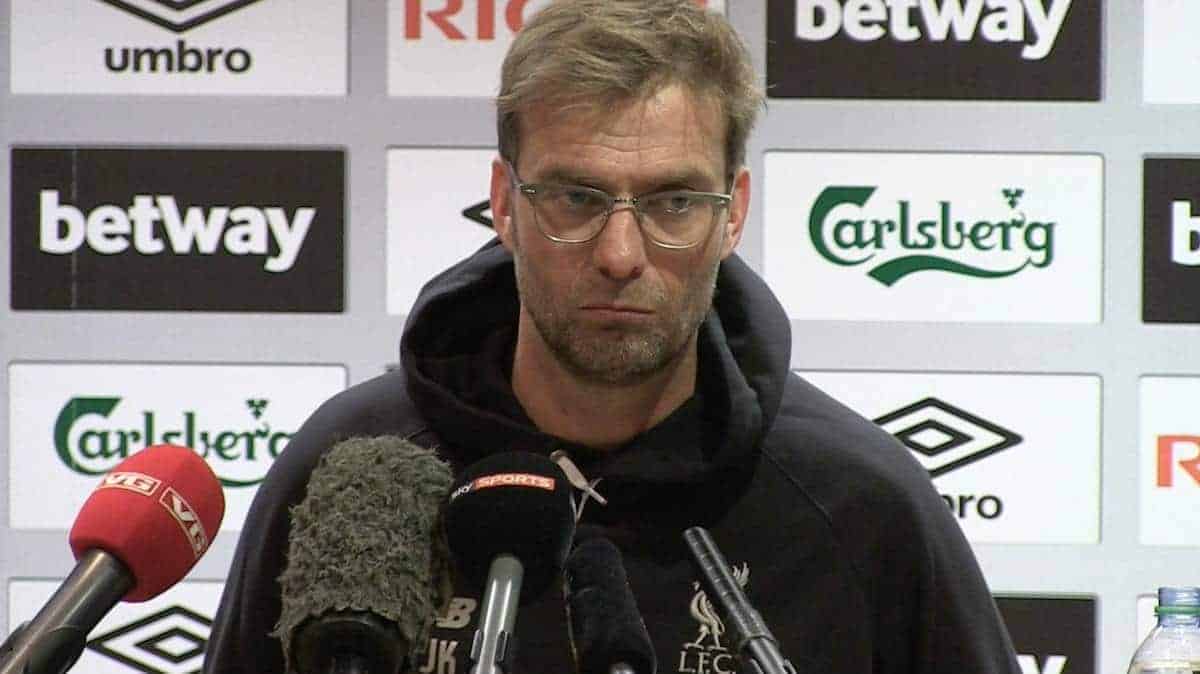 Liverpool boss Jurgen Klopp admits he and his squad don’t like their results at the moment – after conceding late, crucial goals in their last two games.

Angelo Ogbonna’s header in stoppage time of extra time provided a cruel end to Tuesday night’s FA Cup fourth round replay at Upton Park, with Klopp’s inexperienced side having done enough to have won the game against a strong Hammers side.

Although it was a different XI – only Simon Mignolet kept his place from Saturday’s league match against Sunderland – it was another example of Liverpool conceding late on, having thrown away a two-goal lead days earlier in the final 10 minutes.

“We don’t like our results too much to be honest,” said Klopp at his post-match press conference. “But it’s the difficult way that we have to go – but at the end it can be the right way.”

Liverpool are without a win in their last five games (losing to Stoke but beating on penalties is officially considered a loss in the record books) – their last win being the 5-4 victory over Norwich City on January 23rd.

The game against West Ham saw many positives though, especially the returns of attacking trio Philippe Coutinho, Divock Origi and Daniel Sturridge. Klopp is now looking to get momentum and consistency in the Reds’ lineup.

“We need consistency in the lineup – things where we want to change not where we have to change [players],” he said.

Exiting the FA Cup means Liverpool will have a free weekend in between their two leg tie against FC Ausburg later this month.

With 10 changes made for the match against Slaven Bilic’s side, Klopp went through the team to praise each player’s performance:

“Flanno was out for 18 months and played 120 minutes tonight – great. Tiago Ilori was at Aston Villa and not in the squad, not really a second-team player, and played really well tonight.

“Next to him, Lucas Leiva was not in his position and played really well. Brad Smith, four or five weeks ago he wasn’t at the club. The double-six [Pedro Chirivella and Kevin Stewart] are very young and were really good.

“But the only reason we were here was to go into the next round and so we are disappointed. That’s how it is.”