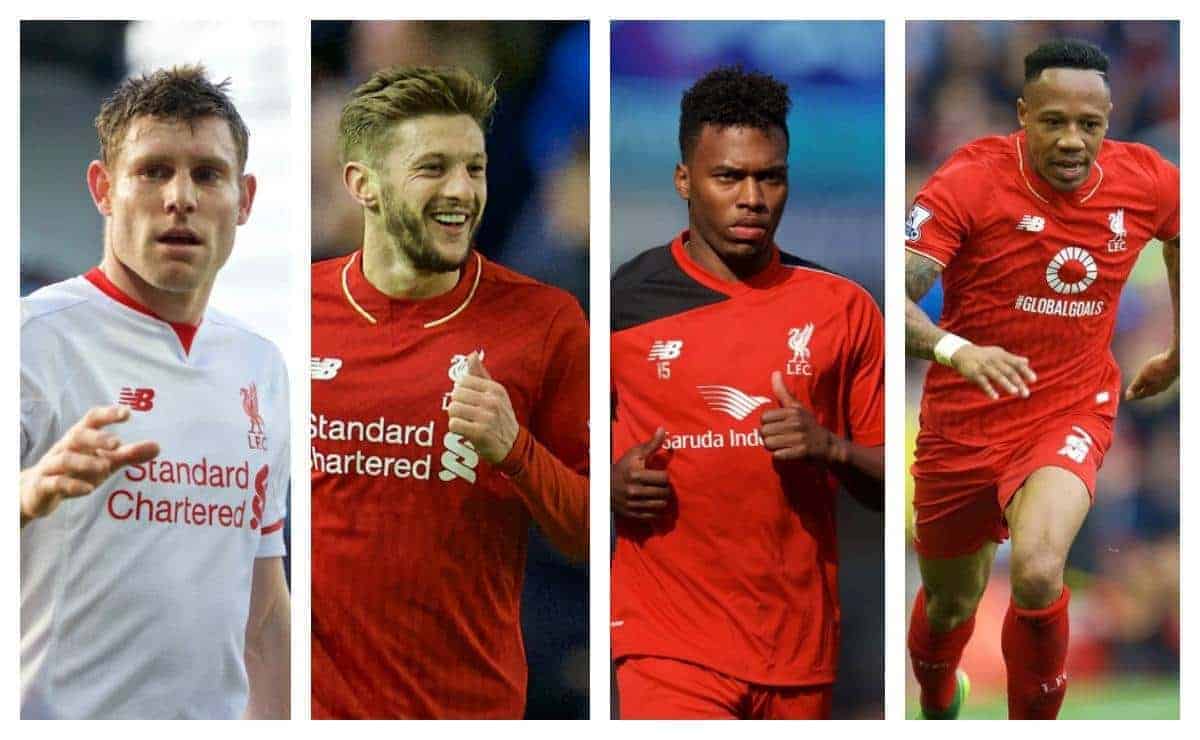 England slumped to defeat against the Netherlands at Wembley on Tuesday night, with four Liverpool players featuring in the Three Lions’ 2-1 loss.

After the euphoria of a comeback win against world champions Germany, it was back down to earth with a firm bump for England at Wembley.

In the exact type of game that makes international friendlies so unbearable, goals from Vincent Janssen and Luciano Narsingh sealed victory for Holland after Jamie Vardy’s strike put the Three Lions ahead.

It was a drab affair at the home of football, in which Nathaniel Clyne, James Milner, Adam Lallana and Daniel Sturridge all featured, with Jordan Henderson an unused sub – and here is how they fared.

It was a memorable night for Milner, who captained his country at Wembley, but he couldn’t mark the occasion with a fitting display, instead producing a forgettable performance.

Starting on the right side of England’s 4-4-2 diamond midfield, the Reds midfielder endured an unproductive outing, despite showing his usual selfless work rate.

To his credit, Milner was involved in a rare moment of quality for Vardy’s opening goal of the night before half-time, setting the move on its way.

Drifting over to the left flank to offer some much-needed midfield flexibility, the 30-year-old drove forward and cut inside before rolling the ball to Lallana, who turned and supplied the overlapping Kyle Walker to square for an in-form Vardy to fire home.

It was a positive moment of play involving all three starting Reds – Sturridge dummied the pass to Lallana – in a well-worked goal, but it was Milner’s only meaningful impact, playing as part of England’s four- and three-man midfield units throughout the contest.

A nice pass later on released second-half substitute Harry Kane through on goal, but in possession he lacked the killer instinct and quality to complement his desire, with his dead-ball deliveries and crossing predictably ineffective.

Overall, it was a poor display on a big night for Milner, who was replaced by Dele Alli in the closing stages – but being the most used player under Hodgson, his place in the Euro 2016 squad is not in any danger.

After playing 71 minutes in Germany and with 10 changes expected, it was slightly surprising to see Lallana start.

But keeping his place, and playing on the left of England’s diamond midfield, the 27-year-old enjoyed another impressive evening as one of England’s brighter performers.

Sharp and intelligent with his interchanging movement and technical play, Lallana was often the man behind the few positive moments Hodgson’s side conjured up.

He linked well with Danny Rose and Sturridge in particular at times in the first half – shown best as he played a vital part in Vardy’s goal, turning cleverly before feeding Walker to tee up the Leicester striker.

Constantly looking to spark patient if unthreatening buildup play to life, Lallana sent a curling strike wide after the break – an effort a player of his quality should have done better with, to at least test Jeroen Zoet.

That came minutes before he ghosted in from the left – after a switch to a 4-3-3 – to find space between Dutch lines, turning well, driving with purpose and setting Vardy to strike at goal, with the Leicester City man’s rasping drive tipped over the bar.

It would prove Lallana’s final contribution of a decent night, with the attacker withdrawn on 70 minutes for Harry Kane.

After spending the night on the bench in Berlin, Sturridge entered into Hodgson’s starting lineup against the Dutch.

The England manager stated prior to kick-off that Sturridge was returning “back to the player he was,” but on a big night, with the striker scrapping to prove his starting credentials ahead of in-form Kane and Vardy, he endured a quiet evening.

In a 57-minute display, Sturridge’s overall impacted was limited due to the low-key nature of the encounter, but on an individual level, he showed glimpses of quality.

A disjointed display and little service did nothing to help him establish a partnership with Vardy, forcing Sturridge to drop deeper and drift wide to find a way into the game.

Pulling to the left channel, he linked well with Lallana and Rose on occasion and played a key part in the goal, showing his intelligence by cleverly dummying Milner’s pass to create extra space for his club team-mate to manoeuvre.

After the break, a neat piece of control followed by a sharp turn and strike forced Zoet into a save, but it was the only meaningful effort Sturridge registered all evening.

Perhaps the best part of the night with Sturridge – outside of his improved sharpness of movement – was Hodgson’s management of the striker; taking him off before the hour mark, seemingly unscathed, making a nice change from wanting to “test his resolve.”

Though not a blistering display, there can be no doubt of his quality or place in the squad for France.

After a real positive outing in Germany, Clyne – as expected – dropped to the bench with Walker replacing him at right-back.

In Hodgson’s first substitutions of the night, Clyne entered for the final half-hour, taking Rose’s place at left-back, where he has featured at times for Liverpool.

Within seconds the 24-year-old fired a wild volley at goal – a signal of intent for his desire to contribute to a blunt attack, which was impressive during a cameo which saw him offer a marauding outlet.

Clyne was as reliable as ever in his defensive work and tidy in possession, doing nothing to undo the good work of his performance against the world champions three days ago.