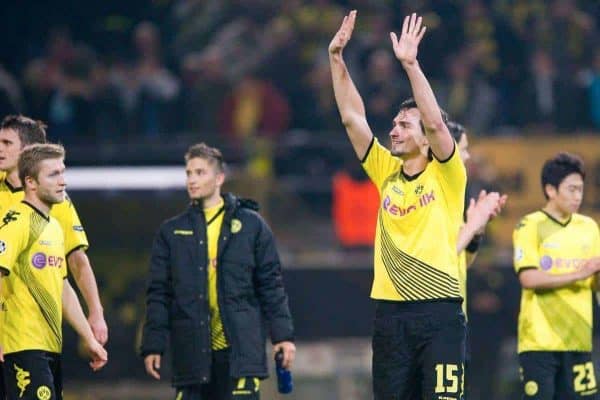 A quiet international break has thrown up a number of Liverpool transfer rumours, including a move for Borussia Dortmund’s Mats Hummels.

With club matters adjourned as a monotonous international break continues, the rumour mill churns out an increasing number of transfer stories.

Seemingly the main target for this scattergun tabloid approach, Liverpool have been linked with myriad summer moves over the past week, namely a growingly feasible bid for Bayern Munich’s Mario Gotze.

Jurgen Klopp will no doubt look to add to his signings of Joel Matip and Marko Grujic this summer, though the extent of his overhaul on Merseyside remains to be seen.

Here are the latest players to be linked with moves to and from Liverpool this summer.

Goals from Harry Kane, Jamie Vardy and Eric Dier embarrassed a defence including current Liverpool star Emre Can and summer target Jonas Hector and while another player rumoured to be interesting Klopp was withdrawn at half-time: Dortmund captain Hummels.

The Express claim an exclusive as they reveal Liverpool scouts watched Hummels in Saturday night’s defeat, and while the 27-year-old didn’t produce his best performance, it makes sense why.

Hummels is a multi-functional, top-level centre-back who could shine alongside any of Matip, Mamadou Sakho and Dejan Lovren, whose leadership and winning mentality would boost the Reds.

But were Liverpool really in Berlin to scout Hummels?

With Can, Jordan Henderson, Nathaniel Clyne and Adam Lallana all in action on Saturday, as well as James Milner and Daniel Sturridge both featuring on Hodgson’s bench and Gotze coming on to make a second-half cameo for Low’s Germany, this seems highly unlikely.

Atletico Madrid, West Ham United and Juventus are all said to be considering summer bids for the disappointing Christian Benteke, with the Belgian likely to leave Merseyside just one season after making a £32.5 million move from Aston Villa.

But as Klopp looks to mould his squad for 2016/17, buried in a Mirror report claiming Atletico’s interest comes an intriguing prospect: swapping Benteke for Roma midfielder Leandro Paredes.

Paredes is currently on loan at Empoli, thriving alongside another Liverpool target, Piotr Zielinski, and has garnered interest from around Europe this season.

The 21-year-old is a dominant, all-round midfielder, as tenacious as he is technical, and could provide Klopp with another midfield general to deploy alongside the blossoming Can next season.

The Mirror claim that, with Roma having scouted Benteke last summer before moving for Man City‘s Edin Dzeko, the Stadio Olimpico side could revisit their interest in the striker at the end of the season.

Swapping Benteke for Paredes would be a welcome option for Liverpool, but whether this is feasible is unclear.

If Benteke leaves Liverpool, Klopp could look to add another striker, to supplement his trio of centre-forwards in Daniel Sturridge, Divock Origi and Danny Ings.

According to reports in Argentina, this could see River Plate star Lucas Alario join the Reds, with the Express relaying word from South American outlet Infobae, who claim Liverpool have made a bid in the region of £5.6 million this month.

River Plate are believed to want closer to £8.5 million for the 23-year-old, who has scored 10 goals in 22 appearances for the club since arriving from Colon last year.

Liverpool could be encouraged by words from the striker, who told TyC Sports that “given the choice, I’d like to experience the Premier League, and I’d like to play for Liverpool.”

Serving as a ‘come and get me’ plea to the Reds, Alario may heighten Klopp’s interest in a summer deal, and while the Argentinian may not be the big-name signing supporters are hoping for in attack, this could be a gamble that pays off for Liverpool.

Like Benteke, Mario Balotelli is unlikely to have a long-term future under Klopp at Liverpool, and currently enduring a hit-and-miss season on loan with AC Milan, could avoid a permanent move to Serie A at the end of the season, too.

Instead, Balotelli is said to be considering a big-money move to join Chinese Super League side Jiangsu Suning.

Il Milanista, an off-branch of Italian publication La Gazzetta dello Sport, claims another exclusive for the international break, suggesting Balotelli could join Jiangsu and earn close to £12 million per season.

This would see Balotelli’s wages boosted to £230,000 per week, almost triple his current wage at Liverpool.

Balotelli would join Brazilian trio Ramires, Alex Teixeira and Jo in Jiangsu, in an environment that could pander to his languid style of attacking play.

Whether these claims are credible or not is hugely questionable, but with reports claiming Balotelli could leave for the Chinese Super League at the end of the season, it is certainly a possibility.