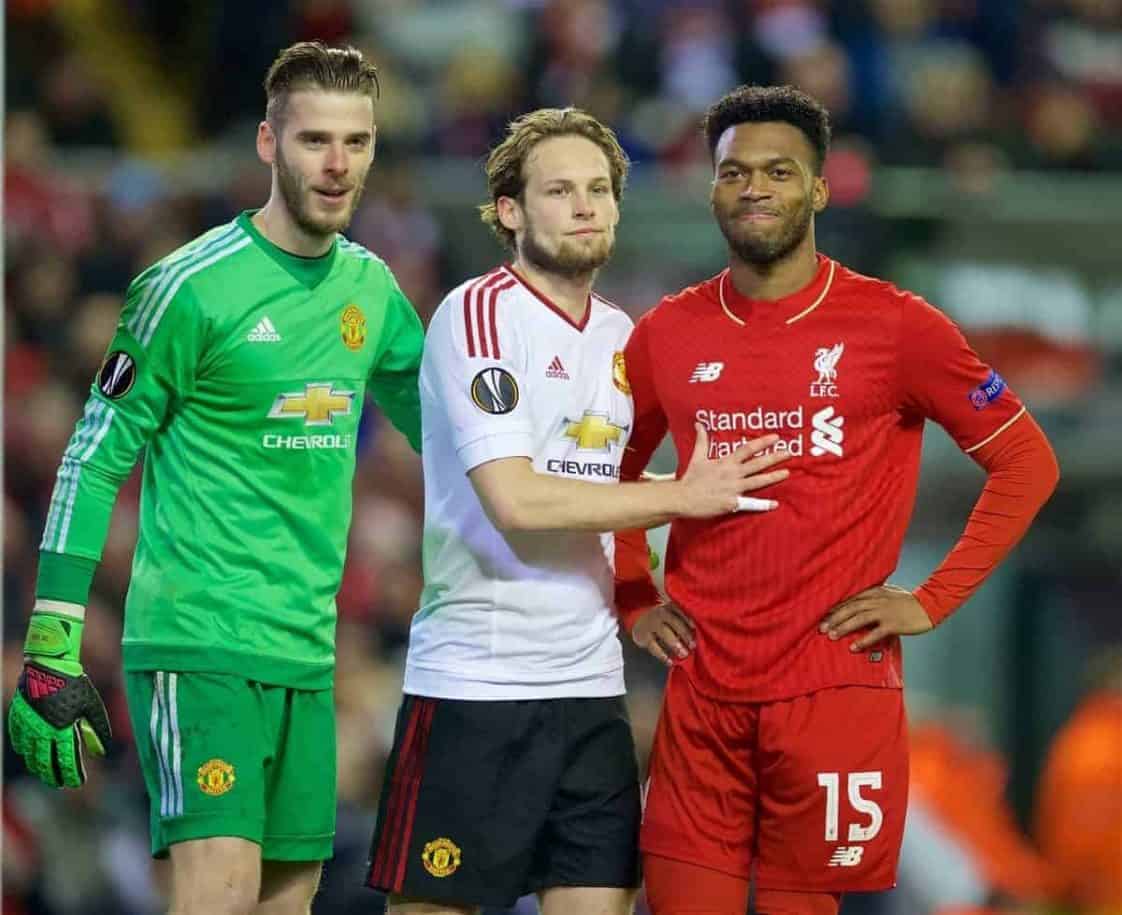 As Liverpool prepare for the crucial Europa League second leg at Old Trafford, we select three key battles that could determine who progresses to the last-eight.

Jurgen Klopp’s side arrive at the home of the old enemy looking to finish the job they started so perfectly on Merseyside a week ago.

Boasting a two-goal cushion thanks to Daniel Sturridge and Roberto Firmino’s strikes on another memorable Anfield European night, the Reds are in a commanding position to reach the quarter-final stage.

But despite the comfortable lead, it will be anything but a straightforward task for Klopp’s men to secure their advancement, with United set to come out all guns blazing as they attempt to salvage their European campaign.

How Liverpool stand up to the challenge at a hostile Old Trafford is crucial, and here are three key battles that we expect to prove pivotal.

As it was at Anfield a week ago, this high-quality battle between Liverpool’s key striker and United’s best player will be crucial again at Old Trafford, with it capable of ending or prolonging the contest.

De Gea was United’s man-of-the-match a week ago and the only reason van Gaal’s side find themselves still in the tie following the Spanish stopper’s inspired performance last week.

A number of fine stops from the Spain international denied the Reds sealing the last-16 tussle in the first leg and proved just what a fine ‘keeper the ex-Atletico Madrid man is.

Sturridge did net the vital first goal of the tie from the spot – which De Gea managed to get a hand to – but the United No.1 later denied him extending Liverpool’s lead with a great block save as an even duel between the two played out.

In top form, Sturridge’s finishing is among the most lethal in the country and he will need to display it on Thursday night against a ‘keeper who has single-handedly won United many a game over recent years.

The Reds striker has an excellent record against United having notched four goals in just six appearances and another sweet strike on Thursday will be his aim again.

Sturridge will know he is up against one of the very best in De Gea, but the goal-machine will need to come out on top at Old Trafford as the Reds look to confirm their last-eight place.

Expected – and needing – to take the fight to Klopp’s side, United could make Marouane Fellaini central to their planned fight-back at Old Trafford.

Not afraid to play a direct game, the Belgian – who is fortunate to be able to feature after somehow escaping punishment for a nasty elbow on Emre Can at Anfield – could be a main figure in van Gaal’s rescue act.

Fellaini’s aerial prowess could see him play a more advanced role with him an obvious target for long balls and crosses, and if United deploy that approach, there will be a big onus on Dejan Lovren to stifle the ex-Everton man in the physical battle.

Having previously found joy against Liverpool in the left channel area where United stationed their forward outlet, Lovren could have a key role to play against the bombardment expected, and will be required to compete as well as he did up against the Belgium international last week.

Though naturally conceding height to Fellaini, Lovren battled well and even when he lost out, he did enough to at least prevent the Belgian planting his knock-downs and flick-ons where wanted, applying enough pressure to nullify his impact.

Lovren has won 4.1 aerial duels per-90 minutes this season – the most of Liverpool’s regular centre-backs – and in much improved form under Klopp, the 26-year-old’s aerial dominance will be vital up against the equally adept Fellaini.

This will be one key battle in the tense second leg.

Vital to the outcome of this mouth-watering contest will be who imposes their game more on proceedings out of two key components for either side.

Firmino has developed into a real key figure for Liverpool as the season has progressed, growing into a leading role for Klopp’s team that has seen the Brazilian post nine goals and eight assists this season.

The summer arrival’s clever offensive play will be crucial to the Reds reproducing the slick attack that United couldn’t cope with at Anfield, but equally important will be his defensive work, which will be needed to counteract the impact of Carrick.

The experienced campaigner endured a miserable outing at Anfield – at fault for Firmino’s goal – as van Gaal deployed him in the middle of a back three, but he could return to the midfield set-up to provide United with a play-making influence as they look to control proceedings.

Carrick’s passing range and vision can pick apart even the tightest defences, and Firmino has an important role to disrupt the England international’s influence, dropping in to prevent the United No.16 dictating play, allowing Emre Can and Jordan Henderson to hold the middle of the park.

Firmino is a brilliant presser of the ball with his high-energy style, and he needs to display it at Old Trafford as he did last week to prevent Carrick running the game and putting the Reds under pressure.

Who comes out on top here will be another duel that’s shapes the final outcome of this do-or-die contest.