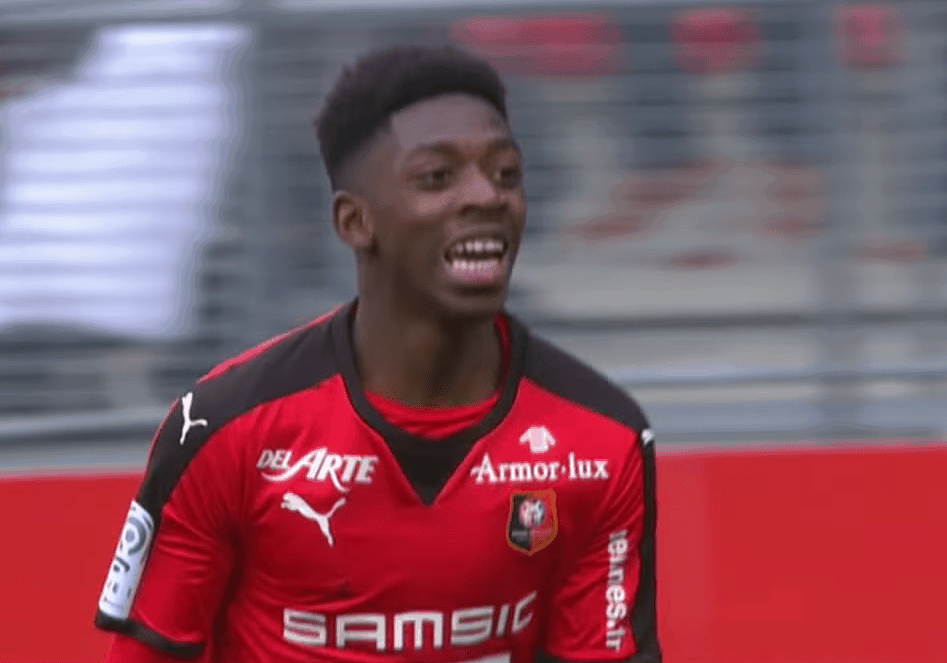 While Jurgen Klopp will be looking for proven talent on the wings this summer, Rennes’ 18-year-old star Ousmane Dembele should also be a target.

The term ‘wonderkid’ is bandied about far too often in modern football, but when a talent as precocious as Rennes’ Dembele emerges, the acclaim is deserved.

Enjoying a breakout campaign with the Ligue 1 outfit, Dembele has garnered interest from around Europe, including Arsenal, Barcelona, Bayern Munich, Chelsea and Juventus.

Meanwhile rumblings on social media suggest Liverpool have scouted the winger throughout 2015/16.

Rightly so, with the 18-year-old having established himself as a unlikely key player at Roazhon Park.

But who is Dembele, and why should Liverpool be pursuing him ahead of the summer?

As to be expected, as little as 12 months ago, Rennes weren’t quite aware of the calibre of talent they had at their disposal in Dembele.

The winger was operating in the club’s U19s and reserve sides, while he and his agent harboured disappointment at the level of facilities made available to him, believing that he should be training alongside the first team.

Dembele spent just four sessions with the senior side throughout 2014/15, instead continuing to showcase his ability with 13 goals in 18 appearances for the reserves.

Over the summer, Rennes rejected overtures from Man City, Benfica and Red Bull Salzburg, with the latter fronted by Head of Global Football Gerard Houllier.

The youngster eventually signed a new deal with the club, after the appointment of former Man United centre-back Mikael Silvestre as project manager.

Silvestre personally oversaw discussions regarding Dembele’s future, having revealed it took only 30 minutes of watching him play to be convinced of his vast potential, with the 38-year-old’s conviction persuading manager Philippe Montanier to promote him to the first team.

Dembele signed a three-year contract in October, and made his debut a month later—a big step for an 18-year-old.

“I will take a chance and say that he can win the Ballon d’Or,” Silvestre gushed.

“I saw Cristiano Ronaldo at the same age at Manchester United, and Ousmane has characteristics that remind me of a young Cristiano.”

Silvestre’s comparison may stick in the throats of those that have seen wonderkids churned through the mill in recent seasons, so what makes Dembele stand out from the crowd?

Chelsea‘s interest in Dembele is no surprise, as the 18-year-old is exactly the type of winger they have been flooding their academy with in recent seasons, as the rise of Bertrand Traore in Guus Hiddink’s first team shows.

Dembele is a pacy, direct wide player who is comfortable both drifting inside to attack the penalty area and driving towards the byline to deliver crosses from the flanks.

Interestingly, he is also adept at dropping deep to pick up the ball and set off dangerous attacking moves.

He is at his best, however, taking the ball, turning towards the opposition and taking on defenders before unleashing a shot on goal.

What aids this devastating attacking approach besides blistering pace is Dembele’s two-footedness.

He is as comfortable on his left as he is with his right, making him an invaluable option on the flanks and in the No. 10 role, with defenders unable to determine his actions.

This has helped Dembele to nine goals and three assists in 17 Ligue 1 appearances so far this season, including a strike on his full debut against Bordeaux.

Most recently, Dembele scored a hat-trick in Rennes’ 4-1 win at home to rivals Nantes—becoming the youngster player to score three goals in a Ligue 1 match since Jeremy Menez in 2005.

The player most comparable to Dembele is this stage is perhaps former Reds winger Raheem Sterling; both are pacy, versatile attackers at their best with their heads up, driving at defenders.

However, what both Dembele and Sterling also share at this early stage their careers is poor decision-making.

Dembele often shoots when it is better to pass, for example; Sterling the opposite.

Furthermore, primarily used as a focal attacking outlet, Dembele’s defensive contribution is far from what would be required under Klopp at Liverpool but, as with his decision-making, this is a hallmark of his youth—Dembele remains a raw prospect, despite his impressive maiden campaign.

At just 18, Dembele looks destined for the very top, and if he can sustain this level of high performance, he would be an exceptional signing for the Reds—but where would he fit in?

Where Would Dembele Fit in at Liverpool?

As with any winger linked with a move to Liverpool ahead of 2015/16, there is a clear, defined role for Dembele within Klopp’s squad.

With the German actively pursuing more quality on the flanks this summer, the likes of Philippe Coutinho and Roberto Firmino can expect to be joined by another high-quality attacking option.

Dembele has been largely utilised on the right flank in recent weeks, and this would see him slot in comfortably within Klopp’s forward line.

The Frenchman’s ability to interchange with other attackers would make him an invaluable option, with both Coutinho and Firmino looking to drift around the final third looking for space.

If Liverpool were to take a punt on the 18-year-old, he is likely to take up his position on the right wing.

While Klopp indicated that he would be looking for a more experienced option, Dembele’s overriding quality, and his consistency throughout 2015/16, could change his stance.

Signing 19-year-old Marko Grujic, likely for a regular first-team role, underlines Klopp’s faith in youth, and this could extend to Dembele.

His pace, direct style of play and the variety of his attacking movement would make him a great player to alternate with Lazar Markovic, Jordon Ibe and Adam Lallana.

However, his price tag may be an issue.

With the likes of Barcelona and Bayern circling ahead of the summer transfer window, Dembele won’t come cheap.

But if Klopp can convince him that Merseyside is the best move, he would be a strong addition; Dembele is a pre-eminent young talent.