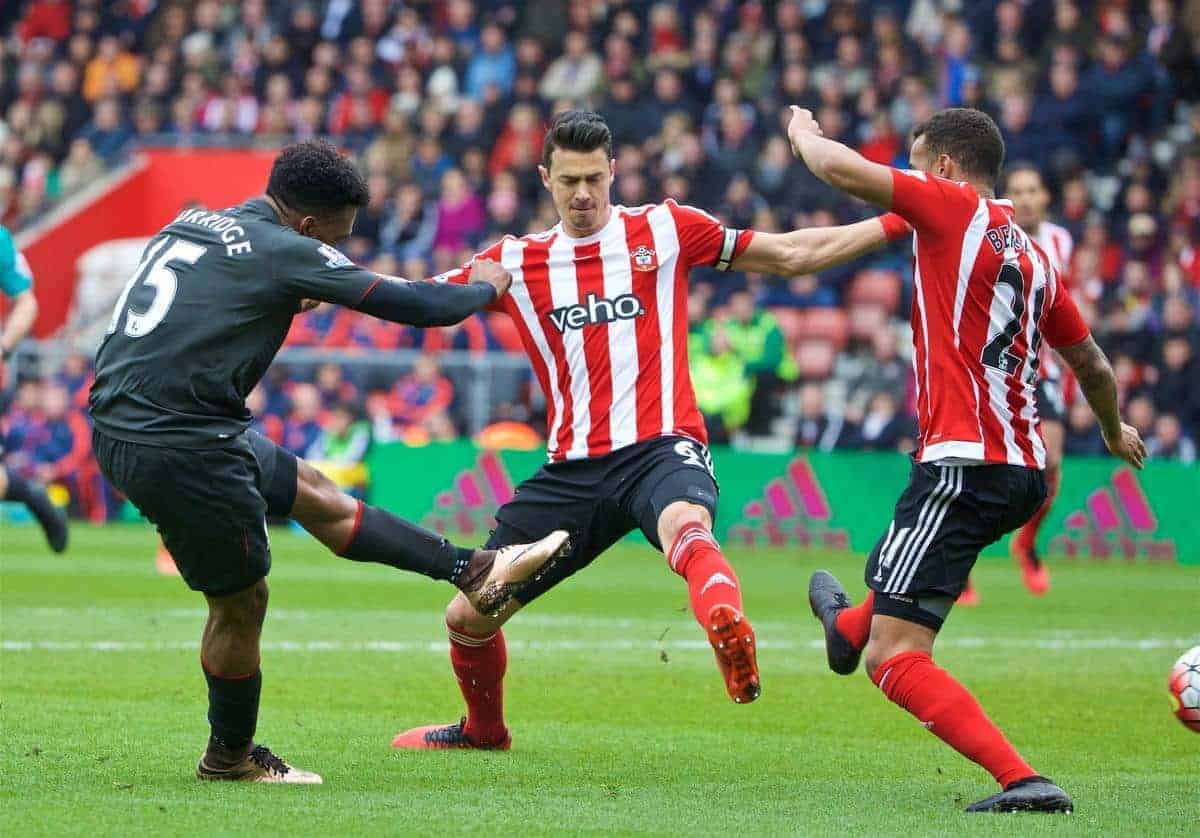 Liverpool somehow threw away a two goal lead at Southampton, suffering a second half collapse to lose 3-2 – a match that provided plenty of talking points.

First half goals from Philippe Coutinho and Daniel Sturridge looked to have Jurgen Klopp‘s Reds on the way to a fourth successive league win for the first time in 12 months.

Liverpool were absolutely cruising at half-time and should have been more than two goals ahead. But the half-time subs completely changed the game.

In the League Cup match at St. Mary’s in December, Ronald Koeman got his half time changes completely wrong – dropping Victor Wanymana into a back three. Here, he brought on Wanyama and Mane and the duo were influential in Southampton‘s comeback.

As Liverpool tired – this match arriving on Sunday lunchtime after the Thursday night match at Old Trafford – and lacked options from the bench, the home side gained more and more control.

While Koeman enjoyed success with his half time changes, Klopp’s had the opposite effect…

Back in March 2013, Martin Skrtel put in an absolutely abject performance in a 3-1 defeat at Southampton. So bad that Brendan Rodgers brought Jamie Carragher, soon to be retiring, back into the fold and Skrtel started just once in the rest of the season.

It looked like being the game that saw him leave the club. But somehow Rodgers restored him the following season, and Skrtel played well as the Reds pushed for the title.

Despite that one good season, Skrtel is the one constant in Liverpool’s constantly problematic defence in recent years. The Slovakian gave away a penalty within three minutes of his introduction, his trademark shirt pulling finally being penalised.

The 31-year-old won no tackles, blocks or interceptions, created panic throughout the defence and was woeful in Mane’s matchwinning goal.

Klopp’s decision to bring on Skrtel, who hasn’t played this year due to injury and was sent off for the under-21s four days ago, instead of Kolo Toure, who has been playing superbly recently, is a baffling one.

With Joel Matip arriving this summer, Skrtel’s days are numbered.

The last time Sturridge and Divock Origi started up front together was on this same ground in the League Cup, as the Reds won 6-1.

The combination worked again, with Origi showing good pace and physical presence; a good foil for Sturridge who seems more at home with a proper partner alongside him.

The Reds lost impetus in attack after Sturridge was subbed for Christian Benteke – who missed an excellent chance to make it 3-0.

Lots of sites run ‘things we learned from this match’ articles, but this was again a case of things we already knew; Skrtel isn’t good enough, the Liverpool goalkeeper needs to be able to kick the ball down the pitch, Benteke isn’t good enough, Liverpool need more quality added to what they have.

Klopp’s subs weren’t great; Skrtel instead of Toure was a huge oversight. Not providing help for Emre Can and Joe Allen as they clearly began to be overrun by Wanyama’s introduction was another – but perhaps Jordan Henderson wasn’t fit enough to come on.

Upgrades will come this summer, the manager will know where the problems are – after all, he’s seen them at Newcastle, Watford and Southampton this season.

Klopp insisted post-match that hopes of a top four finish were not lost. “Still 27 [points] to get, right?” he said.

“Nine games. We can get all of them. It is difficult; we don’t have to dream, we have to play football.”

Truth is, this was a huge loss, a huge opportunity after West Ham drew yesterday and with at least one of the Manchester clubs to drop points in the derby.

There’s no way Liverpool finish in the top four this season, and all the eggs go into the games against Dortmund.

Klopp brought on Sheyi Ojo for his Premier League debut, and should provide the likes of Ojo, Danny Ward and other youngsters their chance in these final nine league games.

Defeats before an international break are never easy to accept, Klopp now has a fortnight with plenty to think about. Summer plans will be formulated.