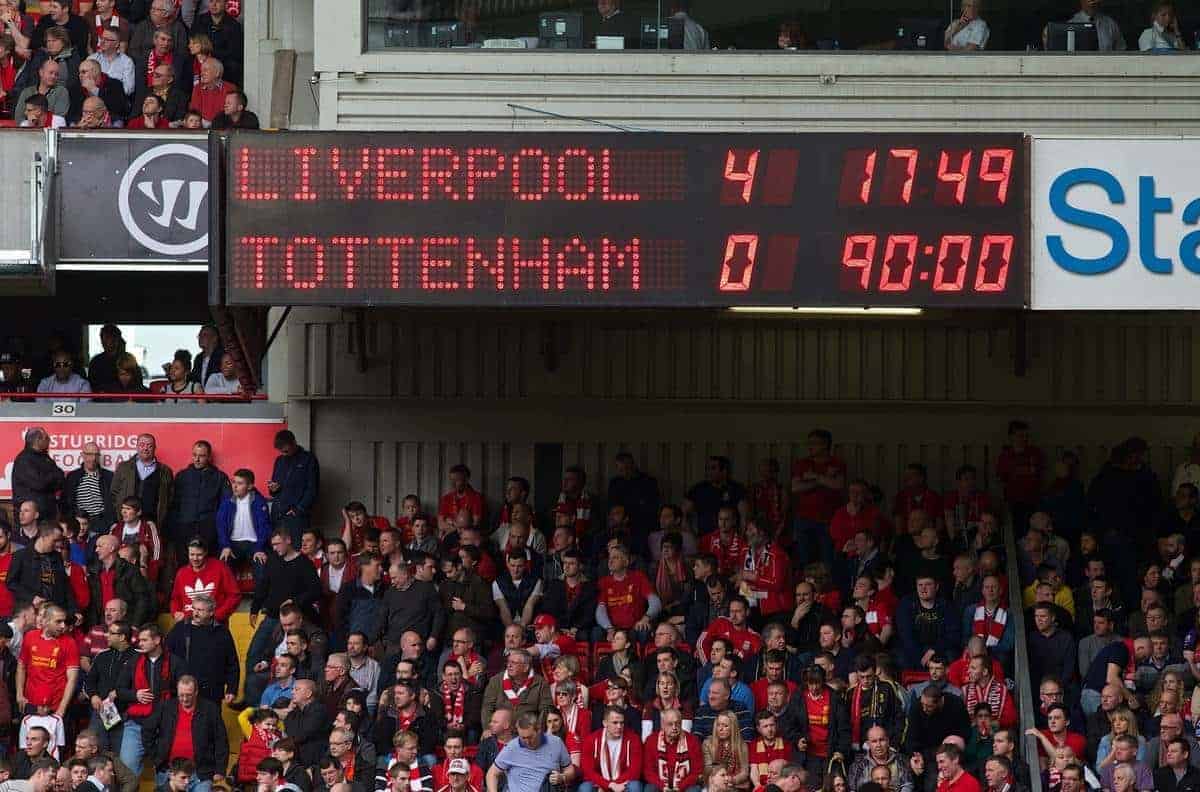 Liverpool host title hopefuls Tottenham on Saturday night when the Reds will be looking to continue their dominance of Anfield clashes to secure three big points.

Saturday’s clash between Jurgen Klopp’s Reds and Mauricio Pochettino’s Spurs is a big game for both sides for different reasons.

With three points of paramount importance for the visitors in their title push and for Liverpool in their battle to secure European football, each manager will be desperate for victory at Anfield.

Winning maximum points in clashes involving the two clubs in L4 is something the Reds have found a much easier task in comparison to their North London counterparts over the years.

Though, naturally, to be expected that Liverpool enjoy better fortunes in games on home soil, the Anfield side’s historical dominance of this long-standing fixture is quite something.

Courtesy of the excellent LFCHistory.net, in 80 Anfield meetings Liverpool have lost just eight, drawing 22 and winning 50 – a staggering control over this annual game that has become something of a home banker.

The Reds have lost just one of the last 17 Merseyside encounters, with Spurs’ only win in that time coming in 2011 when Harry Redknapp’s side claimed a rare 2-0 away victory in the final home game of the 2010/11 campaign.

That wet and miserable afternoon at Anfield saw goals from Rafael van der Vaart and Luka Modric hand the visitors only their second ever Premier League win over Liverpool on Merseyside – which is still the case now – as well as their first success since a 3-1 League Cup victory in 1998.

Fittingly for this fixture, Liverpool ruthlessly followed up that loss under the joint-management of Roy Evans and Gerard Houllier with five straight home successes – the second-longest winning run after collecting a stunning 12 consecutive successes between 1973 and 1985.

Liverpool have even won each of the last three home games against Saturday’s opponents – winning 3-2, 4-0 and 3-2 again last season thanks to Mario Balotelli’s winner – a triumphant run Klopp will be hopeful of adding to.

Though Spurs haven’t had much to shout about when visiting the red half of Merseyside recently, Maurico Pochettino certainly has.

The Argentinian guided his Southampton team to victory in September 2013 on his first visit as a manager, winning 1-0 courtesy of Dejan Lovren’s header.

And with a well-drilled, in-form side who boast the best offensive and defensive records in the league and pose a much sterner test than Spurs teams of yesteryear, he will be confident of picking up a second win to improve Tottenham’s dreadful record and keep the pressure up on Leicester.

But at a crucial stage of the season, needing to keep the league campaign alive, Klopp will be desperate to record a fourth straight home win over Spurs – one that would see the dominance continue for another year.