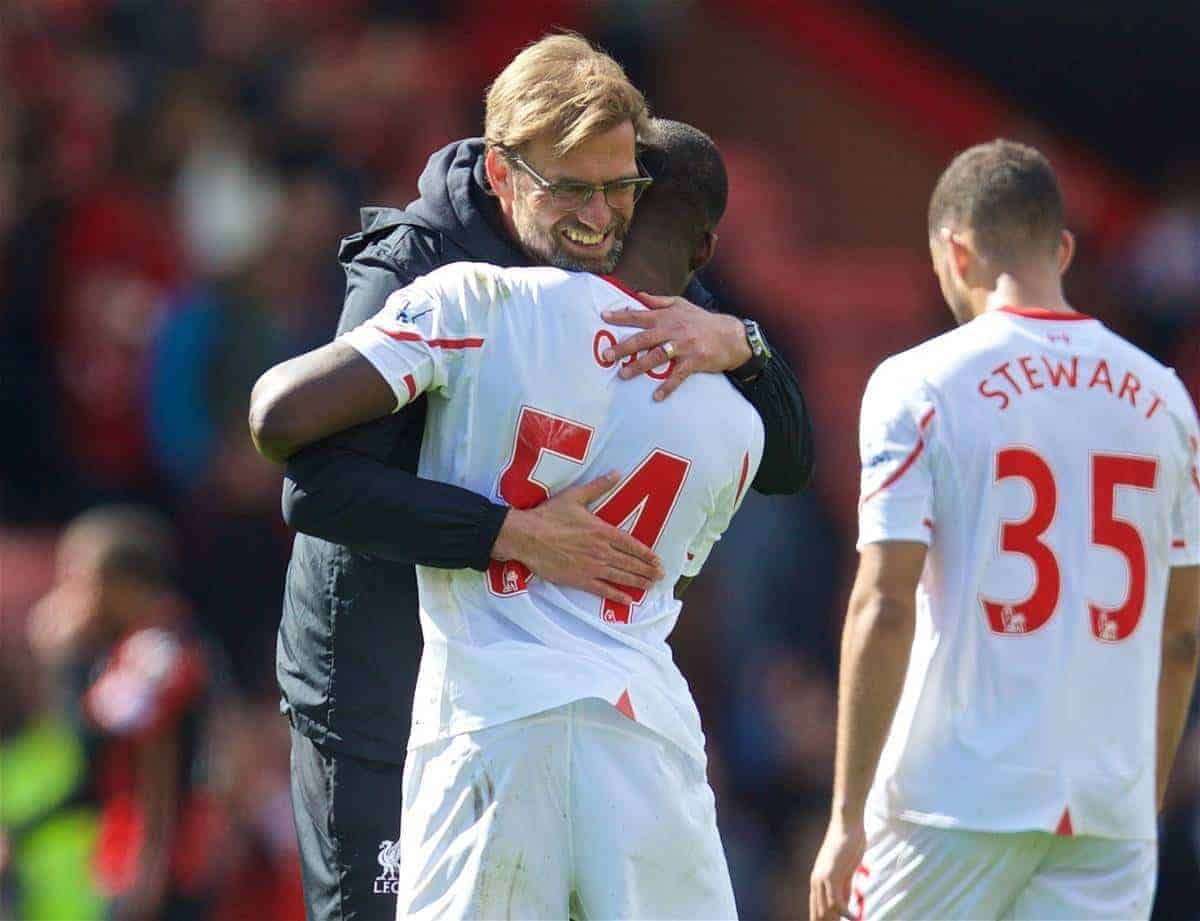 We round up the best of the media reaction from Liverpool’s productive 2-1 win over Bournemouth on Sunday afternoon.

Jurgen Klopp’s much changed Liverpool secured a pleasing three points against the Cherries to make it three wins in a row in all competitions.

It was a pleasing performance and result from a side that saw 10 changes made after the spectacular Borussia Dortmund win on Thursday night, including six academy graduates who all impressed and proved their readiness for future opportunities.

Here is how the media reacted to the Reds’ first ever league match at Dean Court.

After sealing a third straight win in a week with a makeshift team, reporters focussed on a good seven days for the Reds and the impressive collective spirit throughout Klopp’s squad.

The old boys stunned Dortmund and the kids clattered Bournemouth. It’s been quite a week for Jurgen Klopp, who was able to rotate his squad to an absurd extreme yet still found himself in the hunt for a top-four finish.

The top four is beyond Liverpool, but the willingness of Klopp to trust and to rotate is keeping the Reds fresh.

He regularly uses the word “greedy” to describe what he wants from his players, and this was a hungry display from a side which had enough excuses not to be.

Jurgen Klopp may have fielded a heavily altered Liverpool line-up in the 2-1 win at Bournemouth, but there was no change in the desire to get the job done.

As the German has repeatedly stated and sought to effect at the club, names on the teamsheet are secondary to the collective.

However, the BBC’s Dafydd Pritchard felt the team selection showed Europa League is the priority for Klopp now:

Liverpool still have a slim hope of finishing in the top four but winning the Europa League is their likeliest route to Champions League qualification – and Klopp’s selection suggested he agrees.

Of course, after such a tough, dramatic night at Anfield, you’d expect a few of the players that beat Dortmund to sit this one out.

Ten changes, however – with even keeper Simon Mignolet rested – suggests Klopp sees the Europa League as more realistic than bridging that ten-point gap between Liverpool and the teams in the top four.

Producing a sharp, goal-scoring display as he moves closer towards rediscovering his best form, there was much praise for Daniel Sturridge.

The Guardian’s Alan Smith wrote on his “sharp” display:

Sturridge, however, was undeniably the story. After another campaign troubled by muscle problems, he suddenly looks sharp. He gave Tommy Elphick and Steve Cook a torrid time here, scoring his sixth league goal in only his eighth start.

For the Independent, Ian Winrow assessed:

For the second time in two weeks, Sturridge provided the ideal response to being left out of the starting line-up for the Europa League meeting with Borussia Dortmund.

… while the manager was keen to spread praise around his unfamiliar looking team and keep the focus away from the striker, there was no doubt the England forward’s contribution was decisive.

Sturridge lit up what for most of a lifeless first half was a classic case of after the Lord Mayor’s show.

He provided the injection of class required to ensure that momentum was maintained on the back of the club’s European heroics.

Yet far from feeling slighted, Sturridge showed an impressive attitude from the start. Bournemouth, despite their honest endeavours, simply could not cope.

Elsewhere, David Usher praised a leading performance from Joe Allen in his player ratings for ESPN:

Very good performance from the Welshman who linked the midfield and attack well with typically accurate short passing. Won back possession frequently and was always available for a pass. Almost created a goal for Sturridge after winning the ball off Dan Gosling and delivering a perfect through ball that the striker collected, only to be denied by the post.

Pearce echoed on the Welshman’s display:

Joe Allen maintained his outstanding form with another tireless display in the middle of the park.

Time and time again the Welshman sensed danger, broke up play and put Liverpool back on the front foot.

Meanwhile, Lucas came in for criticism by the Independent for a “woeful” showing at centre-back:

Liverpool’s Lucas was woeful in central defence. There was a time, under Kenny Dalglish, when he established himself as an excellent defensive midfielder, but he did not once look comfortable. For a team that has so many options in defence – albeit underwhelming ones – surely there’s a better option than watching the Brazilian being bullied by Joshua King?

More positively, there was deserved praise for numerous of the six youngsters who repaid Klopp’s faith with impressive performances.

The Telegraph’s Tom Prentki felt the youngsters did Klopp proud:

But Liverpool have lost just two of their last 14 games and confidence seems to have an alchemy of its own as his young players did the German proud.

The young right-winger has impressed recently and produced another couple of skillful moments to light up this affair. Not least when he ghosted past two Bournemouth players in the box before his shot was blocked.

They like him up at Anfield and it is easy to see why.

And while his development this season has not been as rapid as some hoped, or even expected, there still lies a seriously talented footballer in that No.33 shirt. One that can play a big part for Liverpool in years to come.

Back in the starting line-up for the first time since January here, Ibe delivered a much-needed step in the right direction.

The 20-year-old, has found his chances severely limited since then, but turned in an incisive performance. He set-up both goals and created five chances – the most of any player in the game. He also topped the table for attempted and completed take-ons, and was unmatched in attacking third passes.

He’s had to wait for his chance at Liverpool, but when it came Danny Ward grabbed it with both hands.

Given his Reds debut, the young Welshman was a composed presence, and did all that was required of him. He kicked well – further than Mignolet, and with no dallying or hesitancy – handled well, communicated clearly and made one fine save in particular from Lewis Grabban.