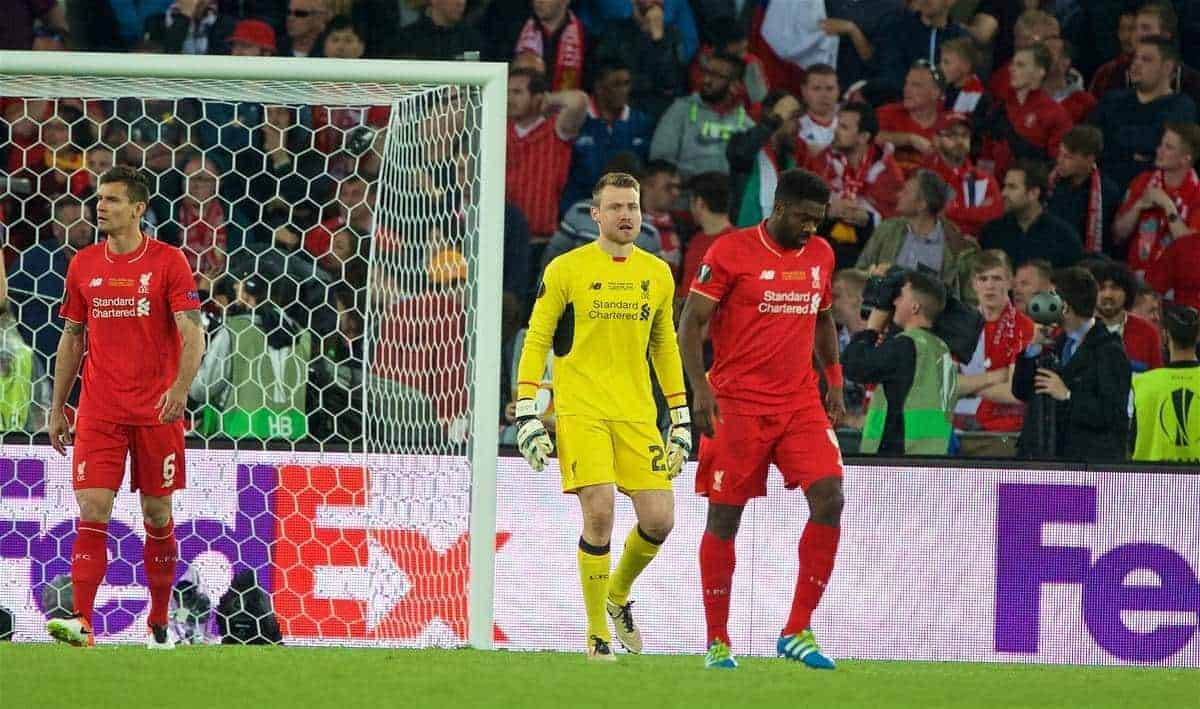 Following Liverpool’s heartbreaking 3-1 defeat to Sevilla in the Europa League final, we take a look at how the fans reacted on social media.

For 45 minutes, it looked as though the Reds were on their way to a glorious victory, but things went horrible wrong after half-time.

Daniel Sturridge‘s wonderful first-half strike sent the travelling Liverpool supporters wild, but that was the high point of the game from a Reds perspective.

Kevin Gameiro scored seconds after the restart, and Coke found the net twice, as Jurgen Klopp‘s side melted in their biggest match of the season.

It was a bitter pill to swallow, and although there are plenty of positives to take from the campaign, two defeats in two finals this season has to go down as a big disappointment.

There was a wonderful atmosphere in Basel prior to kick-off, as Liverpool fans took over the city…

Basel is Red! Not seen a single Seville fan! #LFC

That is just absolute genius. What a sensational footballer.

The technique is pure filth

That was a world-class goal from Daniel Sturridge. Absolutely stunning.

Liverpool fans in full voice now! Get in! pic.twitter.com/N5n54cgtLz

Fans gave their thoughts on an impressive first-half performance…

HT: Liverpool 1-0 Sevilla. Sturridge scores with a gorgeous finish with outside of his left boot. Reds well on top. Need this 2nd goal now

Really good last 20 minutes from #LFC there, fully deserve lead. Must keep up that pressure after HT, don't let Sevilla get on front foot.

The Reds section is singing along to The La's 'There She Goes' inside St. Jakob-Park after a brilliant first half from #LFC.

It won't surprise you to learn that Uefa stats have Milner as covering the most distance in the 1st half . 5.88km. Strong 1st half from #LFC

Ended well. Gotta keep them out & frustrate the crap out of Banega & Krychowiak.

Sturridge (red dots) has had 17 non-kick-off touches to Gameiro's 8 (blue). Keep that up and we'll get home. pic.twitter.com/Y1pI29lIOU

Sketchy start, but once we got on front foot & started the press we've dominated. I'd be tempted to get Phil on right where space is

Supporters were stunned shortly after, as Liverpool capitulated after half-time…

Fucking get a grip Reds. So sloppy!!!

Poor clearing header from Moreno, who is then nutmegged

Folks…its Liverpool, in a cup final. This was NEVER going to be straightforward. Keep the faith.

#LFC really on the ropes now. Desperately in need of a change.

Right, Liverpool. Can you take this seriously, now?

As Sevilla were celebrating Milner raced across to touchline for a chat with Klopp. #LFC need to change something. Wretched 2nd half so far.

What on earth has happened here? Classic Liverpool.

A new left back ASAP

Moreno needs shipped out as soon as

#LFC didn't play our own game tonight, decisions aside

We found the level. This is where we are. Not as good as some think, not as bad either.

Coutinho miles off the pace. Has been poor since Utd away. And cracking two goals into the bottom corner isn't playing well.

Tale of two halves. After a nervy first few minutes we bossed them, got the goal we deserved, but not the TWO penalties we also deserved. The officiating was nothing short of horrific.

Second half was an utter bottling, and an absolute sham from those players – that was a slap in the face to the thousands of fans who spent their hard earned cash to be there to support the team. Coutinho was completely anonymous, Can was very poor, and Moreno was just horrific.

We had our chance to win the game 1st half + Lovren 'goal' + ref calls. Sevilla brilliant 2nd half (+ LFC sloppiness) they know how to win.

Next season will be Klopp's Liverpool

Lots of finger-pointing going on at Moreno, who was abysmal second half, but FAR from the only one. Lovren, Can, Firmino all very bad.

One of the worst halves I’ve seen us play this season. Total collapse. Shambles.

Terrible second half. Unfortunately bottled it again on the big occasion. Hope we get some mentally stronger players in the summer.

Can epitomised the performance. Played like a captain 1st half, little boy lost in the 2nd.

Our biggest achievement this season is signing Jurgen Klopp. That'll do for now. Next season, we go again. Judge then.