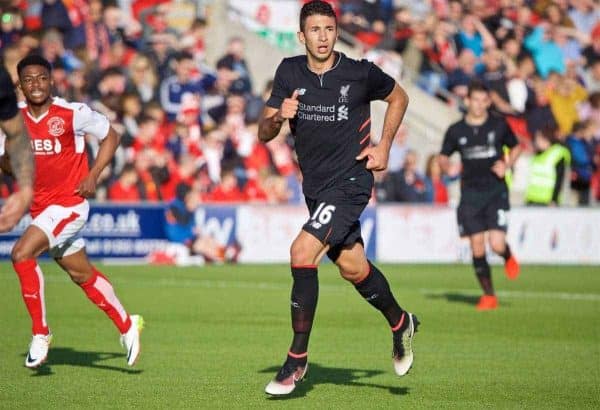 Marko Grujic scored on his first start for Liverpool as the Reds put five past Fleetwood Town in their pre-season friendly.

The new signing made a bright start to his Reds career with an impressive performance which included a goal in the first half.

Grujic started in midfield as Klopp named a relatively unchanged squad and the Serbian earned a penalty for Liverpool shortly before scoring the opener but Ings’ strike was saved by the Fleetwood keeper.

Ben Woodburn built on the strong impression he made against Tranmere by scoring Liverpool’s second shortly after half-time, and there were goals for Firmino and Lucas too.

Pedro Chirivella made way for Grujic but Sadio Mane was up front once again alongside Danny Ings and Lazar Markovic. There were also starts for new signings Joel Matip and Loris Karius, who had 45 minutes last week.

Trent Alexander-Arnold was rewarded for his play which led to Ings’ winning goal on Friday evening with a start in midfield, and the youngster looked composed once again.

He had a quieter evening though and despite making a few runs in behind the defence, his performance was a no-nonsense one in midfield.

Matip and Dejan Lovren, who started together against Tranmere, looked comfortable in the centre of defence but weren’t massively tested by the League One side.

Liverpool had some defending to do early on as Fleetwood’s youngsters produced some good attacking play, but neither side tested the ‘keeper until Markovic delivered a fizzing ball into the box—which was picked up easily by Chris Neil.

Grujic showed his willingness to get forward from midfield and had the first half-chance of the game but was unable to make any real contact with his header. The former Red Star Belgrade midfielder earned Liverpool a penalty shortly afterwards though when his step-over encouraged a foul inside the box.

Ings’ strike from the spot wasn’t his best and it was a comfortable save for the Fleetwood keeper.

It didn’t take long for Grujic to score Liverpool’s opener though, and on 18 minutes his strike found the back of the Fleetwood net after good link-up play from Mane and Alberto Moreno down the left.

Liverpool exploited their width in the first-half with Alexander-Arnold linking up well with Markovic and Jon Flanagan down the right. Moreno and Mane had the most success on the left though, and the former Southampton striker caused the defence problems for the entire half.

Mane’s pace and quick feet got Liverpool into some encouraging positions, and his combination play with the Spanish left-back was impressive.

The second half saw 11 changes once again and youngsters Ryan Kent, Ovie Ejaria and Woodburn, who impressed on Friday evening, were all given another chance to shine behind Firmino.

It was Kent’s run down the right which created the first chance of the second half and Woodburn was on hand to score his first senior goal for the club.

The 16-year-old looked delighted and Liverpool continued to produce an energetic and youthful display in the second half as the Fleetwood keeper was tested on numerous occasions when Kent, Woodburn and Firmino linked up well in attack.

It was a quieter display from Ejaria after impressing last week and he seemed to drop deep in search of the ball, but it was his through pass which put Woodburn in a one-on-one situation with the Fleetwood keeper, leading to Firmino’s goal.

There were a few scares when Liverpool gave possession away cheaply in dangerous areas but they quickly added a third as Firmino, Kent and Lucas Leiva linked up well before the Brazilian’s strike found the back of the net.

Firmino fired the fourth when Woodburn was unable to drag the ball fully around the keeper and the striker came through and fired the ball past the two defenders on the goal-line.

Connor Randall came into the game towards the end of the second half, making positive runs down the right wing and Liverpool added to their goal tally before the 90 minutes were out when Firmino scored his second.

Woodburn’s cross from the left gave the Brazilian a tap-in and although Fleetwood had a rare look at the Liverpool goal shortly before, the game ended 5-0 to Liverpool.

Overall, it was a confident performance from Liverpool, who looked to have added more tempo in their play from last week. Grujic was the outstanding player of the evening but there were bright performances from Mane, Woodburn and Kent.

Markovic had another quiet game and struggled to get involved but apart from that, there were plenty of positives from Klopp’s side and he’ll be looking to build on that in Sunday’s friendly clash against Wigan Athletic.