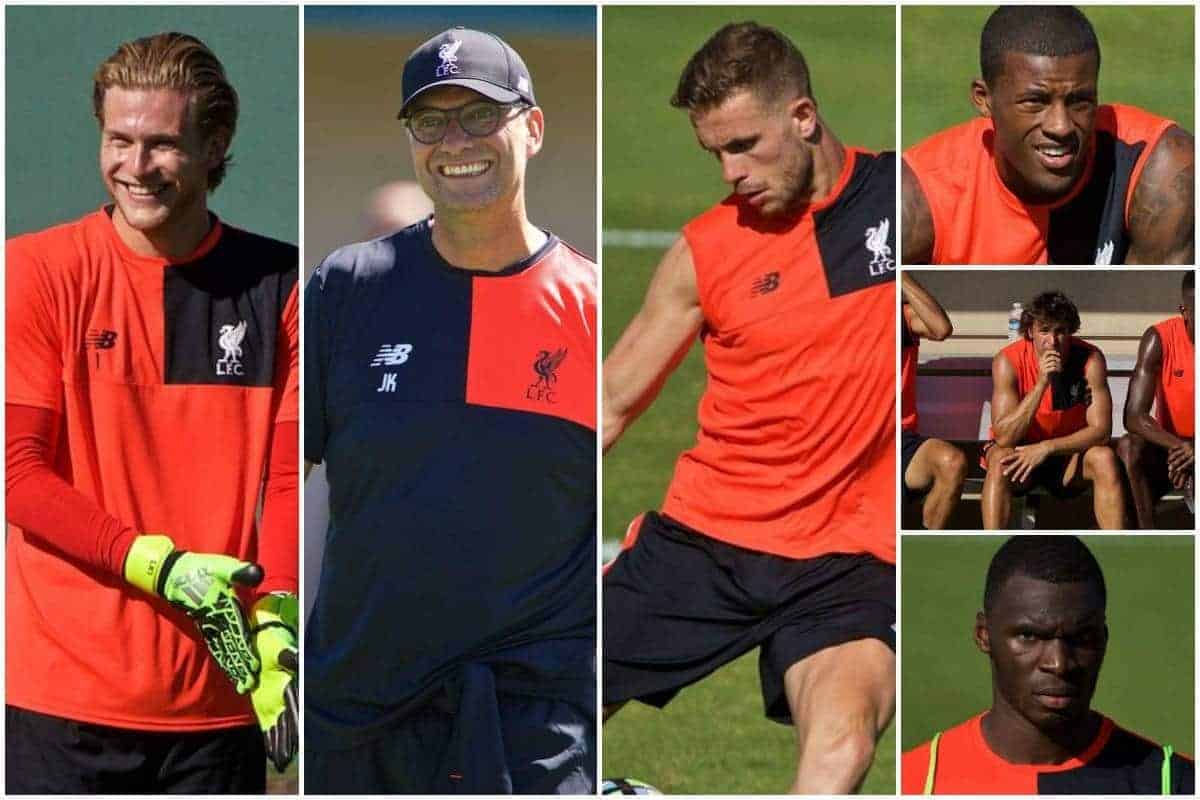 With Liverpool midway through a gruelling pre-season, there are a number of things for Jurgen Klopp to work on before the new Premier League campaign gets underway.

We are now four matches into the Reds’ nine-game schedule this summer, and there have been numerous positives to take from them.

New signings such as Loris Karius, Joel Matip and Sadio Mane have fitted in seamlessly, and the squad is hitting peak fitness under Klopp’s rigorous training methods.

Four wins in succession, against Tranmere Rovers, Fleetwood Town, Wigan Athletic and Huddersfield Town, has been the perfect start to pre-season, with no goals conceded.

Liverpool are now in the United States gearing up for their imminent clashes with Chelsea (July 27), AC Milan (July 30) and AS Roma (August 1), giving Klopp more opportunities to perfect his plans before their Premier League opener at Arsenal.

Here are five things Reds supporters should learn as Klopp’s squad get to work across the Atlantic.

Who is Klopp’s First-Choice Goalkeeper?

Simon Mignolet‘s performances in 2015/16 left a lot to be desired, and his inconsistency left many longing for Klopp to bring in an upgrade between the sticks.

He acquired the services of Karius, who since arriving from Mainz for £4.7 million has really looked the part—albeit without being tested greatly.

The German’s distribution has caught the eye more than anything—one of several areas Mignolet fails to convince in—and there is an authority and confidence about him that goalkeepers need.

Mignolet has now joined up with his Liverpool team-mates following his post-Euro 2016 summer holiday, and he will be desperate to prove he should still be Klopp’s first-choice ‘keeper moving forward.

As it stands, it would that appear that Karius will be the man to start at Arsenal in a couple of weeks, but that may change on the Reds’ tour of the US.

What Happens to Liverpool’s Fringe Players?

Klopp has been moving quickly in the transfer market this summer, attempting to get the vast majority of his business down as soon as possible.

While various new faces have been brought in, it has also been intriguing to see the way in which the 49-year-old has dispatched of a number of squad members too.

Kolo Toure, Martin Skrtel, Joe Allen, Jordon Ibe and others have all moved on, and there are several players whose futures remain uncertain.

Lazar Markovic is another who is likely be on his way out, and Lucas Leiva, Christian Benteke and Andre Wisdom will be among those sweating over their futures.

Klopp is such a perfectionist that he will have his squad looking exactly as he wants it come the end of the transfer window.

His use of players between now and the start of the season should be a clear indication of who will stay and who is not wanted. One of the most interesting things to come out of pre-season will be seeing which system Klopp opts for ahead of the new campaign.

His preference for a 4-2-3-1 formation throughout his managerial career is well-known, but he has also used the 4-3-3 heavily in the first four games of the summer.

Part of Klopp’s final decision will no doubt be down to his personnel, and whether he can fit all of his key men into a certain system.

Could Emre Can and Jordan Henderson thrive as a double pivot? Will Roberto Firmino continue to shine as a No. 10? Does a three-man midfield offer more balance and defensive cover?

All these things, and more, will be whirring round Klopp’s brain, and we are likely to see what his formation of choice will be in the coming weeks.

Where Will Wijnaldum Play? The signing of Georginio Wijnaldum has raised a few eyebrows this summer—not because of his talent, but because of Liverpool’s already sizeable number of midfielders.

The Dutchman is a very versatile footballer, though, and his ability to flourish in several positions has appealed to Klopp.

The fascinating thing now will be to see how the Liverpool manager uses his new big-money purchase, whether it be in a 4-2-3-1 or 4-3-3 formation, or another system entirely.

Starting in a double pivot would negate some of Wijnaldum’s attacking qualities, but with Mane, Firmino, Philippe Coutinho and Adam Lallana among those tussling for places in attacking midfield, it is hard to see where he would fit in there.

The best bet is for the 25-year-old to be used as one of the more attack-minded central midfielders in a 4-3-3, but Klopp will know further once he has used him in pre-season.

What Does the Future Hold For Henderson? Few players cause a debate quite like Henderson, and it really is tough to predict how his Liverpool career will pan out from this point on.

There are doubts over whether is he is quite good enough to take the Reds to the next level, however, and his role as captain is not particularly secure.

Liverpool’s US tour will be crucial for Henderson, in order to prove he is back to full fitness, and capable of playing a starring role next season.

His place is genuinely under threat, following the signings of Wijnaldum and Marko Grujic, and Klopp will not hesitate in relegating his captain to the substitutes’ bench.

It is very easy to forget how effective the 26-year-old was a couple of years ago, and if he can find that level again, he can be an important player for Klopp.