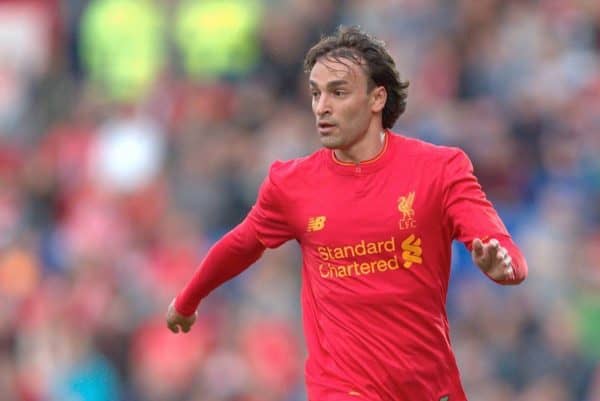 Serbian winger Lazar Markovic may be culled from Jurgen Klopp‘s Liverpool squad ahead of 2016/17, with a host of European clubs interested.

The 22-year-old returned from a season-long loan with Turkish side Fenerbahce this summer, and arrived at the Reds’ Melwood training facility early.

Despite Markovic’s bid to impress Klopp and earn a place in his first-team squad for 2016/17, the former Benfica star will be allowed to leave the club.

That is according to Goal’s Melissa Reddy, who reports that Portuguese club Sporting CP are among those interested.

“No formal talks have occurred yet, but Liverpool are attempting to source the best possible move for the attacker,” Reddy writes, “and would not discount the option of another loan agreement if there is a sizeable fee attached.”

Clubs from Serie A and La Liga are also said to have made enquiries as to Markovic’s availability, while Fenerbahce were looking to keep him in Istanbul for a further season.

But a reunion with his old Benfica manager, Jorge Jesus, seems most likely, with the 61-year-old confident he can resurrect Markovic’s career.

However, Markovic has featured in both of Liverpool’s pre-season friendlies so far, suggesting he is not quite surplus to requirements at this stage.

Luis Alberto and Mario Balotelli have been omitted from Klopp’s selection for the Reds’ warmup schedule, while Jordon Ibe was also left out ahead of his £15 million move to Bournemouth.

Markovic has versatility on his side, able to operate across the forward line, but finds himself challenging Sadio Mane, Adam Lallana and Sheyi Ojo for a role on the right flank.

Liverpool paid £20 million to sign Markovic from Benfica in 2014, and could take a sizeable hit on that fee if he is to leave this summer.