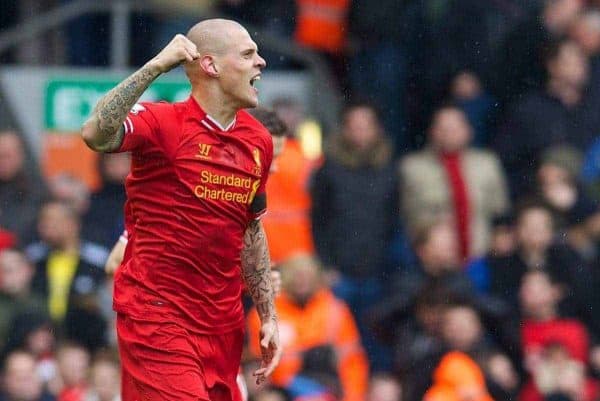 Martin Skrtel: “It was a pleasure and a privilege to represent Liverpool”

On sealing his £5.5 million move to Fenerbahce, Martin Skrtel has expressed his gratitude to his former club, Liverpool.

Skrtel completed his switch from Merseyside to Istanbul on Thursday afternoon, before being official unveiled on Friday.

The 31-year-old spent eight-and-a-half years with the Reds, making 320 appearances, but dropped down the defensive pecking order following the arrival of Jurgen Klopp in October.

Named the club’s Player of the Season for 2011/12, Skrtel played a key role in securing Liverpool’s last major trophy, scoring in their League Cup final win over Cardiff City in 2012.

Taking to Instagram on joining Fenerbahce, Skrtel thanked Liverpool and their supporters for their backing throughout his Anfield tenure.

“I would like to say a big thanks to all Liverpool fans around the world for the support they have shown to me and my family throughout eight-and-a-half years,” he said.

“It was a pleasure and a privilege to represent such a massive club as Liverpool FC. The club, city and fans will be in our hearts forever.”

Skrtel’s loyalty to the club is admirable, with few players remaining at Anfield for such a length of time, though his move to the Turkish SuperLig comes at a sensible juncture.

The Slovakia captain is poised to take up a regular role under Vitor Pereira at Fenerbahce, joining Simon Kjaer and fellow signing signing Roman Neustadter in a three-man defensive line.

Playing to his strengths as a no-nonsense centre-back could see Skrtel thrive in Istanbul.

Skrtel’s former Reds team-mates also paid their respects to the long-serving defender on Friday, with Lucas Leiva saying “my friend Martin Skrtel, I wish you all the very best in your new club.”

“Eight-and-a-half years of great service, solid man on and off the pitch,” Steven Gerrard added. “You will be missed mate. Good luck for your future.”