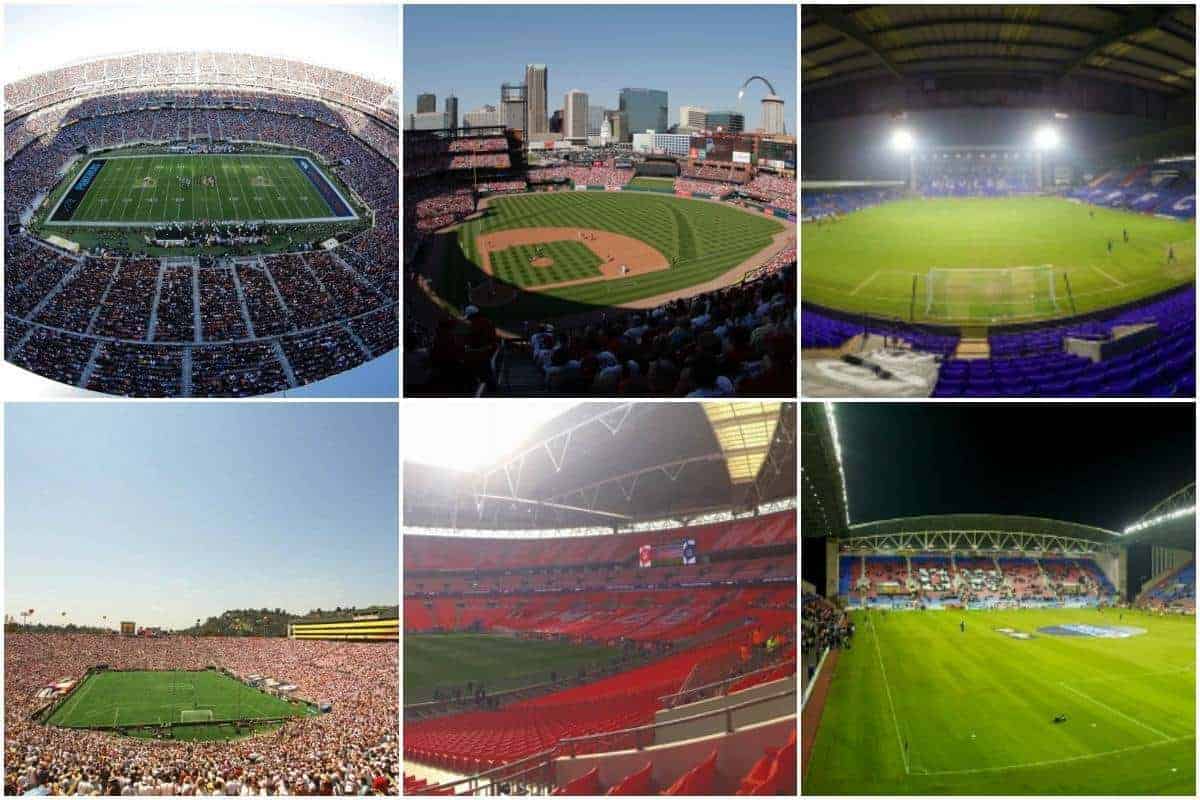 Liverpool’s preparations for the 2016/17 campaign will see the Reds play nine friendlies this summer, with some impressive and new venues set to host Jurgen Klopp’s side.

The Reds will once again clock up the miles this pre-season, travelling domestically and around the globe for vital match practice ahead of the new campaign.

Klopp’s side visit a host of stadiums along the way, with some spectacular grounds and first-ever trips to certain venues lying in wait.

Wherever the Reds play you can bet each ground will be packed out in support for Klopp’s men, and here are the nine stadiums Liverpool will be finding fitness and form at ahead of the big kickoff.

The Reds open with a trip to Prenton Park to face local neighbours, Tranmere Rovers.

Home to the Super White Army since its opening in 1912, the ground is certainly impressive for a current fifth-tier side, boasting a capacity of just over 16,500.

A big crowd is expected, including over 5,000 travelling Kopites for Liverpool’s first visit since 2008, when Rafael Benitez’s men ran out 1-0 winners in front of 15,000 fans courtesy of a goal from Yossi Benayoun.

Those with good memories will also recall Liverpool’s last competitive fixture at Prenton Park—that seeing a FA Cup thriller play out which the Reds eventually won 4-2 against a Rovers team managed by Anfield legend, John Aldridge.

STUNNING PITCH: It's a cracking day in Fleetwood and Highbury is in fantastic condition. #codarmy pic.twitter.com/4FnxowcPCn

Liverpool travel to Highbury, the lesser-known home of Fleetwood for their second friendly.

Opened in 1939, several renovations now sees the neat venue hold just under 5,400 fans, of which 2,672 can be seated—making this the smallest ground the Reds play at this summer.

The latest development saw the impressive Parkside Stand completed in 2011, with the modern infrastructure holding 2,000 seats alone, as well as boasting an upper tier of corporate boxes and hospitality.

The game is a sell-out, with Kopites having sold just shy of 1,600 tickets, and the travelling Reds will be housed in the usual areas for away fans—the Percy Ronson Terrace for just over 800 standing visitors, and a section of the Parkside Stand.

It will be the first time the Reds have played the Cod Army on their own patch despite being the second game between the clubs who last met in August 2003.

Liverpool won 6-1 on that occasion in front of an 8,000-strong crowd at Blackpool’s Bloomfield Road, with goals from El Hadji-Diouf, Bruno Cheyrou, John Welsh, Anthony Le Tallec and a brace from Milan Baros.

A ninth trip to the DW Stadium for the Reds follows as they take on the Championship newcomers.

Known as the ‘JJB Stadium’ from its 1999 opening, the ground was renamed the DW Stadium a decade later in association with DW Sports Fitness, founded by former Wigan chairman, Dave Whelan.

It has also been the home of Rugby League side Wigan Warriors since its opening 17 years ago.

The former Premier League club boast a capacity of 25,138 making it the biggest club stadium Liverpool play at on English soil this pre-season—which is expected to sell-out for the clash.

The 4,800 travelling Kopites will be housed in the usual stand behind the goal for the first trip since March 2013, when the Reds hammered Wigan 4-0 thanks to Stewart Downing and hat-trick from Luis Suarez. In fact, the Reds have only taken to the Terriers’ home ground once, that coming in a 2-0 FA Cup win in 1999 when the ground was known as the McAlpine Stadium.

Opened in 1994, the 24,500 capacity venue is also home to Rugby League side Huddersfield Giants, and has previously hosted numerous Rugby League World Cup games over the years.

A crowd of around 20,000, including 3,800 Reds, is expected for what will be the first-ever friendly between the clubs, as Klopp locks horns with former Borussia Dortmund reserve team coach and friend, David Wagner.

This will be Liverpool’s last clash in England before jetting off to America for more glamorous games. Liverpool’s opening US fixture could not come at a more spectacular setting, with the Reds facing Chelsea at the historic Rose Bowl Stadium.

The huge 95,524 multi-purpose arena is mainly known for its hosting of American football—holding the annual ‘Rose Bowl Game’, five Super Bowl contests, and housing the UCLA Bruins since 1982.

A whole host of concerts have also been held at the stadium which stands as one of the world’s most impressive venues, and it provides a magnificent stage for the first of Liverpool’s three International Champions Cup (ICC) games.

Visiting the stadium that hosted the 1994 World Cup final and 1999 Women’s World Cup final will be a first for Liverpool, though it will be the second ICC game held there, with LA Galaxy playing Barcelona last year.

Playing on such a stage, Klopp will want to make it a debut to remember. Liverpool stay in California for their second ICC clash against fallen Italian giants, AC Milan, to be played at another impressive venue in the Levi’s Stadium.

An extremely new build having opened in July 2014, it boasts a lesser but nonetheless impressive 68,500 capacity, which can be expanded to 75,000 for certain events, as it was for Wrestlemania 31 in 2015.

The stadium has held numerous concerts and even NHL games, while last year it hosted its first ICC match between Man United and Barcelona.

The visit will be a first for Liverpool who seek a second ICC win over Milan, having beaten them 2-0 in 2014. Liverpool sign off their US tour in St. Louis against fellow Serie A side Roma at another new arena in the Busch Stadium.

The final friendly before the Reds return home will feature at the traditional baseball park, home of MLB side St Louis Cardinals.

The relatively new ground opened just 10 years ago, and with a capacity of just over 46,800, provides another fine spectacle for a friendly sandwiched between the Reds’ ICC fixtures.

The ground has hosted only four football matches since its opening, including games for USA’s men and women’s teams, with a friendly between Man City and Chelsea in 2013 the first.

Having lost to Roma the two previous US tours, Klopp’s side will be looking for revenge in their first visit to the venue.

Liverpool’s most anticipated pre-season clash comes at arguably the most iconic setting, in the Home of Football.

The Reds return to Wembley—the second biggest venue they play at this summer—for their penultimate warmup game against Barcelona, as two European football giants meet for the final ICC clash in front of a sell-out 90,000 crowd.

Home to the England national team, the stadium hosts its first ever ICC game and will provide a stunning spectacle for the likes of Lionel Messi, Neymar and Luis Suarez—who could make his first appearance against the Reds since leaving—and Klopp’s men to star.

The game will see Liverpool play at Wembley for the second time under Klopp’s guidance, having missed out on League Cup glory on penalties against Man City back in February.

With a sizeable travelling Kop to descend on ‘Anfield South’, Klopp hope for a better result against the Catalan side.

Thanks for everything, @coface!
Welcome to the #OpelArena! @Opel pic.twitter.com/hFOqo93A23

Liverpool round off pre-season in Germany against Klopp’s former club, Mainz 05, at the newly named Opel Arena.

Formerly known as the Coface Arena, the neat, modern venue was built five years ago with a 34,000 capacity—which reduces to 26,000 for international games—of which 19,700 spaces are seated.

Liverpool’s only previous visit saw the Reds play at the old Bruchwegstadion in 2006—a night the Germans, then managed by Klopp, thrashed Benitez’s men 5-0.

It promises to be a special occasion for Klopp on his return to the club where he enjoys legend status, as well as for new Reds goalkeeper Loris Karius, who recently joined from Die Nullfunfer.

Klopp will hope to mark his return with similar success before the serious stuff starts.