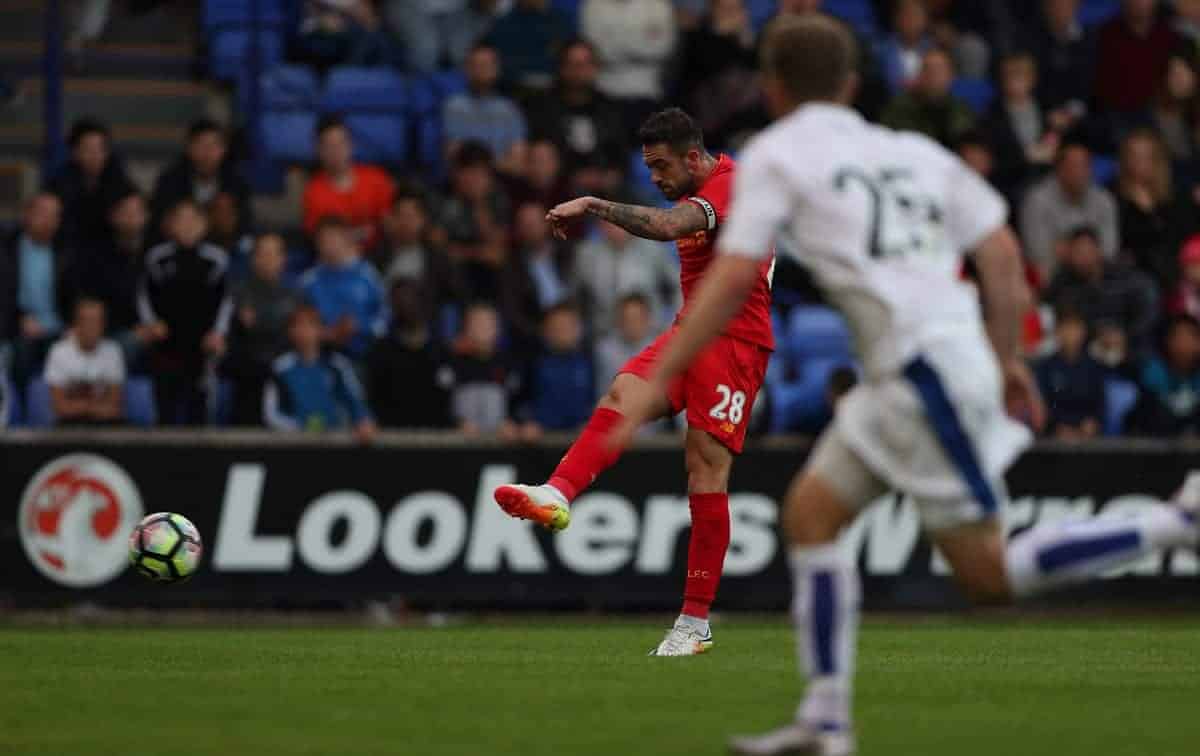 Sadio Mane, Loris Karius and Joel Matip all made their first starts for the Reds, whilst youngster Ovie Ejaria was given his opportunity to shine.

The Reds’ new centre-back, Matip, made his presence known from the off, smashing into a Tranmere player within minutes of kickoff; Ejaria and Cameron Brannagan both saw a lot of the ball early on too—and it was a terrific performance from the two youngsters.

The first chance of the game fell to Brad Smith though who, like much of last season, drove at the full-backs and cut inside to fire the first shot of the game into the chest of Scott Davies.

The deflection bounced off the goalkeeper dangerously, but it was cleared just in time by the Tranmere defence.

Firmino—one of the more established players on the pitch—then scuffed a chance to shoot when he produced an air shot in the box. Kent picked up the pieces though and the academy player tried a delightful curling shot into the top right-hand corner of the goal, but it flew just over.

Liverpool were pressing high up the pitch within the first few minutes, as could be expected, but they left themselves open a little in the middle and on 10 minutes, Tranmere had their first opportunity of the game to get behind the Premier League side’s defence.

Liverpool’s big new signing, Mane, was quiet in the opening minutes, despite making a number of runs off the ball down the right wing. The £30 million man almost had a chance when Ejaria lifted a ball over the top to run on to—but it ultimately proved too long.

The former Southampton forward effectively caused havoc for defenders last season by running in behind them and it’s certainly something Liverpool will look to exploit this year.

It was a nervy performance for Matip at times and it was his misplaced pass which gave Tranmere their first opportunity after the first 15 minutes.

The shot from outside the box was just over the bar but it was a good chance for the home side to test Liverpool’s new keeper.

Brannagan and Ejaria really started to dominate the play and towards the end of the first half were dictating the tempo of the game and its direction. Mane looked bright and caused the Tranmere defence some problems with his quick feet and darting runs around the box.

The striker’s best chance fell later in the first half when he found himself one-on-one with the Tranmere keeper but was unable to put the ball past him as Davies made a good save to his left to deny the new signing.

There was some good linkup play between Firmino and Mane too, as they started to get their rhythm.

Liverpool did have a scare midway through the first half when Tranmere’s new signing, Connor Jennings, found the ball at his feet with space in the box after Liverpool failed to deal with a cross, and his shot fired back off the post as the home side nearly took the lead.

However, it was Liverpool who went into the half-time break having the best chances, with Mane’s one-on-one providing the best of them.

The Reds finished the half with Kent, Brannagan and Ejaria providing the standout performances as Klopp made eleven changes to give all his players a run out.

Ings made an appearance after the break, taking the captain’s armband from Lucas Leiva, and there were also returns for Liverpool’s £20 million winger Lazar Markovic and perennial loanee Andre Wisdom.

It was a bright start from the much-changed lineup and Liverpool looked to have quickened the tempo since the first half.

They mounted pressure on the Tranmere defence and after building up the attack nicely, Trent Alexander-Arnold had his first shot of the half, but it was always rising and flew just over the bar.

Ings then played a delightful ball into the penalty spot to try and find 16-year-old Ben Woodburn, but the Tranmere keeper was quick off his line to deny the youngster coming in off the left wing.

Tranmere then received two free-kicks in good positions as fouls from Wisdom and Alberto Moreno gave them the opportunity to test the Liverpool defence—but both efforts were dealt with comfortably by Klopp’s new-look back four.

Markovic had his chance to shine after 60 minutes when the ball was delivered into the box from the right by Woodburn, but he snatched at his shot and hit it well over the bar, encouraging groans from the Liverpool supporters and jeers from the opposition.

Ings continued to cause problems, driving through the middle and finding himself one-on-one with the Tranmere keeper. His shot was well saved but it was deflected into the path of Markovic who, with an open goal, blasted the ball against the right post.

The winger should have scored and he’ll have to do better than that this season if he hopes to push his way into the starting lineup.

Woodburn then produced a wonderful ball over the top to Alexander-Arnold, who initially looked to have wasted the opportunity with a poor touch but he managed to loft a ball into the box and Ings’ powerful header was just over the bar.

Ings’ goal threat continued and he almost produced a magical strike as his flamboyant overhead kick flew just wide of the Tranmere post.

However, the striker didn’t have to wait long for another opportunity as he was gifted with a perfect chance when Alexander-Arnold’s terrific run opened up a shooting opportunity inside the area—and the former Burnley man didn’t disappoint.

Overall, it was a dominant display from a youthful side with Ings, Brannagan and Ejaria providing the highlights in a positive performance.