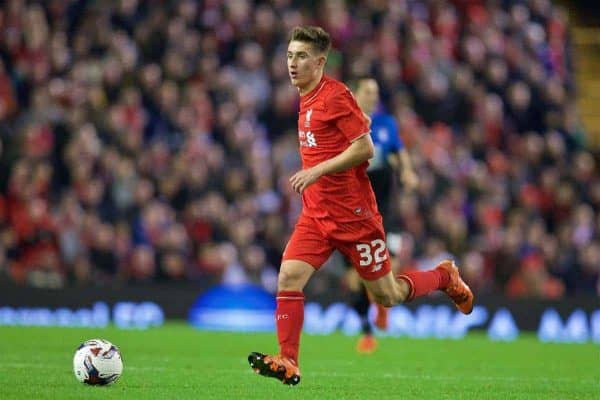 Cameron Brannagan will not be completing Wigan loan move

Liverpool midfielder Cameron Brannagan was expected to complete a loan move to Wigan Athletic but the Championship side have pulled out of the deal.

The 20 year-old was expected to spend this season at the Latics after an agreement between the two clubs was reached earlier in August.

But the Liverpool Echo reports that Wigan have decided to back out of the agreement due to concerns about committing to the demand that Brannagan plays in 75% of their games this season.

If Wigan were unable to uphold this they would have faced the prospect of having to pay a six-figure fee.

It has been reported this summer that Liverpool are, wisely, placing such clauses in loan agreements to avoid talented youngsters sitting on the bench at their temporary clubs.

Brannagan featured heavily during Liverpool’s pre-season campaign early on and made nine appearances under Jurgen Klopp during the later half of last season.

The academy graduate played in three Premier League clashes including as sub against Swansea City and Watford and starting at West Brom in May.

He impressed in his performances, demonstrating composure and a wide passing range and was particularly effective when he played in the cup against West Ham and Exeter at Anfield.

Brannagan’s future under Klopp is promising and the German boss has expressed his admiration for the midfielder.

However, it’s unlikely Brannagan will get much game time for Liverpool this season in the first team and Klopp hoped a loan spell would give the youngster valuable experience and an opportunity to build up some senior appearances.

While the move to Wigan hasn’t materialised, Liverpool will be looking for a new club, ideally in the north-west and ideally still in the Championship, to take Brannagan for the season.