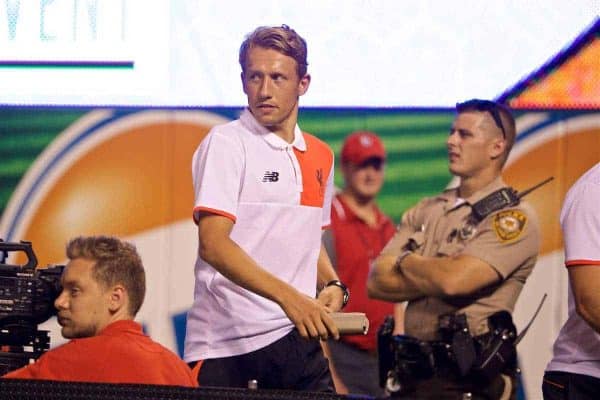 Despite Galatasaray’s interest in Brazilian midfielder Lucas Leiva, Liverpool are reluctant to sanction his departure at this stage.

The Turkish giants have pursued Lucas throughout the summer, with manager Jan Olde Riekering confirming his interest in the 29-year-old last week.

A move to the Turk Telekom Arena would suit Lucas, whose first-team prospects on Merseyside are looking slim ahead of 2016/17.

But with Jurgen Klopp currently struggling with injuries to Mamadou Sakho, Joel Matip and Joe Gomez, the German won’t let Lucas leave before he is able to acquire reinforcements.

According to the Liverpool Echo, Klopp “knows he probably won’t be in a position to offer Lucas the kind of game time he wants this season.”

However, with only Dejan Lovren, Ragnar Klavan and Andre Wisdom currently available at centre-back, he will remain at Anfield until the last days of the transfer window.

Lucas is in the final year of his contract, and as with Joe Allen the club would likely rather cash in on their bit-part midfielder than allow him to leave on a free next summer.

The Brazilian is the Reds’ current longest-serving player, and the only player to remain from Rafa Benitez’s squad from 2009/10.

Liverpool are unlikely to recoup a sizeable amount for Lucas, with Galatasaray reported to be looking to seal a deal worth around £2.5 million.

Lucas also faces competition from Emre Can, Jordan Henderson, James Milner, Marko Grujic, Kevin Stewart and Cameron Brannagan among others for a starting role in midfield, and would only play a peripheral role this season.

Meanwhile, Galatasaray have been looking for a replacement for Felipe Melo since the 33-year-old’s departure to Inter Milan in 2015.

Likely offered the game time he is looking for in Istanbul, Lucas would likely be in favour of a move if Klopp is able to secure at the back, or any of Matip, Sakho or Gomez return.