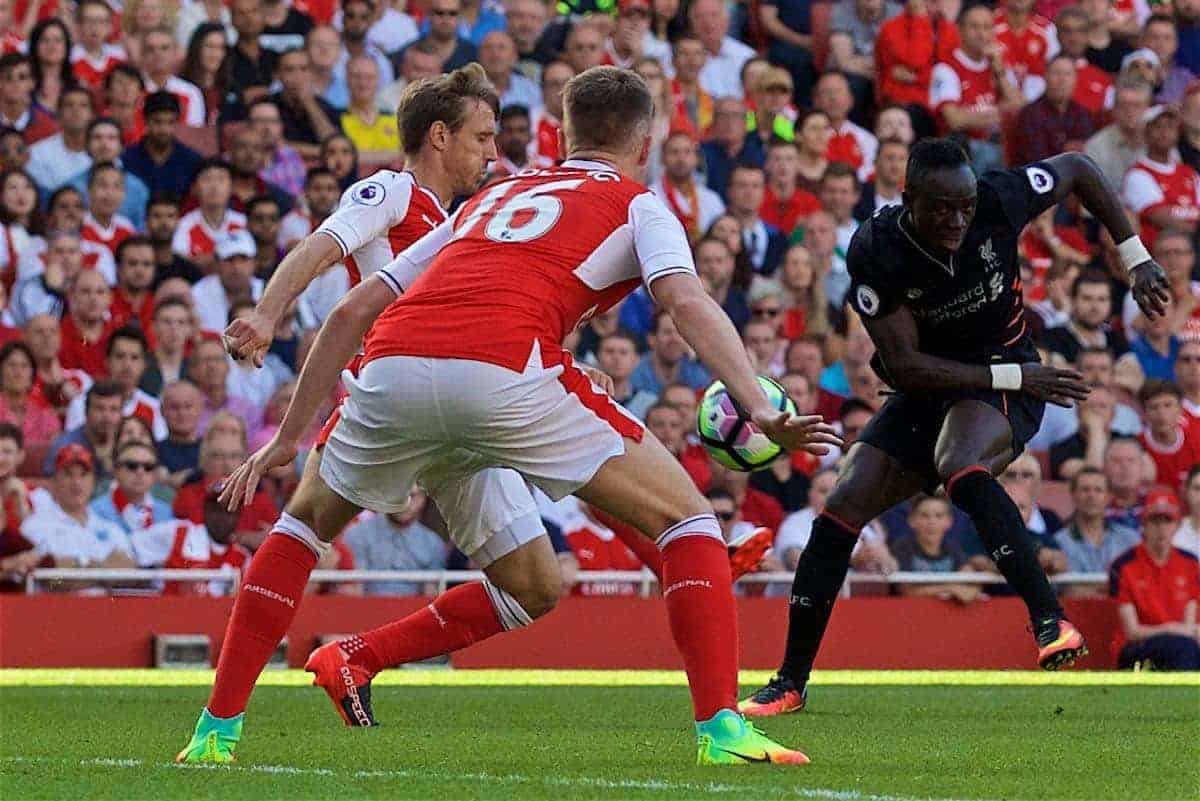 Following an impressive full debut for Sadio Mane against Arsenal, we select 10 Liverpool players who shone on their first Reds outing.

Having arrived from Southampton for £30 million earlier in the summer, Mane produced a fantastic performance at the Emirates, rounding it off with an early Goal of the Season contender.

Arsenal struggled to live with the 24-year-old’s pace and movement all afternoon, and it was a display that should get every Liverpool supporter excited about his future impact in the team.

It was arguably the best Reds debut for many years, but who else stood out on their Liverpool bow?

Here are 10 of the best from the Premier League era (full debuts, not just league):

He may be a rather shaky presence in the Liverpool goal at times, but Simon Mignolet‘s debut ended with him as the undisputed hero.

Brendan Rodgers’ men entertained Stoke City on the opening day of 2013/14, and Daniel Sturridge‘s goal looked to have earned the Reds a 1-0 victory.

Daniel Agger’s late handball gifted Stoke a penalty, however, with boyhood Evertonian Jon Walters given the chance to level the scores.

Mignolet produced a great stop down to his right, though, sparking wild celebrations inside Anfield from players and fans alike.

We thought we’d signed Manuel Neuer at that point in time!

In that same match, Kolo Toure made his first appearance for the club, having joined on a free transfer from Man City.

Fans weren’t exactly blown away by the move, given Toure’s advancing years, but a very impressive debut helped Liverpool keep a clean-sheet.

The Ivorian was an inspirational rock at the heart of the defence, and he was also desperately unlucky not to score, with a first-half effort cannoning of the crossbar.

Toure rarely let Liverpool down during his three years on Merseyside, and his debut was one of his strongest displays in a Reds shirt. It is always more difficult for defenders to receive the plaudits of attacking players on their debut, but Rob Jones’ first Liverpool match was something special.

The right-back was thrown in at the deep end and tasked with stopping a young Ryan Giggs in 1991, but he passed with flying colours.

Giggs, the undisputed emerging talent of British football at that point, barely did a thing all game, and Jones was immaculate. He had only signed from Crewe Alexandra two days earlier.

Had it not been for horrific luck with injuries, Jones would have been one of Liverpool’s all-time great full-backs.

Big things were expected of Nigel Clough when Graeme Souness brought him to Anfield in 1993, due partly to his talent and also because of his father Brian’s stature in the game.

Signed for £2.25million from Nottingham Forest – a lot of money in those days – it was hoped that Clough would help Liverpool return to the summit of English football.

He made a dream debut against Sheffield Wednesday at Anfield, with a goal either side of half-time inspiring the Reds to a 2-0 win.

Unfortunately, Clough never really kicked on, and his time at Liverpool will always be seen as something of a disappointment.

There is nothing better than seeing a local youngster awarded his debut, but most of the time, their performances are understandably nervy and ineffective.

Jordan Rossiter’s Liverpool bow was the quite the opposite, however, on what was a memorable evening against Middlesbrough in the League Cup third round in September 2014.

After 10 minutes, Rossiter pounced on a loose ball outside the penalty area, and with ‘Boro goalkeeper Jamal Blackman stranded, the 17-year-old finished clinically into an empty net.

He wheeled away in delight, and went on to enjoy a very effective all-round performance. He even converted his penalty in the eventual 14-13 shootout triumph.

There was huge excitement went Stan Collymore moved to Liverpool from Forest in the summer of 1995.

The mercurial striker cost a then British transfer record of £8.5million, and he was seen as someone who could help the Reds win a first Premier League title.

His debut was certainly one of the more eye-catching of the Premier League era, and he was the difference in a 1-0 win over Wednesday on the opening day of the 1995/96 campaign.

Twisting and turning 30 yards from goal, Collymore eventually let fly with a superb left-footed shot, and it nestled into the corner of the Anfield Road net.

It felt as though the Reds had signed a real superstar, and while the striker shone at times during his two years at Anfield, he never reached his enormous potential.

Michael Owen was being spoken about long before his Liverpool debut, and was seen as one of the most talented youth products in the club’s history.

With the Reds trailing 2-0 at Wimbledon in May 1997, Roy Evans decided to bring on the baby-faced 17-year-old, and his impact was immediate.

Evans’ men may have still lost the game (and their slim title chances), but it was clear that a very special young player was about to become a superstar.

Like Owen, Robbie Fowler was a prodigious talent coming through the youth ranks, and his goalscoring exploits were almost the stuff of legend.

Having been named in the starting line-up away to Fulham in the League Cup in September 1993, Fowler’s moment to treasure came after 83 minutes.

A typically emphatic half-volleyed finish from close-range put Liverpool 3-1 up on the night, and a new star was born.

Things got even better for the Toxteth prodigy when he scored five goals in the return leg a fortnight later! Luis Suarez may not have been the phenomenon that he is today when he moved to Liverpool in January 2011, but he was still a very talked-about footballer.

The ridiculous £35million signing of Andy Carroll on the same day almost put Suarez’s £22.8million move in the shade, but he enjoyed a memorable debut.

‘El Pistolero’ was introduced after 63 minutes against Stoke at Anfield, with the Reds leading 1-0, and he took no time to make himself an instant hero.

With 11 minutes remaining, Suarez took the ball past Asmir Begovic, and his finish trickled into the back of the Kop net, despite Andy Wilkinson’s best efforts.

Nobody predicted what was to come from Suarez!

Opinion was split when Liverpool decided to sign Daniel Sturridge from Chelsea in January 2013, with the Englishman’s career in danger of going stagnant.

On his first appearance in a Reds shirt, though, it was clear that Rodgers had signed an absolute gem of a player.

Sturridge was named in the team to face Mansfield Town in the FA Cup third round, and within seven minutes, he had already scored his first Liverpool goal.

Jonjo Shelvey’s through-ball was inch-perfect, and the striker finished clinically with his weaker right foot. It set the Reds on their way to a 2-1 victory.