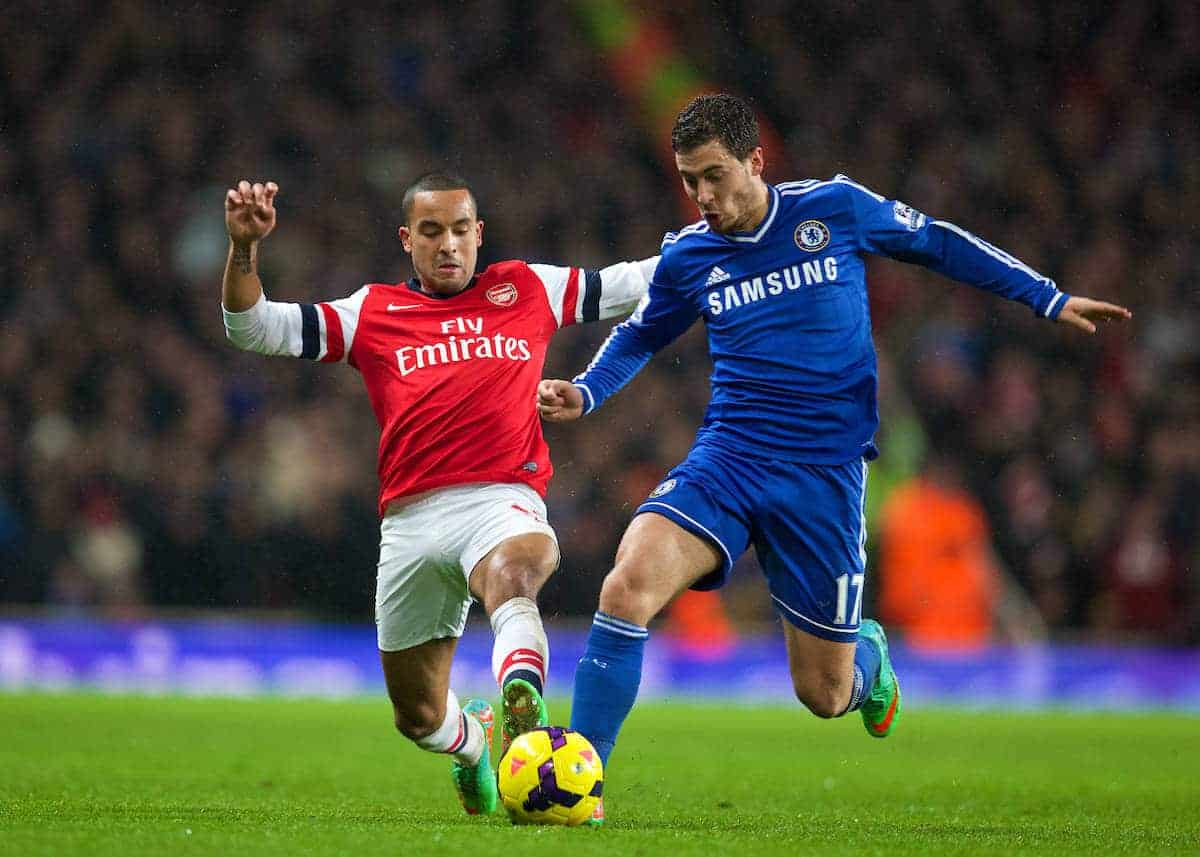 There’s a feast of Premier League football to look forward to this weekend, particularly on what could be a thrilling Saturday.

Liverpool kicked of last weekend’s schedule with a richly-deserved 2-1 win at Chelsea on Friday, thanks to goals from Dejan Lovren and Jordan Henderson.

Reds supporters could then sit back and enjoy what was a very entertaining couple of days.

Man City kept up their 100 per cent start with a 4-0 drubbing of Bournemouth, but for rivals Man United it was a horror-show, as they lost 3-1 at Watford.

Arsenal won comfortably at Hull City, Tottenham edged out Sunderland at White Hart Lane and Everton continued their good start with victory at home to Middlesbrough.

Stoke still prop up the table, having been soundly beaten by Crystal Palace, while David Moyes’ 19th-place Sunderland are also on just one point.

West Ham‘s surprisingly poor start to the campaign sees them complete the current relegation zone, after their insipid 4-2 defeat at West Brom.

There are 10 more Premier League matches to look forward to over the next three days – here is some of the key action to look our for.

Clashes between Arsenal and Chelsea have always been fierce affairs, and this one should be no different.

It is a great chance for both sides to show that they are capable of a title challenge this season, with the league looking as open as ever in 2016/17.

Arsenal have not beaten their London rivals in the league since October 2011 – their only win in that time was the 2015 Community Shield – but there is a feeling that they are due a victory.

Arsene Wenger’s men have recovered well after their 4-3 defeat to Liverpool on the opening weekend, and the home advantage may well prove key on Saturday evening.

Chelsea have flattered to deceive in the first month or so of the season, and a second successive league defeat would suddenly crank up the pressure on Antonio Conte.

Whatever happens, there is bound to be controversy.

Can Man City Be Stopped?

It was clear that Man City were getting a special manager in Pep Guardiola, but not many expected him to make such an immediate impression.

His side have looked sensational so far this season, winning all of their nine matches across three competitions, and the bookies already have them odds-on for the title.

With Kevin De Bruyne playing as well as any player in the league, Raheem Sterling back to his best and David Silva and Sergio Aguero still wonderful players, they will take some stopping.

Guardiola’s side make the trip to Wales to face Swansea City on Saturday, which on paper, should be another relatively routine City win.

The Swans have got just four points from their opening five matches, and they don’t look a side who will cause the top teams too many problems in the coming months.

The rest of the league will be willing on the hosts, but City look too good for there to be an upset.

After three wins on the bounce, everything looked rosy for Jose Mourinho, as Man United‘s three years of mediocrity looked to be a thing of the past.

All of a sudden, however, things have unravelled, with three defeats in the space of eight days, including a sobering afternoon against rivals City.

It would be wrong to suggest a full-blown United meltdown is imminent – they steadied the ship slightly with a 3-1 win at Northampton Town on Wednesday – but things don’t seem right both on and off the pitch.

A lack of cohesion is there for all to see, with Wayne Rooney anonymous, Paul Pogba struggling and the style of play very one-dimensional.

United welcome champions Leicester City to Old Trafford on Saturday lunchtime, and a huge response is needed by Mourinho and his players.

The Foxes will hope to play better than they did at Anfield a fortnight ago, and if they can strike early, the home side will really be tested. Ronald Koeman was an excellent managerial appointment by Everton in the summer, even if it may pain Liverpool fans to admit it.

The Reds’ local rivals have picked up four wins and a draw from their opening five league games, and while it hasn’t been a difficult start, they look made of sterner stuff than under Roberto Martinez.

Idrissa Gueye looks an inspired signing in defensive midfield, and Koeman appears to be getting the most out of the key players who sometimes underperformed last season.

Everton take on Bournemouth at Dean Court on Saturday, which will not be easy.

Eddie Howe’s team may be 17th in the table, but they won their last home game 1-0 against West Brom, and will believe they can cause an upset.

It is matches such as these where we will find out whether or not Everton are capable of a top-four challenge this season.

Over the past two years, few players have been as influential to their team as Harry Kane has to Tottenham, with the England striker scoring 61 goals since the start of 2014/15.

An ankle ligament injury has ruled Kane out for the foreseeable future, however, and there are many who believe Spurs could struggle because of it.

It is a great opportunity for Mauricio Pochettino to show he has a strong enough squad to cope without their talisman, with Vincent Janssen likely to be the man to step in.

First up for Kane-less Spurs is a trip to Middlesbrough on Saturday afternoon – a game which any neutral would expect the north London club to win.

Aitor Karanka’s newly-promoted outfit don’t look an easy team to beat, however, and should Spurs’ attack fail to fire, predictable accusations of being a “one-man team” will come their way.