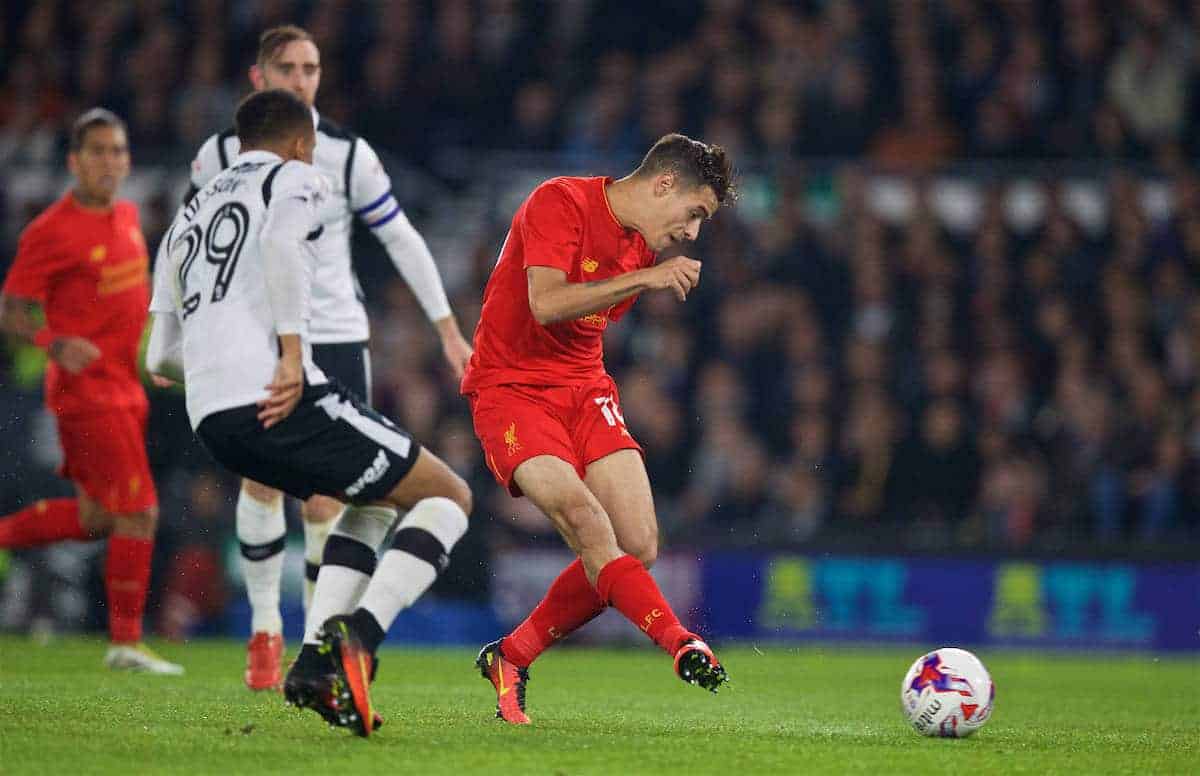 One goal and two assists from Philippe Coutinho fuelled Liverpool’s 3-0 win over Derby County in the third round of the League Cup.

Taking to Pride Park for their third-round clash with Derby on Tuesday night, Jurgen Klopp‘s Liverpool lined up against Championship opposition for the second time this season.

After making just four changes for the Reds’ second-round victory over Burton Albion, however, the German employed heavy rotation, with seven changes including a debut for goalkeeper Loris Karius and a first start for fellow arrival Marko Grujic.

Coutinho and Roberto Firmino were among the key names to be included, however, with Klopp keen to secure victory as Liverpool push for a second successive League Cup final.

Taking on a Rams side in poor form and markedly shy in front of goal, Klopp’s side will have been confident heading into the clash, and this proved to be well placed as they emerged victorious in Derbyshire. Dominating from the first whistle, the Reds looked to overwhelm a shaky Derby defence, with Firmino taking up his position on the left, with Coutinho on the right.

It was Coutinho’s right-footed delivery, from a corner, that led to Liverpool’s opener, with Ragnar Klavan hooking home following a poor attempted clearance from Richard Keogh, finding the back of the net through a deflection from Cyrus Christie.

Divock Origi, leading the line in his second start of the season, came close on a number of occasions, most prominently after twisting into space in the box, but his left-footed shot was palmed away by goalkeeper Jonathan Mitchell.

Coutinho saw his late free-kick soar just over the bar minutes before half-time, as Klopp’s side looked to add a flourish to what was a controlled first-half display.

Karius, who enjoyed a relatively quiet first half, was called upon just before the break following a poor pass from Jordan Henderson, storming off his line to deny an onrushing Darren Bent, preserving the Reds’ 1-0 lead.

Picking up where they left off after the interval, it took Liverpool just over four minutes to notch their second of the night, with Coutinho interchanging excellently with his compatriot Firmino before passing the ball home.

Both Coutinho and Firmino were in inspired form throughout, and four minutes later the Reds had their third of the night, this time with the former laying it through for Origi to rifle into the top corner.

Firmino almost added a fourth on the hour mark, but Mitchell was on hand to make a strong save, before Klopp withdrew Coutinho to a standing ovation, allowing Danny Ings his first outing of the season.

Despite continuing to control the game, Liverpool failed to test Mitchell any further, instead playing it out to a comfortable win—and the fourth round awaits.