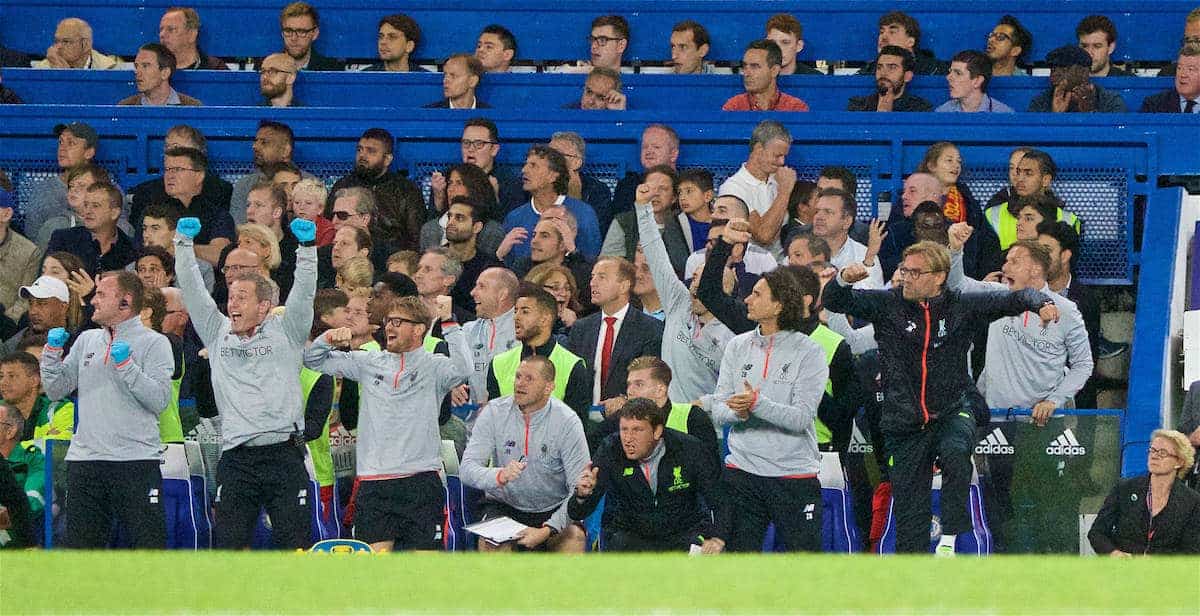 The Reds ran Chelsea ragged in a blistering first half and led thanks to goals from Dejan Lovren and Jordan Henderson. They then showed their defensive mettle to hang on for a deserved 2-1 victory after Diego Costa halved the deficit.

And the Anfield boss Klopp beamed afterwards: “The beginning was brilliant. We played football like hell! It was very intense, very lively, very flexible, our build-up was brilliant in the first half.

“I was really happy with the style of play, and the confidence we had.”

Chelsea handed a second debut to deadline-day signing David Luiz, in place of the injured John Terry, but defensively they did not impress.

They should have dealt better with Philippe Coutinho‘s cross, which could have been put in by any one of four unmarked Liverpool players with Lovren doing the honours.

Henderson’s goal was a stunning strike from 30 yards, but it came from a poor clearance by Gary Cahill after Chelsea failed to deal with a throw-in.

“In the first half we gave away two goals,” admitted Blues manager Antonio Conte.

“When you give away two goals in this way it’s very difficult. Against Liverpool these are tough games. You must pay attention in every second of the game because details make the difference.

“We paid a lot. We were losing 2-0 and it was difficult. We scored the goal in the second half and we had the chance to draw but it was late. “It’s not important that it’s my first defeat, it’s our first defeat – a Chelsea defeat.

“It’s important to understand that every game is tough and we mustn’t forget last season. Last season was a bad season and I don’t want to repeat it.

“When you finish the season in 10th place it means you have to work very hard to improve and not repeat the bad season. This season the manager, the players, all the people at the club must take responsibility. We win together and we lose together.”

Costa had been feeding on scraps for an hour until he tucked in his fifth goal of the season from Nemanja Matic’s pull-back. Yet it was Liverpool who came closest to scoring the game’s fourth goal when Divock Origi‘s header was kept out by Thibaut Courtois.

Klopp may have got carried away with his side’s first-half display, but he was not making the same mistake about his side’s prospects this season.

“Are we title contenders? Someone asked me that when we won 3-1 here last season. My answer was: ‘Are you crazy?’ “We have 10 points. That’s fantastic. I’m really happy with that after these difficult fixtures. We know we can play good football, we’re convinced about our quality. We just have to do it every week, every three days.”